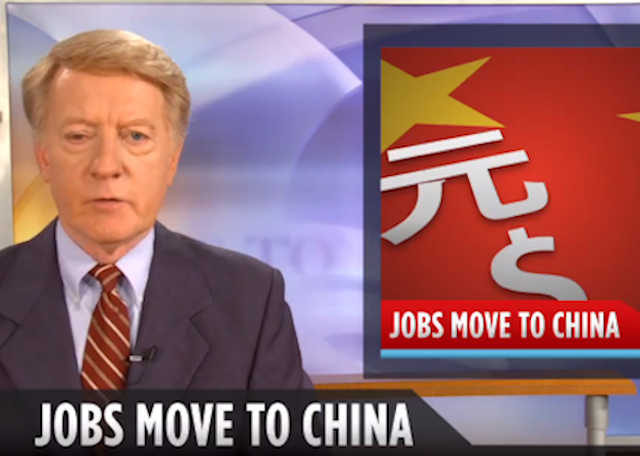 A screenshot from a recent Obama ad depicting a hypothetical Romney presidency.

The U.S. presidential election will finally conclude tomorrow in what will be either a "cliffhanger," likely Barack Obama victory, or Mitt Romney win, depending on your media source of choice. During the election cycle, "tough on China" rhetoric featured prominently in both candidates' campaigns, albeit with a much stronger focus on domestic repercussions than foreign policy.

"Clearly, these ads have very little to do with China itself. Granted, the campaign ad format doesn't lend itself easily to the complexity of our relationship with China — or really of any complex issue — but it's still a shame that we aren't having a more honest, informed national conversation about the nature of the global economy and China and the United States' roles in it," notes Susan Jakes, Editor of the website ChinaFile, a project of Asia Society's Center on U.S.-China Relations.

"Fortunately, the foreign policy of the Obama administration has maneuvered the often delicate relationship well, with a level of subtlety belied by the President's campaign ads. The question for voters is what to make of Romney's stance and whether he would modulate his strident tone if he were to be elected."

For those who feel they haven't been bombarded enough with fear-inducing ads this election season, Asia Blog has compiled a recap of the candidates' stances on China, distilled in 30-second ad form. We maintain no responsibility for feelings of extreme frustration and anger that may result from viewing all of them in one sitting.

One of Romney's main arguments in his job creation plan has been that he is going to prevent China from "cheating" and "stealing our jobs," which has conveniently shifted the blame away from his own profits from companies relying on foreign manufacturing.

The Obama campaign was clearly unwilling to let Romney's business connections slide, releasing multiple rebuttal ads. The one below criticizes him for profiting off Chinese manufacturing, an argument that was also pointed out by China's state-run media.

The campaign also pointed out Romney's opposition to Obama administration tariffs on tires manufactured in China — despite his statements that he would apply his own punitive tariffs to China's exports.

Although China was mentioned much more in debates about manufacturing jobs than about foreign policy, the Obama campaign didn't shy away from painting China as a security threat in an ad discussing Bain Capital's partnership with Chinese telecommunications giant Huawei, which has been accused by U.S. officials of having deep connections to the People's Liberation Army (PLA).

In the final days of the election, the idea of American manufacturing jobs being "lost" to China has remained a major point of contention, thanks to Romney's last-minute Ohio ads stating that Jeep was going to send manufacturing to China — prompting swift rebuttals from both GM and Chrysler.

The Obama campaign was equally quick to respond to the Jeep claims, hoping that Ohio voters will be convinced of their falsity.

To demonstrate the centrality of the "moving jobs to China" line, a more general Obama ad includes this rhetoric in a dramatized dystopian news broadcast that outlines the re-election campaign's most prominent criticisms of Romney's policies.

Just to provide some historical perspective, below is President Richard Nixon's Cold War-era campaign commercial, which ironically takes a much gentler approach to relations with China than Obama and Romney have decided to do during this election cycle. The ad features Nixon taking in the scenery at the Great Wall while delightful "oriental" music plays in the background, creating a much less ominous tone than today's ads: