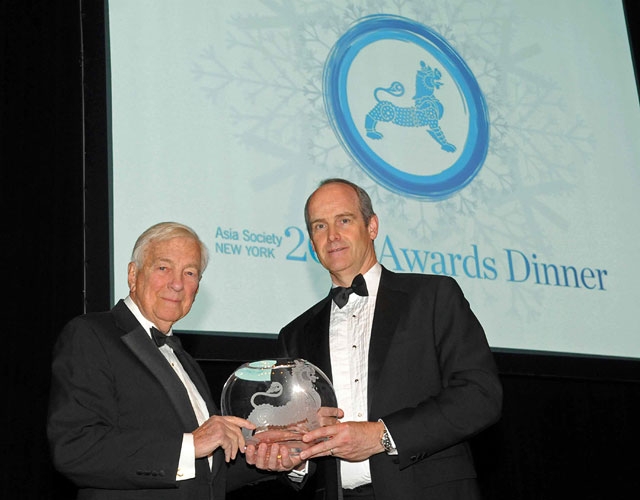 On the eve of his 90th birthday, former U.S. Under Secretary of State John C. Whitehead was recognized for his career in public life at Asia Society's 2011 Awards Dinner, held last night at the Waldorf=Astoria Hotel in Manhattan.

A former senior partner at Goldman Sachs, Whitehead was named Deputy Secretary of State by President Ronald Reagan in 1985 and remained in the position until January 1989. From late 2001 until July 2006 he served as Chairman of the Lower Manhattan Development Corp, the organization responsible for rebuilding lower Manhattan after the 9/11 terrorist attacks.

Speaking to an Awards Dinner crowd that included New York City Mayor Michael Bloomberg, former U.S. Treasury Secretary Hank Paulson and New York City Police Commissioner Ray Kelly, Whitehead said he was particularly gratified to be recognized by Asia Society. The reason, he explained, was that upon becoming Under Secretary of State, "I realized ... how little most Americans know about Asia — particularly we Easterners. We feel much closer to Europe."

A onetime Chairman of Asia Society's board, Whitehead said that the unmistakable eastward shift in the world's center of gravity, towards rising powers like China and India, has made it even more critical for Americans to educate themselves about that part of the world.

A decade into what will unmistakably be the Asian century, he said, "there is still lots of work for the Society to do."