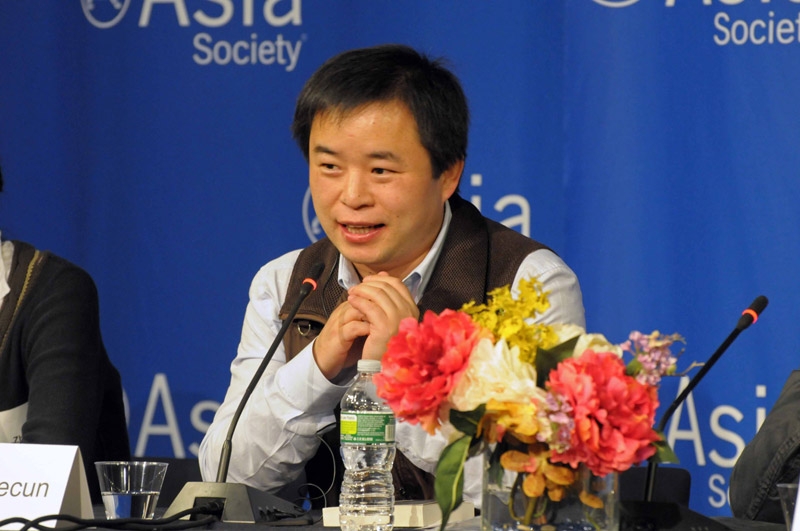 If you haven't already, go ahead and check out the excellent profile of Chinese author Murong Xuecun in today's New York Times. Edward Wong wrote the piece, which details how Murong's canny use of the internet — he now has more than 1.1 followers on Sina Weibo, a Chinese social media platform similar to Twitter — helped him cultivate a readership and dodge censors.

Murong, 37, spoke at Asia Society in New York over the weekend as part of our Chindia Dialogues, a platform for discourse between artists and intellectuals from China and India. You can see clips of Murong's appearance at Asia Society below.

Mr. Murong’s books are racy and violent and nihilistic, with tales of businessmen and officials engaging in bribe-taking, brawling, drinking, gambling and cavorting with prostitutes in China’s booming cities. He is a laureate of corruption, and his friends have introduced him at dinner parties as a writer of pornography.

That his books are published at all in China shows how the industry, once carefully controlled by the state, has become more market-driven.

But Mr. Murong’s prose inevitably runs up against censorship, which the Chinese Communist Party is intent on maintaining despite the publishing industry’s gradual changes. Mr. Murong says he is a “word criminal” in the eyes of the state, and a “coward” in his own eyes for engaging in self-censorship. His growing frustrations have pushed him to become one of the most vocal critics of censorship in China.

Later, Murong discusses the effects of China's censorship of his printed work:

“The worst effect of the censorship is the psychological impact on writers,” Mr. Murong said. “When I was working on my first book, I didn’t care whether it would be published, so I wrote whatever I wanted. Now, after I have published a few books, I can clearly feel the impact of censorship when I write. For example, I’ll think of a sentence, and then realize that it will for sure get deleted. Then I won’t even write it down. This self-censoring is the worst.”

Murong made an impression on his Chindia Dialogues co-participants, including Indian author Amitava Kumar, who posted dozens of tweets during the event and had this to say this morning:

Murong discusses the effect of censorship on creativity:

Murong discusses how the internet is fueling China's modern literature:

Here's a video companion piece to the New York Times story, produced by Jonah Kessel, who has worked with Asia Society in the past: