US Election Day in China Offers a Chance to Participate, Vicariously 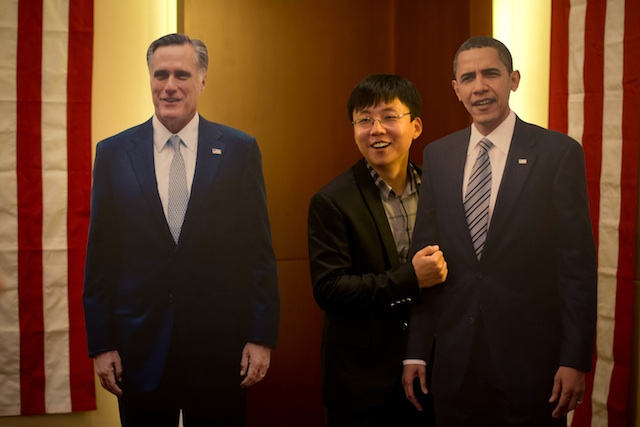 A man poses with cardboard cut-outs of U.S. President Barack Obama (R) and presidential candidate Mitt Romney (L) at a hotel during a U.S. presidential election results event organized by the American embassy in Beijing on Nov. 7, 2012. (Ed Jones/AFP/Getty Images)

I was in Shanghai, eating lunch with friends at a wonderful alleyway restaurant called Mi Xiang Yuan, when I got the welcome news of Obama's re-election. One member of our party, a local food writer who had earlier told me of doing her bit to help the President stay in office by casting an absentee ballot for him, had kept checking her phone for updates from the time we began our meal. She figured — correctly, as it turned out — that the election was likely to be called a little after noon Chinese time November 7, which was late night November 6 in the United State. I let out a sigh of relief when her face lit up and she told all of us at the table that she'd just started getting texts from people she knew saying CNN had called the race for the incumbent.

Our table was the only one with foreigners at it, but looking around I realized that we weren't the only ones in Mi Xiang Yuan who were interested in what was happening across the Pacific. Right next to us, for example, were two young Chinese men following election news on a smart phone they held between them, and I could tell from overhearing snatches of their conversation that they were intensely interested in the reports that were just coming in about Obama's victory. I couldn't tell for sure if they were pleased or displeased by the results, but there was no mistaking their fascination with the process. And it is worth noting something I never heard either of them mention: the upcoming 18th Party Congress. This was scheduled to start the next day in Beijing, and during its course, as they doubtless knew, a formal announcement would be made about who would hold the top positions of power in their country for years to come. One might imagine that, for young people with politics on their minds, this might get a word or two in their conversation over lunch. If either of them said a word about it, though, I must have missed it. I doubt I did.

The reason I say this is that, throughout that short trip to China, I tried multiple times to get local newspaper sellers, taxi drivers and other people I struck up conversations with on the streets to give me their opinions on the American and Chinese political stories of the moment. Not a single one had or at least admitted to a strong opinion of any kind about the 18th Party Congress, but each became animated when I invited them to talk about the Obama-Romney race. I heard people tell me why they thought it would be good if Obama stayed in office, and I heard people tell me why they thought it might be best if Romney got a chance to do something about the American economy. What I couldn't get anyone to do was venture an opinion about whether Xi Jinping would be much different from Hu Jintao. No one seemed to even have a strong feeling about how one Chinese leader's style differed from the other's, while they could weigh in on such arcane matters associated with the American electoral process as the various scenarios that would lead to the election being called quickly or a final result not being clear for a couple of days.

One contrast between the Chinese and American systems is obvious and is often noted — in the former, only a tiny percentage of the population gets to have any kind of say on who ends up in the top posts. But as Tong Lam, a University of Toronto specialist in modern Chinese studies who was at that November 7 lunch with me pointed out to me later that day, when we were both waiting to get on different planes to whisk us back to opposite ends of North America, there is an additional contrast worth noting beyond the fact that only people in one country get to vote. "There's no way for ordinary Chinese to participate, even as engaged spectators, in the Eighteenth Party Congress," he said. Thinking about this, I realized that may indeed be part of the fascination with the American election in China. It was not just about voting versus not voting, not just about how a Romney administration might have altered the course of relations between Washington and Beijing. There was more to it.

Without a sense of participation, even in a passive sense, is it any wonder that a common response to my effort to solicit opinions on the 18th Party Congress was a more polite version of a famous line by an earlier Democratic President: It's the economy, stupid? For ordinary folks like us, more than a few of the Shanghai residents I queried told me, it doesn't matter which Communist Party leader is in charge, just that I keep being able to make a living.

The Chinese Communist Party's top brass may not think there's any problem with a lack of popular interest in how Xi may differ from Hu. They could even interpret this as a sort of unspoken vote of confidence in their self-proclaimed skill at keeping China on a steady and appropriate course. It's also possible — and I sometimes sensed undercurrents of this in my conversations — that the lack of preferences is rooted in a very different conviction about people who rise to the top these days in the Chinese system. Namely, a feeling that there’s no point in picking favorites, since all are equally prone to be corrupt and to take pains to ensure that their family members benefit as much as possible from having a relative in a high position.