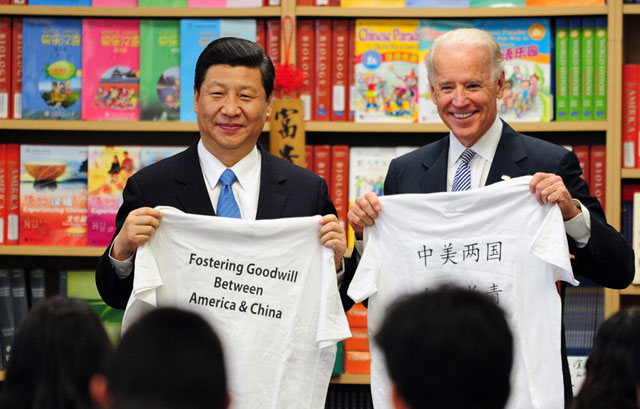 U.S. Vice President Joe Biden and Xi Jinping (then-Vice President of China) display shirts with a message given to them by students at the International Studies Learning School in Southgate, outside of Los Angeles, on Feb. 17, 2012. (Frederic J. Brown/AFP/Getty Images)

The United States and China will hold their fourth Consultation on People-to-People Exchange (CPE) in Washington, DC on November 21, 2013. CPE is a gathering of high-level officials and members of civil society to bolster both diplomacy and soft power in an effort to strengthen U.S.-China relations.

At the 2010 inaugural session, then-Secretary of State Hillary Clinton said, "[The U.S.-China relationship] must extend beyond the halls of governments to our homes, businesses, and schools. We need Chinese and Americans of all ages, professions and walks of life to get to know one another, to understand each other better, to connect and collaborate."

We often think relationships between countries are handled by politicians in high office. But in fact, they have always been personal and individual. In a sense, official diplomacy arose as a service to individual citizens' need for better contact and engagement. Today, with technological advances that connect people and ideas at lightning speed, ordinary people-to-people connections can and should play an ever more instrumental role.

China's Vice Premier Liu Yandong, chairperson of the U.S.-China Consultation on People-to-People Exchange, first visited the U.S. in her late 30s; China's current president Xi Jinping first visited the U.S. in his early 30s. I dare say that today we benefit from their earlier exposure three decades ago. By the same token, we must ensure that today's students in both the U.S. and China establish meaningful connections with a vigor proportional to the shared opportunities and challenges facing them in the decades to come.

Vice Premier Liu said at the 2011 National Chinese Language Conference that people-to-people exchange is "heart-to-heart communication, which plays an irreplaceable role for people in achieving mutual respect, deepening understanding and enhancing friendship. It can develop warm and lasting sentiments between the people, help people rationally view differences, and build a solid basis of trust."

A principal whose school in Los Angeles hosted Vice President Joe Biden and then-Chinese Vice President Xi Jinping in 2012 recently retold this story to me: Unsatisfied with how far the American Vice President was instructed to stand as he waited for his Chinese guest's arrival, Biden insisted that he stand where he could greet Mr. Xi immediately upon arrival. Biden may only know a little Chinese, but he certainly is a master at making people feel respected and welcome, protocol aside, which is the underpinning of any productive relationship.

It is true that more Chinese and Americans than ever before are visiting each other and interacting with one another through official and citizen exchanges. There's no shortage of dialogues, conferences, and summits between the two countries — from the most prominent Strategic and Economic Dialogue on security and development, to myriad others ranging from cyber security to food safety and education. Anyone who participates in these dialogues will understand that soon, each side begins to talk off-script.

Indeed, a pioneer of U.S.-China relations in the 20th century, Henry Kissinger, reflected that officials "tend to concentrate on the day-to-day issues that are before them at the moment. What needs to be done as a next step is to try to discuss a vision of the future that we would like to bring about, both China and the United States." He continued, "And if we then think of common projects that can be done jointly so that there is an experience of working together, not only in the abstract, but on a series of concrete issues that are before us."

Similarly, commenting on the "Chinese Dream," Ambassador to the United States Cui Tiankai remarked that "in different places and different times, people may have different dreams, but the essence they're all the same — aspirations for better life, better world, and better future."

In this spirit of "dream without borders," I invite you to tell us: What do you do to nurture a next generation of able leaders of, and participants in, a dynamic U.S.-China relationship?