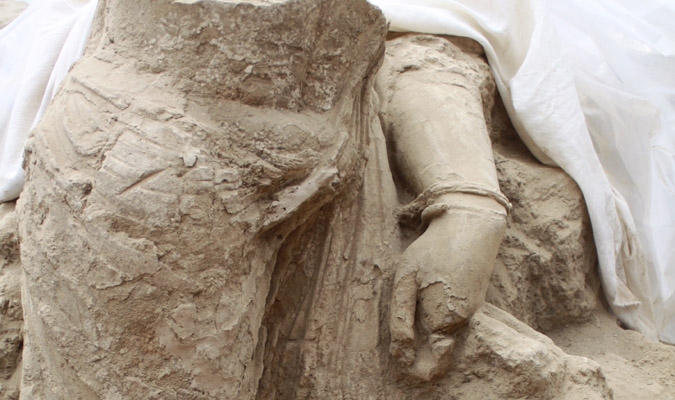 This past November, major news sites as well as Asia Society reported that Mes Aynak, an archeological site dating from between the 4th through 7th century recently discovered in Afghanistan's Logar Province, was under imminent threat.

Chinese mining company China Metallurgical Group Corporation (MCC) had bought the mine for $3 billion and planned to mine its vast quantities of copper ore deposits. The mining process would have destroyed the rich historical site which contained numerous statues of the Buddha, frescos, and domed reliquaries known as stupas.

On December 7, 2010 it was announced that the "Mes Aynak Cooperation Agreement" was signed by Afghanistan's Minister of Mines, Wahidullah Shahrani, and Deputy Minister of Information, Culture and Youth, Dr. Sayeed Makdoom Raheem. The agreement gives archaeologists an additional three years to secure all objects of historical importance from the mine.

The meeting between the Afghan ministers was also attended by MCC President/Chairman Zou Jianhui, who attended to show his support for Afghanistan's cultural heritage, a cause that his company has deferred to by cooperating in the extension of the archaeological dig.

American and Chinese embassy representatives as well as French archeological group DAFA and UNESCO attended the signing. The American embassy and military forces have pledged their support in helping care for the objects.

According to the Afghan Voice Agency (AVA), the agreement "will be in force until till all the artifacts have been safely removed from Aynak and preserved properly and those which could not be moved have been protected in situ."

It remains to be seen, however, how flexible the timeline is, given that MCC's is the largest foreign investment in the country. Afghan Voice Agency has also reported that estimated revenue of the mined copper is somewhere close to $300 million a year and over time, with the mine ultimately contributing approximately $1.2 billion to Afghanistan's economy.

For now, however, with the concomitant support of Afghanistan's economic and cultural ministries as well as an understanding with their Chinese foreign partner achieved, Mes Aynak's trove of Buddhist relics have a greater chance at surviving.