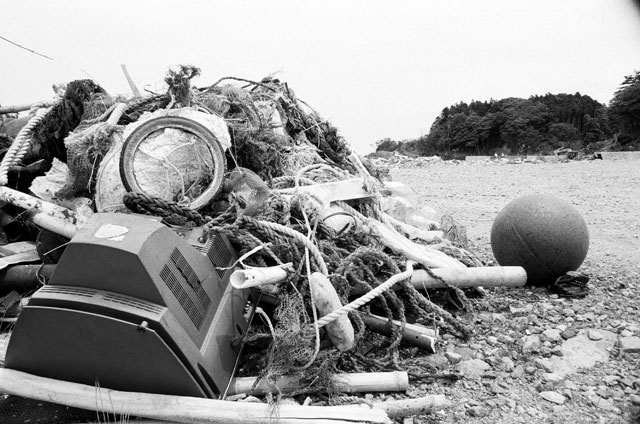 Minamisanriku-cho, Tohoku, Japan, during the summer of 2012. (Andrew Littlejohn / www.andrewlewislittlejohn.com)

At a performance at Asia Society in New York over the weekend, jazz artist Takuya Kuroda ended the evening with a wistful song entitled "Sometime, Somewhere, Somehow," which he composed two years ago. "When it gets to be this time of year," Kuroda explained, "my thoughts go back to the time of the disaster." For many Japanese, thoughts of cherry blossoms hover in the air when mid-March arrives — but they are also likely to remember the terrible earthquake and tsunami that occurred on March 11, 2011.

Despite outpourings of international aid and relief, three years later the outlook on the ground remains worrisome. Nuclear contamination continues, communities lie abandoned, and individuals struggle to rebuild their lives. Minamisanriku, a town particularly hard hit by the tsunami, has been eerily transformed into perfectly leveled ground, a tabula rasa, flat, devoid of life. Even the remnants of the buildings have been leveled by bulldozers. The town is virtually forgotten. "Not even a ghost town, it's a total vacuum where the population of ten thousand or more lived since 1600s," says Shun Kanda, an architecture professor at MIT who has been heavily involved with reconstruction efforts through the MIT Japan 3.11 Initiative.

In Kanda's opinion, recovery and rebuilding aren't just about finding shelter and relief; they're about aligning form and function with unique lifestyle patterns, local necessities, and regional ecological issues. As he puts it, "[In general] disaster reconstruction is unavoidably and initially focused on the immediate [and] most urgent. What is most difficult to get across to 'decision-makers' is that building for the next generation has to be undertaken now, not at some point five years away. If we wait five years, who knows what or who will be left."

This is particularly true in Japan's northeast. Even before the tsunami hit, the region was faltering. Many young folks fled to the city, leaving parents and grandparents behind to continue their work alone. Now, in places like Minamisanriku, the regional population is down by 30%, and 40% of that elderly. With limited manpower and a weakened economy, the road to recovery is far from straight.

Kanda stresses that international assistance is still needed. But it's not a question of money. It's a question of ideas and inspiration.

"Collaboration, brainstorming, and support are important to the region's revival vis-a-vis ecological issues, long-range community building .... The people of Japan's northeast are known for silent strength and resilient individualism. In the past three years we have witnessed a union of these strong, proud individuals coming together. My hope lies with putting this strength to use for building the future."