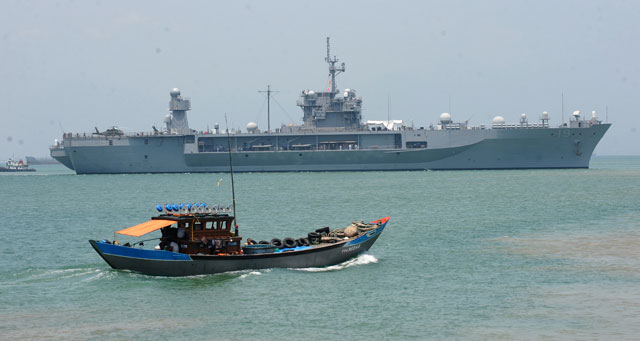 A Chinese patrol vessel's attack on a Vietnamese fishing boat last week is just the latest incident demonstrating Asia's urgent need to act swiftly, together with the United States, to develop a mechanism for managing territorial disputes in the South and East China Seas. Neither side can afford to let Asia — a driving force of the global economy — be derailed by an escalation of the maritime conflict.

Avoiding an adverse outcome will depend on claimant states' willingness to place a high priority on strategic cooperation — including on energy exploration, fishing rights, and the maintenance of open sea-lanes. The Association of Southeast Asian Nations — which seeks to unite Southeast Asian governments and key external partners, including China, along economic lines — should be allowed to facilitate the dialogue that is needed. After last year's ASEAN meeting in Phnom Penh, Cambodia, where efforts to issue a joint communiqué reached an impasse, Asia's leaders must demonstrate a renewed determination to achieve effective regional cooperation.

But domestic politics is impeding progress, with leaders manipulating nationalist sentiment to distract attention from economic and political uncertainty. As countries hedge U.S. support by cultivating China and other ASEAN members, they might be tempted to exclude some of their neighbors by committing to bilateral agreements behind closed doors.

In fact, this caution is not entirely unfounded. America's failure to ratify the United Nations Convention on the Law of the Sea (UNCLOS) — the preeminent international legal mechanism for resolving maritime disputes — is undermining its credibility as a mediator in the South and East China Sea conflicts.

The Chinese position is similarly opaque. On the one hand, China argues that its sovereignty and territorial integrity is a core national interest, essential to its stability, and continues to insist that its nine-dash line map, created in the late 1940s, delineates its rightful territory — including roughly 80% of the South China Sea.

On the other hand, China claims to be concerned with maintaining the status quo. Indeed, according to Major General Zhu Chenghu, Dean of China's Defense Affairs Academy, some in China are content to set the maritime disputes aside, in order to focus on Asian economic interests. If so, China should do more to advance discussion on economic cooperation with its Southeast Asian neighbors.

Given that the U.S. and China are the most influential actors in Asia, and that the most pressing challenges facing their bilateral relationship concern security, more effective communication between their militaries is needed. Otherwise, given mutual distrust, a minor incident could easily be misconstrued — with disastrous consequences for Asia and the global economy.

The U.S. remains unconvinced by China's claims that it will pursue peaceful development. At the same time, many Chinese leaders view America's policy in Asia as one of encirclement, designed to impede China's economic and political rise. While this interpretation may be extreme, China's suspicions have some merit, given America's mutual defense treaties with the Philippines and Japan. It remains unclear at what point in an altercation between one of these countries and China the U.S. would intervene militarily.

The very different approaches to diplomacy taken by Asia and the West exacerbate this distrust. Indeed, the Western approach does not always mesh with Asian sensibilities — even when pursued by an Asian country.

For example, while the Philippines was within its rights, according to UNCLOS, to internationalize its dispute with China over maritime jurisdiction within the West Philippine Sea (its name for the South China Sea), the benefits of calling for multilateral arbitration remain doubtful. As Zhu pointed out, bilateral talks would have been preferable.

Indeed, the Philippines’ move seems to have blindsided its ASEAN peers, which quickly distanced themselves from it. Singapore’s government called it "a national decision" — a response that is consistent with Singapore's official position that the territorial disputes should be settled by the parties directly concerned.

A fractured ASEAN will not benefit anyone. To be sure, there have been examples of bilateral resolution of competing territorial claims. For example, Malaysia and Vietnam agreed to issue a joint claim over a disputed area of the South China Sea. But success depends on mutual willingness to find a solution, and many of the ongoing disputes involve several claims. A united ASEAN can serve as a forum for effective cooperation.

As Asia rises, it faces a dilemma: whether to abide by Western diplomatic norms, or to respect Asian values, such as consensus, harmony, and good neighborliness — values set forth in the ASEAN Declaration on the Conduct of Parties in the South China Sea. To resolve territorial disputes, a balance must be struck between these competing approaches. Given Asia's global economic role, the rest of the world has a strong interest in supporting such a resolution.