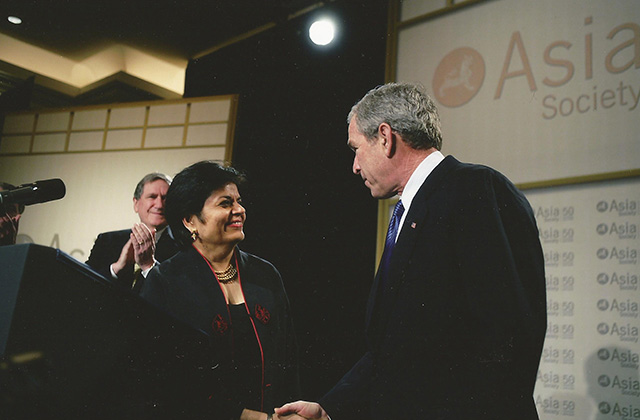 On February 22, 2006, U.S. President George W. Bush gave an address at Asia Society in Washington, D.C. and celebrated the organization’s 50th anniversary. With the ambassadors from India and Pakistan present, he used the occasion to speak about relations between the three countries.

“Fifty years ago, most of Asia was mired in hopeless poverty,” Bush said in his remarks. “Today its economies are engines of prosperity. These changes have been dramatic, and as the Asian continent grows in freedom and opportunity, it will be a source of peace and stability and prosperity for all the world. The transformation of Asia is beginning to improve the lives of citizens in India and Pakistan, and the United States welcomes this development.”

In the above photo, Bush is seen meeting then-Asia Society President Vishakha Desai as then-Chairman Richard C. Holbrooke looks on.