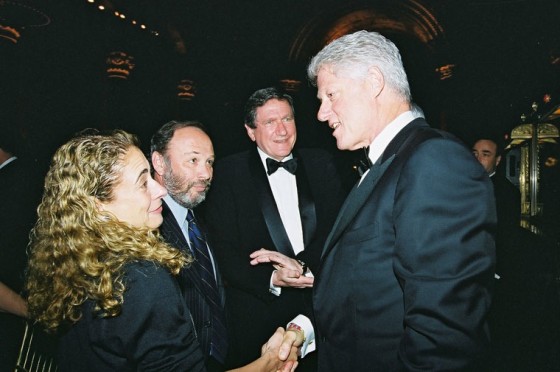 On May 12, 2003, former U.S. President William Jefferson Clinton gave an address at Asia Society's annual dinner in New York City, where Elisabeth Rosenthal of the The New York Times was awarded the inaugural Osborn Elliott Prize for Excellence in Journalism on Asia for her pioneering coverage of the spread of HIV in rural China.

"No region matters more to our hopes for the future than Asia," Clinton said in his remarks. "So many of the world’s people live there. So many fates and cultures meet. So much of the innovation, the upheaval, the change is occurring there. Asia may well yet hold the key to the outcome of the twenty-first century’s struggle between the forces of integration and those of disintegration."

In the above photo, Clinton is seen with Elisabeth Rosenthal, Joe Klein, and then Asia Society Chairman Richard C. Holbrooke.

The 2015 Osborn Elliott Prize for Excellence in Journalism on Asia will be presented on June 3 in New York City.