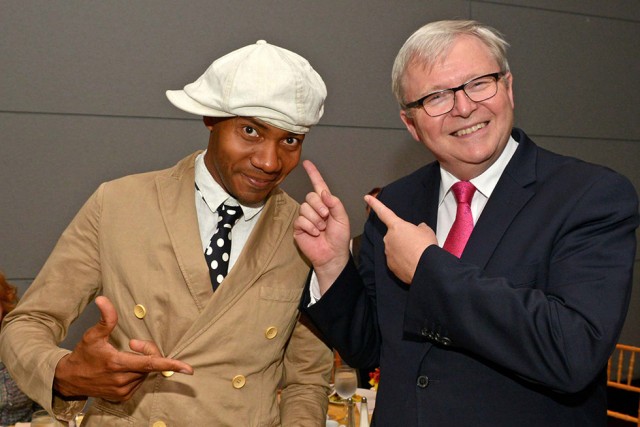 In September 2014, Asia Society in New York kicked off its exhibition Nam June Paik: Becoming Robot, which was dedicated to the late Korean-American artist Nam June Paik's progressive art that explored the relationship between technology and the body, as well as the intersection of technology and culture. For the opening of the exhibition, Asia Society commissioned a performance called "Paik Variations I-III" with American electronic and experimental hip hop musician DJ Spooky (a big fan of Paik's). In the above photo from the opening festivities, DJ Spooky meets former Australian Prime Minister Kevin Rudd, who was set to become the Asia Society Policy Institute's president the following February. In the below video, see clips from DJ Spooky's "Paik Variations I-III" performance.

Each week for "Throwback Thursday" (#TBT), we'll reach into our archives to find a photo from the organization's 60-year history. Some photos will feature important moments, some will feature important people, and others still will just be photos we love. Do you have an Asia Society photo you'd like us to consider including in this series? Please email the photo and any related details to photos@theasiablog.org (we regret that we won't be able to respond directly to each inquiry).