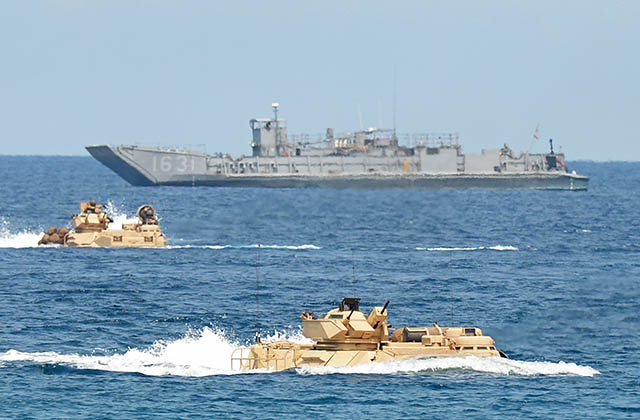 U.S. Marines amphibious assault vehicles speed past a landing ship during an amphibious landing exercise on April 21, 2015 as part of annual Philippine-U.S. joint maneuvers some 137 miles east of the Scarborough Shoal in the South China Sea — an area contested by China and the Philippines. (Ted Aljibe/AFP/Getty Images)

China suffered a major rebuke on Tuesday when an international tribunal in The Hague declared much of Beijing's territorial claims in the South China Sea to have no basis in international law. The decision was the result of an arbitration case brought by the Philippines in 2013 to settle disputes based on the United Nations Convention on the Law of the Sea (UNCLOS), to which both countries are signatories.

The Chinese government has dismissed the proceedings as “illegitimate” from the beginning, and for the past several weeks had engaged in a media campaign to preemptively discredit the ruling. High-level Chinese officials called the tribunal everything from a “farce” to “nothing but a scrap of paper,” and have stated in no uncertain terms that China will not abide by it.

Online, Chinese citizens have reacted with such fury that internet censors have even had to tamp down calls for war. But until recently, it appeared that the Chinese public was mostly on board with submitting to exactly this type of arbitration.

According to a survey taken in April of 2013 — three months after the Philippines initiated its case — 62 percent of Chinese respondents supported submitting South China Sea disputes for U.N. arbitration, while only 23 percent opposed the idea. The survey, published the following year by the University of Western Australia’s Perth USAsia Centre, sampled more than 1,400 in-person respondents in five major Chinese cities, with the aim of gauging Chinese public opinion on various aspects related to East and South China Sea disputes.

It wasn't the only study with this finding. Professors Jessica Chen Weiss from Cornell University and Allan Dafoe from Yale surveyed more than 2,000 respondents online from across China between October 2015 and March 2016 on international disputes. According to Weiss, the still-unpublished results found that 60 percent supported international arbitration and 19 percent opposed, with 21 percent remaining neutral.

Public opinion polling is notoriously difficult in China, with its vast, diverse population, challenging geography, and often-uninviting political atmosphere. Surveys are often geographically and ethnically unrepresentative, biased toward urban residents, and yield responses that err on the side of political correctness. However, these survey results ran counter to the government line.

The Chinese government's opposition to international arbitration of territorial disputes pre-dates both of these surveys — though this stance was not yet widely disseminated in the media until very recently. Rather than submitting to a policy that concerns the sea as a whole, Beijing instead advocates direct bilateral negotiations with individual rival claimants, such as the Philippines and Vietnam. Respondents in the 2013 survey were comparatively less amenable to “compromise through negotiation” of this sort, with 57 percent supporting it and 35 percent opposing.

So why did much of the Chinese public seem to support arbitration that would ultimately go against their country? One key factor may be that they overwhelmingly believed in the correctness of China’s positions. In the 2013 survey, when asked to rate their certainty on China’s territorial stances, respondents averaged over 91 percent confidence in all of China’s claims within the controversial “nine-dash line” that stretches deep into the South China Sea just short of the Vietnamese, Philippine, Bruneian, and Malaysian coasts. There was 92 percent confidence regarding the island chains specifically disputed by the Philippines, meaning this week’s decision may have surprised many in China. The Cornell/Yale survey found that indeed about 60 percent of respondents expected a total or partial victory in a hypothetical arbitration ruling, 20 percent expected an even compromise, and 20 percent expected a partial or total loss.

Andrew Chubb, a Ph.D candidate in international relations at the University of Western Australia who conducted the 2013 study, says that public support for arbitration can probably be read as conditional on two things: China initiating or agreeing to it, and the prospect of China winning. However, he noted, while the average confidence in China’s claims averaged about 91 percent, only about 50 to 55 percent of respondents indicated complete 100 percent certainty. “So that could be read, optimistically, as a sign of potential willingness to accept some concessions in the verdict, though not much,” Chubb said via email.

China claims “historic rights” to the contested waters based on an ancient presence. Asserting sovereignty over such claims is a key part of China’s “Patriotic Education” taught to schoolchildren and reinforced through media, museums, and entertainment, which tends to frame territorial disputes as remnants of historical “humiliation” at the hands of foreign aggressors. Since coming to power in late 2012, Chinese President Xi Jinping has embraced this narrative and made it a cornerstone of his signature “Chinese Dream” slogan — which emphasizes a Communist Party-led “great rejuvenation” of China from the ashes of a foreign-inflicted “Century of Humiliation” (1840-1949).

In the weeks prior to the decision, and especially after, government officials and state media cast it as part of an ongoing Western conspiracy to thwart China’s rise. “The case, from the very beginning, is a trap set by the U.S. to maintain its dominance in the Asia-Pacific region,” read an editorial in the Communist Party mouthpiece People’s Daily. “The days have long passed when the country was seen as the ‘sick man of East Asia,’ whose fate was at the mercy of a few Western powers,” said a separate article in the state-owned China Daily.

It's not yet clear what Chinese public opinion of international arbitration is today — now that China has lost an actual case and the process has been thoroughly condemned in domestic media and framed as another example of Western-led humiliation.

“The bottom line is that, while most of the public seems to think [arbitration] is a reasonable method of handling the issue, opinion was always going to be heavily contingent on the position the government took,” Chubb said. “The flipside to that is, if the [Communist Party] decided it wanted to pursue such a path of submitting to arbitration, and focused its powers of propaganda on promoting that position, it would probably be able to convince most citizens to go along with it. But that ‘if’ is currently inconceivable.”