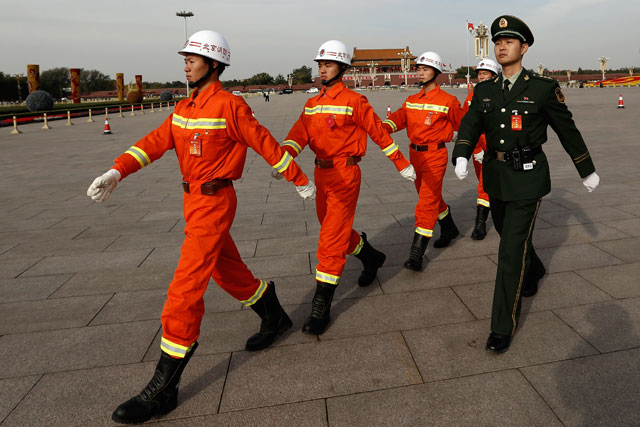 Chinese paramilitary policemen parade in front of Tiananmen Square on Nov. 7, 2012 in Beijing. The 18th National Congress of the Communist Party of China (CPC) convenes in Beijing on Nov. 8. (Lintao Zhang/Getty Images)

As the world reacts to the re-election yesterday of U.S. President Barack Obama, Beijing begins the process of its own leadership transition tomorrow. In the weeks leading to Thursday's opening of the 18th Party Congress, a wide number of reports have come in from reporters and Weibo users of strange things that have been banned by Chinese authorities, much to average citizens' annoyance.

While some of these restrictions don't make much sense at first glance, a certain paranoid logic is discernible in the government's policies — even in the case of the prohibition of trained pigeons. Herewith, a list of some of the most noteworthy bans:

An amateur live performance of To Kill A Mockingbird: This play based on the Harper Lee classic that was first performed at Asia Society Hong Kong in October was scheduled to travel to Beijing, but was abruptly canceled by the Ministry of Culture, citing an inability to obtain a permit in time. Since the performance troupe had notified authorities five months ahead of their scheduled trip from Alabama to China, experts agreed that the Ministry of Culture was abruptly halting all foreign performances due to anxiety surrounding the impending Congress. Nicholas Platt, president emeritus of the Asia Society, told the South China Morning Post, "Everything is on hold right now. No one wants to make a mistake."

Toy airplanes, trained pigeons, and balloons: Reports have come in that all toy airplanes have been taken off the shelves and that owners of trained pigeons have been instructed to not allow them to fly. The government-controlled Global Times reports that officially, only an ID is required to purchase flying toys, but admits that some store owners have opted to simply take them off the shelves. While seemingly unrelated, any airborne device could be used by activists to spread political messages. Reuters notes that this method was employed in the 1990s in southern China, when messages were tied to pigeons' feet.

Open taxi windows: Users of Weibo have posted pictures and accounts to show that Beijing taxi drivers have been instructed to keep all back windows locked and to remove the handles on taxis with manually-opening windows, likely to prevent people from dropping politically sensitive materials into the street. Taxi drivers have also reportedly been instructed to be on the lookout for passengers carrying any ball-type object, mainly out of fear that ping-pong balls bearing reactionary messages will be distributed. A photo of a handout outlining these instructions to taxi drivers that popped up on Weibo hasn't been officially verified, but other user accounts have shown pictures of the window handles removed and stated that taxi drivers have confirmed receiving these instructions.

Knives: The city's ban on knife sales is logically the most decipherhable to the foreign reader, but netizens have shown how ridiculous they find it that no one in Beijing is able go to the store to pick up a kitchen knife at the moment. One mocking image featured on Ministry of Tofu is a fake poster that shows a rock being used to chop meat, while the "knife" radical is missing from one of the characters. As if that weren't enough, word now arrives that all blades, up to and including pencil sharpeners, have been banned.

Out-of-town fruit buyers: Time reports that Weibo users have cited a large drop in the price of persimmons because out-of-town drivers who usually purchase them aren't allowed to bring vans and trucks into Beijing. We have to hope those stocking up on fruit in the city already have knives to cut it.