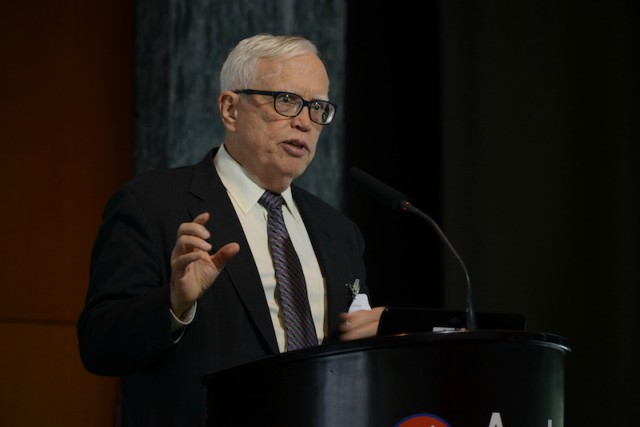 University of Chicago professor James Heckman speaks at the Forum on the Future of Education in Asia in Hong Kong on November 16, 2015. (Alex Leung/Asia Society))

What does it take to succeed in the 21st century?

It might not surprise you to hear that education is key. But what you may not expect to hear is this: social and emotional skills are more critical to success than the academic skills you learn in a traditional classroom.

This insight is from Dr. James Heckman, a professor at the University of Chicago and Nobel laureate in economic sciences and the keynote speaker at the Forum on the Future of Education in Asia. The event — which brought together leaders from education, business, and policy — was hosted by the Asia Society Center for Global Education.

In examining how to ensure that all students succeed—in a world in which inequality is growing in virtually every country—Heckman dismisses charity, or redistribution of wealth, as an effective solution. “There is a better way,” Heckman argued. “We can avoid poverty by giving children the skills that give them the right and ability participate in the larger society. We should be doing 'pre-distribution' rather than redistribution.”

The skills that matter most are often not emphasized by today’s education system and ignored by traditional tests such as the Programme for International Student Assessment (PISA) that OECD administers to 15-year-olds around the world. And while many people assume that most skills are developed as a result of inheritance, multiple studies show that investment is also a crucial factor. According to Heckman, “Genes play a role, but not the only role. What we used to think of as traits, which might be better understood as skills, can be created by investment.”

But what exactly are non-cognitive skills?

Sometimes called “soft” skills, character skills, or social and emotional skills, non-cognitive skills include traits like motivation, sociability, empathy, attention, self-esteem, and self-regulation. These skills have traditionally been undervalued, but there is hard evidence that they are more critical to a person’s success in life than almost anything else.

So how do we translate all of these studies demonstrating the importance of non-cognitive skills into education practice?

According to Heckman, mentoring, family engagement, and personalized education are critical because skill formation is dynamic — in other words, skills beget skills. Therefore, it’s important to promote policies that help develop non-cognitive skills. This begins with early childhood education and interventions, but it continues throughout a child’s education into adulthood, with work-based apprenticeship programs that build attachment, interaction, and trust.

“We need a much more comprehensive notion of what education means today — the key is attachment, engagement, and a deeper understanding of mentoring and learning. It also means when we measure education, we have to go beyond academic measures and measure non-cognitive skills. Start early, go broadly, and go far beyond school,” Heckman said.

Asia Society's Center for Global Education (CGE) brings together leaders and institutions from around the world to tackle one of the most critical education challenges today: how to educate all students for employability and citizenship in a global era.

In today’s interconnected world, the ability to appreciate diverse cultures, analyze complex international issues, and understand foreign languages is essential. A future of peace and prosperity depends on ensuring a high-quality 21st century education for the next generation.

Watch the complete Future of Education in Asia program

Anne Hilton is the assistant director of digital strategy at Asia Society's Center for Global Education.