'Singaporean Fairytale' Fertility Website Not So Magical for Some Critics 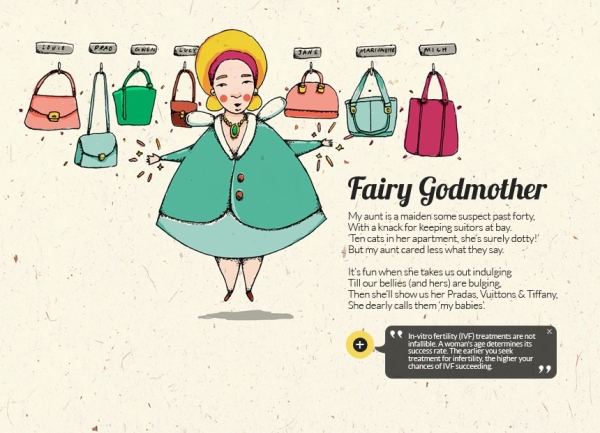 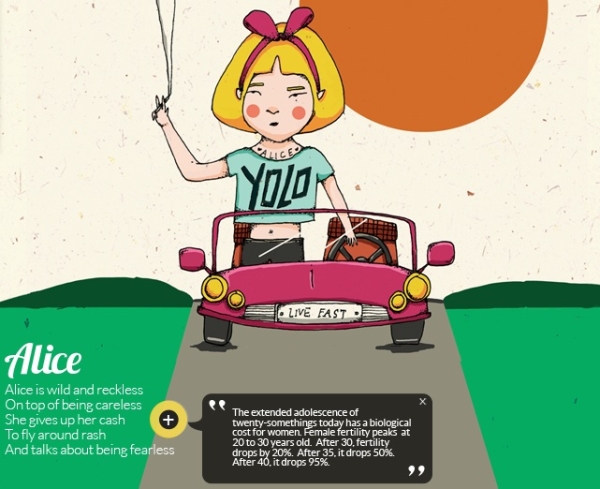 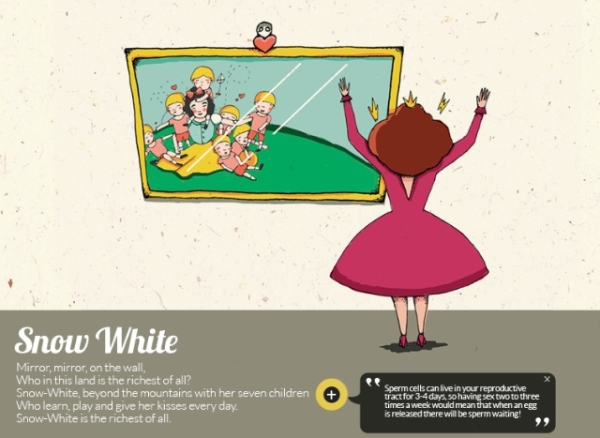 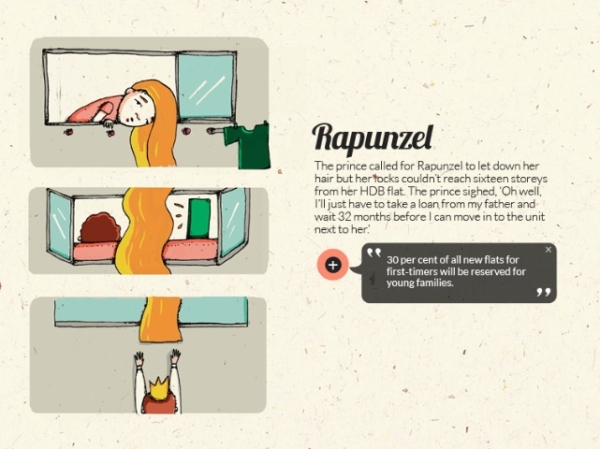 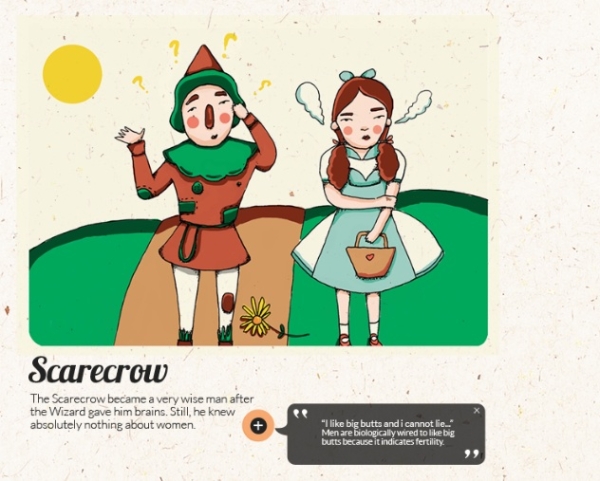 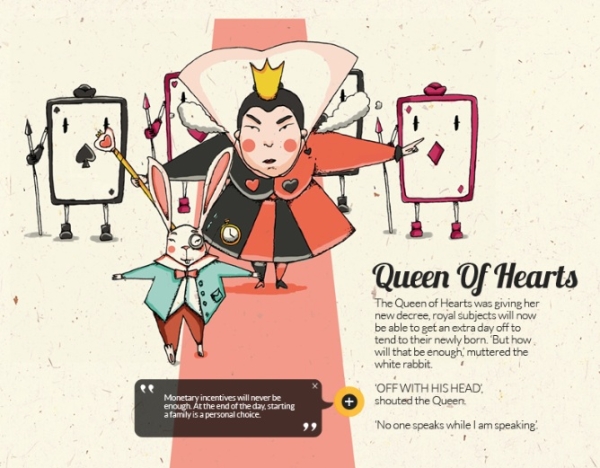 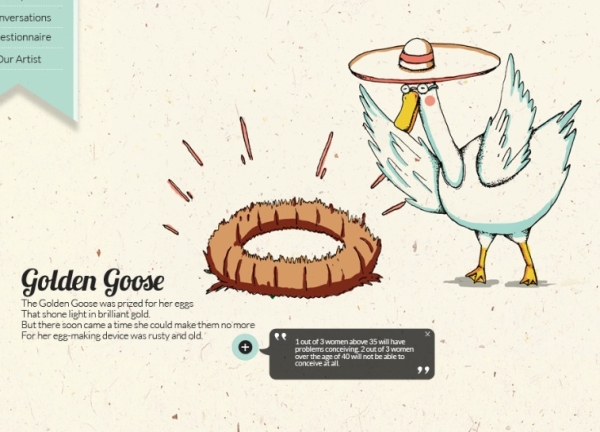 "You can have it all, if you only choose to," asserts a newly-launched website entitled The Singaporean Fairytale, which has sparked controversy for its use of illustrated rewritten classic fairy tales to encourage Singaporeans to carry out what its creators believe is a national duty: to have many children, and have them now.

"My aunt is a maiden some suspect past forty, with a knack for keeping suitors at bay. 'Ten cats in her apartment, she's surely dotty!' But my aunt cared less what they say," one rhyme ominously states, as a warning to twenty-somethings about what could become of them if they don't focus on settling down and starting a family early.

The site, created by four undergraduate students with a grant from an organization called the National Family Council, supports the Singaporean government's campaign to increase the birthrate among its citizens. Additional "fairy tales" contain messages that discourage young Singaporeans from waiting too long to marry and conceive a child at the risk of the ticking "biological clock," which they say should be a concern for both women and men. It also features a Q&A with a doctor who argues against waiting until one's 30s to have a child, a "fertility test" and a fact sheet about causes of infertility in both women and men that warns against activities such as smoking, drinking, and eating animal parts associated with traditional Chinese medicine intended to increase virility.

Singapore's government is currently spending about $1.3 billion annually on a campaign to increase Singapore's total fertility rate (TFR), which currently stands at 1.2 children born per woman, one of the lowest in the world. The government hopes its recent efforts will push the rate up to 1.4. Recently-enacted policies have included the introduction of one week of paternity leave for straight, married couples (as opposed to 16 paid weeks of maternity leave) and funding for assisted reproduction.

The government's tangible economic benefits have been accompanied by a strong ideological campaign to convince people that marriage and children are a national imperative, which the creators of Fairytale hope to aid. For the city's more romantically challenged, a state agency called the Social Development Unit (SDU) has dedicated itself to encouraging marriage in Singaporean society through organizing speed-dating events and publishing a "flirting guide." These efforts have been the subject of mockery and criticism for focusing on propaganda rather than helping with the real-life challenges of having a child in Singapore.

"It's an old-fashioned way of trying to solve this problem," said Corinna Lim of Singapore's Association of Women for Action and Research in a recent Guardian article. "It's going backwards when going forwards would be what Scandinavian countries are doing — making it easier for women to have babies and allowing men to take part [through paternity schemes], instead of pressuring women by saying they're not married yet." According to Kirsten Han at Asia Sentinel, "Demographers have long known that no one is going to have a baby just as a favor to their country. All that can be done is to remove the obstacles in the way of those who do, and respect the decision of those who don't."

Fairytale, however, takes a firm stance that those who want to conceive shouldn't blame career or financial pressures for not doing so. One cartoon features the "Queen of Hearts," who appears to be a metaphor for the Singapore government when she decrees, "Royal subjects will now be able to get an extra day off to tend to their newly born." When the "White Rabbit" argues it's not enough, the queen shouts "Off with his head!" The moral of the story defends the "queen" by stating, "Monetary incentives will never be enough. At the end of the day, starting a family is a personal choice."

Another particularly morbid story features Humpty Dumpty's drunk widow complaining that he committed suicide because of an 80-hour work week, which is a reference to the fact that Singapore has the longest average number of work hours in the world. However, the creators give the wife no sympathy; rather, the story features her comically auto-combusting into pieces.

Several blogs have also harshly criticized the website for putting excessive pressure on women to have a child before it's too late. One "Golden Goose" analogy states that although the Golden Goose was "prized for her eggs," her "egg-making device" became "rusty and old." Singapore blogger Fikri Alkhatib writes that this wording places "value judgment on the various stages of a woman's life," and implies "that her worth is contingent upon such." In 2011, former Prime Minister Lee Kuan Yew received similar criticism after he publicly asked a female PhD student if she had a boyfriend and lectured her about the biological clock.

"Aside from being grossly condescending, these stories ignore the myriad valid reasons for young women to delay marriage and children," argues Jennifer Lai at Slate. "While it is important that women are educated about fertility since the best decisions made are ones that are informed, doing so through fairytales and nursery rhymes is pretty patronizing," states Tracie Egan Morrissey on Jezebel.

Alkhatib sums up the main criticisms of the site's ideology quite succinctly. "Singaporeans aren't just 'choosing' to not 'have it all.' That's pretty extraordinarily insulting. They either cannot, or they simply reject the idea of your 'all.'"