Shanghai, Bo Xilai and 5 China Noirs You Should Read this Summer

As my son and daughter will be the first to tell you, I’m a bit obsessed with Shanghai.  When they were teenagers, they’d tease me about my proclivity for bringing the city into dinner conversations that had nothing to do with Shanghai — at least on the surface. Say the Beatles were the focus of discussion, I’d slip in the fact that George Harrison wrote the theme song for Shanghai Surprise, a film starring Madonna and Sean Penn that’s excruciatingly bad.  If computer games came up, I’d point out that “Shanghai” was the name of an online version of mahjong.  And so on.

They’d doubtless be surprised to learn, therefore, that "Motives and Motifs in the Curious Case of Bo Xilai," a piece I recently did for the Los Angeles Review of Books, does not contain a single reference to Shanghai.  What makes this omission particularly notable is that my story focuses on how allusions to noir books and films have featured in commentaries on the recently purged Bo Xilai and his wife Gu Kailai.  And no other Chinese city is as tightly linked to the noir as Shanghai.  Consider these basic facts:

So why, in light of all this, didn’t Shanghai get even a cursory look-in in “Motifs and Motives and the Curious Case of Bo Xilai”?  The reason is simple.  The city has played a crucial role in the careers of many powerful and controversial Chinese men and women, but not in those of either Bo or Gu (for more Asia Society coverage of Bo Xilai's downfall and the murder of British businessman Neil Heywood, click here).  Cities mentioned more often than Shanghai in accounts of this fallen power couple include Dalian (Bo held his first major post there), Singapore (a place Gu visited often to make deals), and Chongqing (where Bo was Party Secretary and where Heywood spent his final hours).

Feeling a bit funny about giving Shanghai such short shrift in “Motive and Motifs,” my first publication on noir, I decided to write this companion piece, which I will now bring to a close by pointing readers to five books in the genre, loosely defined to includes thrillers and true crime tales as well as whodunits, that seem particularly worth tackling while Bo and Gu remain in the news.  Shanghai won’t be the only city dealt with below, but this time it will get its due. Here, then, in no particular order, is my rundown of five notable works on noir that are set in China: 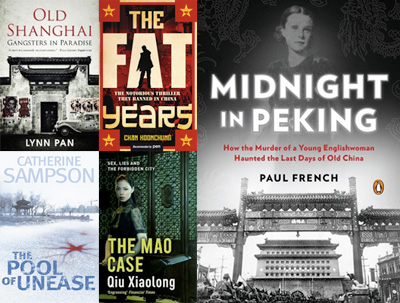 The Mao Case
by Qiu Xiaolong

This Inspector Chen mystery is not my favorite work by Qiu, since it has some of the plot devices that struck me initially at least as a bit too far-fetched.  Still, it is a particularly fitting one to read — or re-read — in 2012, given the role that secrets in the upper echelons of the Communist Party play in it and its meditation on the varied uses to which memories of and symbols associated with the Mao era can be put in contemporary China.  And while the story continues to strike me as containing over-the-top elements, they do not seem quite as outlandish now as they did when I read the book around the time of its initial publication.

This work which came out in the 1980s and has recently been re-issued, is a non-fiction publication written with a novelist’s grace.  It tells the story of the notorious Green Gang, which gives it special interest in light of Bo gaining fame in part through a high-profile crackdown on organized crime.  Revelations that participants in that crackdown may have behaved thuggishly themselves won’t seem shocking to readers of Pan’s book, since in the 1930s one of the gangsters she discusses, Big-Eared Du (Du Yuesheng), was both a leading figure in the opium trade and a member of officially constituted groups in charge of suppressing the sale of illegal drugs.

The Pool of Unease
by Catherine Sampson

One subplot in this gripping detective story by a former journalist living in Beijing, involves a Briton who meets a violent death in China.

Midnight in Peking
by Paul French

French, a longtime Shanghai resident whose previous publications include a history of foreign correspondents in China, offers a compulsively readable true crime work in the tradition of Devil in the White City.  Like Pool of Unease, it deals with a foreigner’s death — in this case a young woman whose was murdered in a particularly horrific way and whose killers were never brought to justice. (Click here to read Asia Blog's review of Midnight in Peking.)

The Fat Years
by Chan Koongchung

This book tends to be approached as a work of dystopian science fiction rather than noir, and it certainly owes a clear debt to such classics of that genre as 1984 and Brave New World.  It is, however, filled with moody scenes and settings.  And like many works of noir, it includes an effort to unravel a mystery — in this case, why almost no one living in China in 2013 seems to remember anything about the events of a month in the recent past. Central to its plot are many issues that figure in Bo’s case, including the Communist Party elites obsessive concern with maintaining control and projecting an air of total unity.