Scorecard: What Was Predicted for Asia's 2013 — and What Actually Happened | Asia Society Skip to main content

Scorecard: What Was Predicted for Asia's 2013 — and What Actually Happened 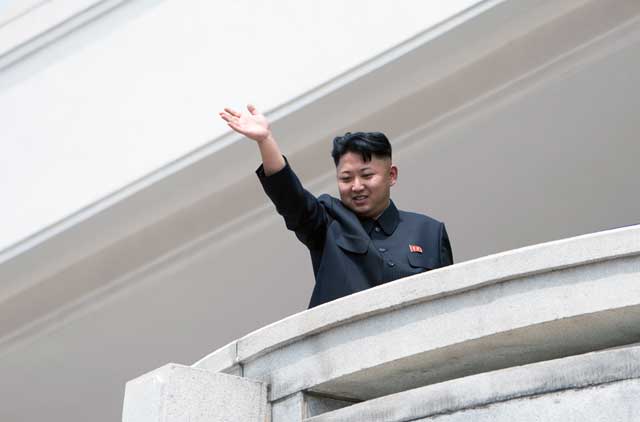 North Korean leader Kim Jong Un, shown here reviewing a military parade in Pyongyang on July 27, could be waving goodbye to hopes from the international community that he would "behave better" in 2013. (Ed Jones/AFP/Getty Images)

One year ago, marking my first December at the Asia Society, I decided to try an Asia-centric version of an old habit — predictions for a new year of global events. It was a common pastime in journalism, where I'd spent nearly 30 years, and it was invariably an interesting and humbling exercise. As I said last year, "I am not a journalist anymore…but you don't lose the curiosity, of course, and I haven't lost the foolish notion that I have an idea of what another 12 months may bring."

So next week I'll take a stab at a new set of prognostications. For now, however, the humbling part. I made 13 predictions for 2013. They are reprinted below — with comments, and a scorecard.

1. Flareup over the islands. A Chinese maritime incursion brings emergency meetings between Japan and China, brokered by the U.S. All sides announce agreement on general principles in the contested waters, and say much about the notion that mutual interests must override any territorial disputes. (In other words, nothing much is resolved).

I give myself a 3/4 correct on this one; certainly we've had the flareups — multiple Chinese incursions, in fact, and China's recent declaration of a new "air defense zone" has ratcheted tensions higher still. Yes, we've had statements about mutual interest, and yes, it's true that "nothing much is resolved." In a way I was too optimistic, however; we've not had any "emergency meetings between Japan and China."

2. Flareup in the South China Sea. Some regional nation (Vietnam? The Philippines?) calls an emergency ASEAN meeting to protest Chinese aggression. Much talk of potential sanctions and "we must not stand for this" — again, with a U.S. role — and again, the issue is basically kicked down the road.

The year has seen less in the way of high drama, more in terms of subtle moves by ASEAN countries to counter China. No real emergency — but i was right in that there was plenty of worried talk from the ASEAN nations (as an Asia Society guest said this week, "there's not a country in the region that isn't running to the U.S. for security reasons"), and it's also true that the issue has been "kicked down the road" once more. 1/2 point here.

3. Asian markets do their usual thing — but for a different reason. Good news from the U.S. — we don't go off the fiscal cliff, the job market improves, and consumer confidence along with it — helps spur global demand and leads to better-than-expected performances on the major Asian markets.

The "good news" from the U.S. proved correct — and at least in part it helped boost Asian markets. Another 3/4 point.

4. Kim behaves better. Having burnished his credentials at home with a successful rocket launch, Kim Jong Un sets out on the road to at least small reforms in North Korea, allowing more business ventures and outside visits. The bellicose rant-and-rave rhetoric mellows, too.

Not even close. Take your pick — the recent execution of an uncle, the shutdown of the Kaesong complex, the North's third nuclear test, and certainly that rhetoric has continued. A big zero. Oh, well…

5. Pakistan (1). A major terror plot is foiled — but not before the investigation finds a Pakistan link that further sours U.S.-Pakistan relations.

6. Pakistan (2). Better news: Business-to-business and people-to-people contacts (including Asia Society initiatives!) spur significant breakthroughs on the India-Pakistan front. Not quite peace at hand, but a real thaw.

Again, no such luck. Unfortunately, if anything India-Pakistan relations took a step back in 2013. Things became especially fraught over the summer due to skirmishes between the Indian and Pakistani military along the Line of Control, some of the worst border violence between the two countries in the last decade. Certainly cannot say we've had a "real thaw." No points on this one.

8. Iran (2). In the wake of Iran (1), negotiations press forward on the nuclear front — and all sides (save Israel) pronounce themselves pleased with the diplomatic efforts.

Yes — though I should have foreseen that members of Congress here are as displeased as the Iranian hard-liners. And I didn't go so far as to predict the interim deal on the nuclear front. A 3/4 point.

10. Bangladesh-India-Mongolia are 1-2-3 in Asian economic growth.

Although Mongolia has been a dynamo, Bangladesh was far from the top (and of course suffered the calamaties of those huge factory fires), and India (by its standards at least) slumped. No points.

11. Where's China, you ask? They'll be fine — the big slowdown won't come — and every month will bring a new Xinhua image that shows that Xi Jinping really is a "man of the people."

A China-savvy colleague helps with this one: "As with anything with China, it is more ambiguous compared to other nations. Netizens have often rejected the official rhetoric — social media reflects this. While indeed the State shows Xi Jinping as the 'man of the people,' in conjunction with the Internet it is difficult to place his actual popularity and public support. As for the economy — more to come, but as with China, it is simply a matter of degree. The economy has slowed, but the growth rate is still high. Also, the economy leads to the question of, Why praise high growth when you can't even live in the country healthfully?"

12. Where's India? For all the talk of a sweeping clean-up of corrupt practices, nothing much more happens on this front than in the South China Sea diplomacy. The well-run and well-behaved Tata Sons thrives under new leadership, but otherwise the stories of graft only spread, as does the drag on growth.

Another 1/2 point. Not much movement on the corruption front, and yes, that certainly helped keep growth well below the levels of recent years. But it would be perhaps unfair to say that "stories of graft only spread."

13. "Gangnam Style" viral man Psy produces a sequel that crashes YouTube and Twitter for a day and has parents all over the world wondering how to stop their children from dancing inappropriately in their living rooms.