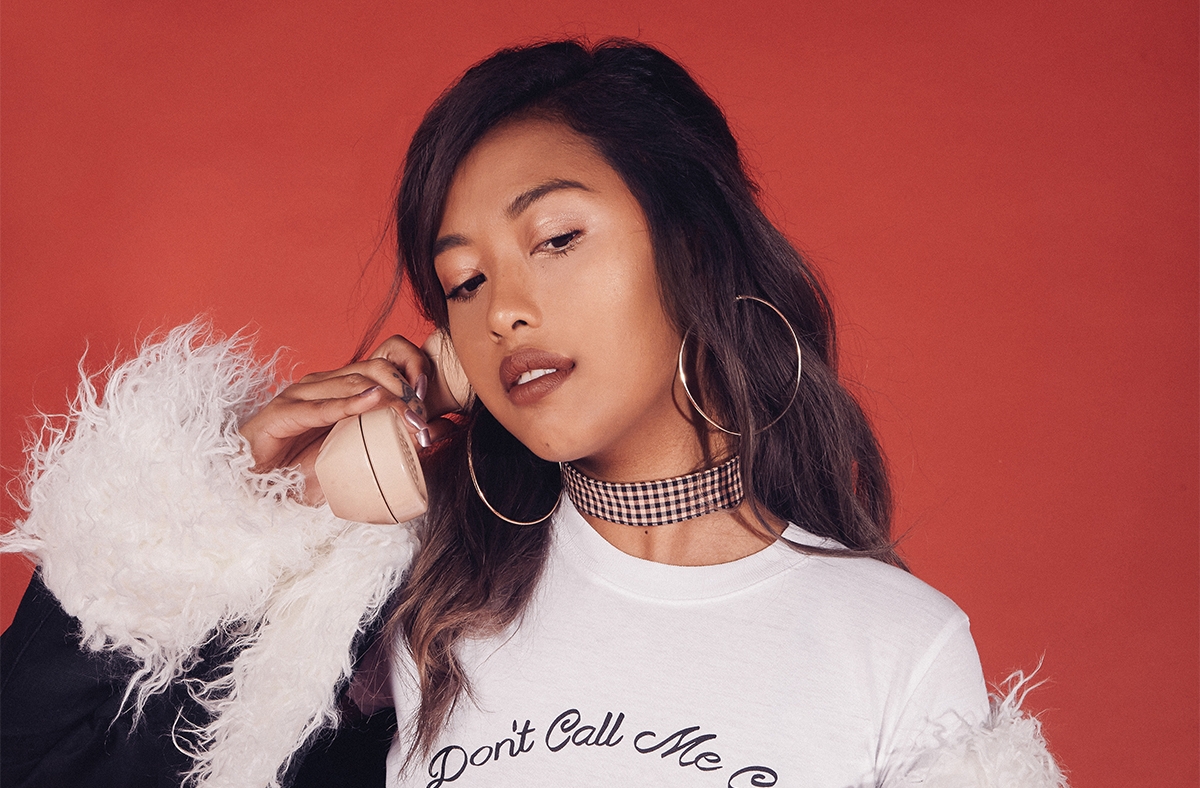 Cambodian-American singer and songwriter Satica is one of music's rising stars. (Damian Borja)

Before Satica was the rising contemporary pop and R&B musician Satica, she was just known as April Nhem. The daughter of Cambodian immigrants, Nhem grew up in a diverse and tight-knit African American and Cambodian enclave of Long Beach, California, an upbringing that inspired the eclectic mix of genres — like indie rock, hip-hop, and R&B — that influenced her own music. Satica’s interest in music began at a young age. She first began singing at the age of five and by 15 was writing her own songs. After self-releasing a musical project called Sirenum in 2014 and sharpening her skills as a songwriter for artists under the massive K-pop label SM Entertainment, Satica released her first EP, Drippin’, in October 2017. Her music most recently made a splash on music streaming platform Spotify, when she was a featured artist in celebration of Asian Pacific Heritage Month.

Satica recently spoke with Asia Blog about the cultural contrasts between Cambodians and Cambodian-Americans and why the lack of diversity in music isn’t as apparent as it is in film and television. Portions of the interview have been edited for clarity.

You are first generation Cambodian-American. How much exposure did you have to your own family’s history and roots growing up in California? Is it something you talk about openly with your family?

Growing up in Long Beach, I didn't feel too disconnected from my Cambodian roots. Long Beach has the highest population of Cambodians outside of Southeast Asia, so my neighborhood was predominantly Cambodian and African American. Many of the Cambodian families in my neighborhood were experiencing similar struggles in assimilating to American culture after experiencing the trauma of the Khmer Rouge, so it created a sense of camaraderie. Many Cambodians in the neighborhood were struggling financially and literally everyone in my apartment complex was Khmer, so we formed a community where the families could rely on each other. Everyone that was around my parents’ age was my ming (aunt) and pou (uncle), all the adults in my area spoke Khmer, many of them still wore traditional casual clothing like sarongs, I ate traditional Cambodian food and used traditional Cambodian cooking utensils, and we had multiple Cambodian grocery stores in the area.

I'm sure it was quite a culture shock for my parents, but I think having all the other refugees in Long Beach made it a little easier for them. Though my mom knew a little bit of English, she could get away with a full day without speaking any. That's pretty impressive for being in the U.S. Although life is very different as a Cambodian-American versus a Cambodian from Cambodia, I think being in Long Beach was probably the best place that my parents could have chosen to maintain and teach my siblings and me about our roots.

I remember my dad always made a point to tell me about his experience of the Khmer Rouge and Cambodia — as early as kindergarten, and maybe even earlier. My mom even went to my sister's class as a guest speaker and spoke about her experiences as well. I remember eating animal crackers in the classroom and taking in as much as I could as a 4-year-old. Both of my parents have experienced a lot of pain and tragedy in their lives, and it was never a secret for some strange reason. It wasn’t necessarily openly talked about, but it also wasn’t restricted from discussion.

The moment I felt like I truly understood my family’s history was when I went to Cambodia for the first time. It was an eye opener in both positive and negative ways because there are things that sometimes you just don’t want to know about your loved ones, but at least it provided some clarity about where I came from and the things my family went through.

Entertainment, in general, has historically been a difficult space for Asians and Asian Americans to break into. As Hollywood moves toward diverse storytelling, is there movement in the music industry as well?

I think we in the music industry definitely still have a long way to go — but that we’re moving in the right direction. People being more vocal about diversifying the industry is helping, but it’s a slow process and it is still very difficult for Asians and Asian Americans. I was so happy when people began to speak out about whitewashing in film and supported the backlash against the need to “Americanize” storylines that aren’t meant for a white person. It’s a little different with music — film is heavily visual, so you can definitely identify when someone is whitewashing. But while music can have visual elements, it’s fundamentally just sound. When people don’t blatantly see the issue, it’s not as apparent.

There are a few artists who represent the LBGTQ community, and as well as different races and ethnicities, but a lot of them are still trying to break barriers. It’s an uphill battle, and I want to see everyone win, but it’s still tough.

I don’t know how urgently music executives are trying to make changes. Being an Asian American artist is especially hard. I feel like I have to mask my Asian-ness in order to appeal to a larger market, which may or may not be true. But I just don’t care anymore. That’s why it’s so encouraging to see K-Pop really setting the mold for Asians and Asian identity. The fandom is crazy, which is so cool to watch, and I’m very intrigued to see how it will shake up the American market.

How does your Asian American identity and upbringing influence your songwriting and music taste?

I’m not sure exactly how much of an impact my Asian American identity has had on my music taste. Growing up, I never really had an Asian American pop artist to look up to. I had Cambodian karaoke and whatever I saw and heard on the TV and radio. No one on television really looked like me, and no one on the radio sounded “Asian.” I’m not sure what ‘Asian American music” even sounds like. I can think of the few Asian American artists who have reached the Billboard charts, but there isn’t a definitive sound where I say “Oh yeah, that sounds Asian American!” I can recognize a song and be like, “Oh, that’s a cool Asian sound or production,” but I think it’s a little more difficult to try and translate what that identity really is, vocally and lyrically.

There are also so many countries in Asia and so many different variations of music that you can’t reduce the continent to a single sound. I want to be in a space where I can eventually bring my Asian heritage into my music, but I’m just trying to establish myself as an artist in general.

I definitely feel like my upbringing has a lot more weight in my music and songwriting. I talk about what I know, what I’ve seen, and what I’ve heard. I lived on the east side of Long Beach for the first 18 years of my life, so West Coast rap and hip-hop in general was very influential. My sister used to listen to the radio station K-Earth 101 and they played a lot of oldies and I fell in love with Motown. There’s an old VHS video of me singing KC & Jojo’s “All My Life” at four years old, so classic 90’s R&B was super influential on the development of my ability to sing. Oh, don’t even get me started on my weird emo phase! All of these different time periods of both popular and indie music has had such an influence on my taste and writing style.

Being an Asian American artist is especially hard, I feel like I have to mask my Asian-ness in order to appeal to a larger market.

You’ve gained a lot of recognition for your songwriting for K-Pop acts. What made you decide to step away from writing for others and focus on your own music and putting together an EP?

When I first started writing, I never had the intention of writing for some else. My songs always came from a place that only I knew. I think I was just enamored with the process of writing and wanted to learn that I had the capability to write good songs. I guess I never really separated the two processes of writing for myself and writing for others from the beginning, so I never felt like I had to step away from anything. It was more that I worked so hard to hone my writing skills that I had accumulated a bunch of songs — and that if people wanted them, we could talk and see what happened. If they didn’t, I made them for myself so there’s no sense of loss. I came out as an artist when I did because that’s when I personally felt like I was ready and knew I can give it 100 percent.

Who are Asian American public figures (in any industry) that inspire you, and why?

Bruce Lee, Jackie Chan, Jet Li, Alexander Wang, Fareast Movement, Chrissy Teigen, George Takei, and Ali Wong are just a few that I could think of at the top of my head that inspire me. I think they all in different ways make me proud to be Asian and make me feel like I could be different and still achieve my dreams.