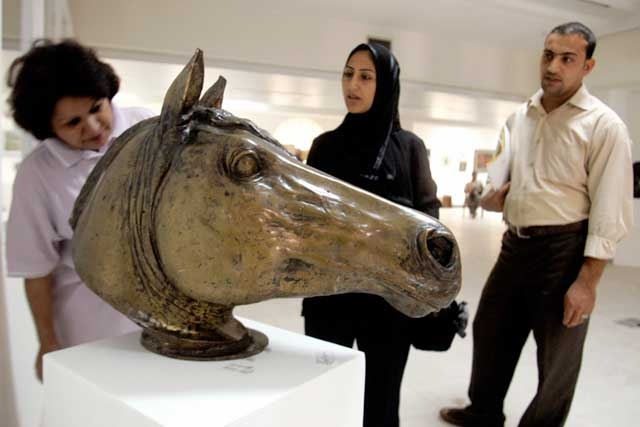 Understandably, perhaps, the Iraqi government has more important things on its plate than saving its modern art. That doesn't make the current state of Iraq's 20th century art collection any less depressing. What is left of Saddam Hussein's showcase currently resides in three run-down galleries, which are closed off from the public. Many of the paintings and sculptures inside have been damaged from heat and improper storage. Many more have been lost or destroyed entirely.

Before the fall of Hussein's regime, these pieces were housed in a stately museum attached to a building called the Center for Contemporary Art. After Hussein's regime collapsed, the building was ransacked. While it was given a new name, the National Museum of Modern Art, the museum is far from being restored to its former self. During the span of three days, 7,000 of its 8,000 paintings and sculptures were looted. What was once a grand museum is now a decrepit building marred by barbed wire, sandbags, and brick walls. Currently, the museum displays 200 of the 1,500 of the original works in its galleries and receives few visitors.

"When you see your culture, your history, devastated in this manner - whether it's intentional or not. ..." said sculptor Taha Wahaib in an interview with The New York Times. "What we saw on the street, it was heartbreaking."

Slowly, some of the collection is being tracked down and bought back by a small community of Iraqi artists and museum curators. Other pieces have been sold internationally and will be extremely difficult, if not impossible to recover.

"We haven't developed the new Iraq yet," said the museum's director, Salam Atta Sabri, 57. Without an appreciation of Iraq's arts and culture, he believes, the country cannot begin to fully rebuild itself.

Do you agree or disagree with this sentiment? How important are the arts regarding a country's strength and well-being?