The Sacred Islamic Tradition of the Hajj in 8 Photos 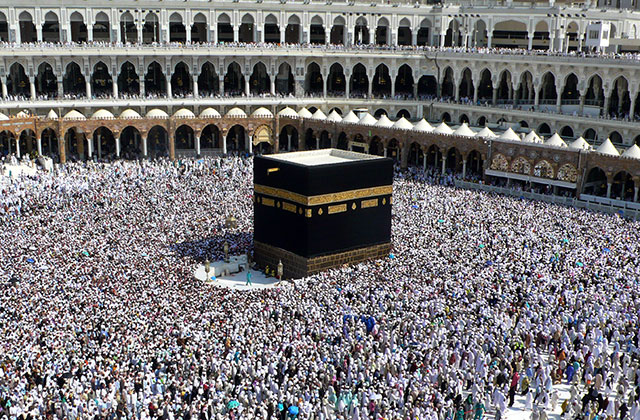 Muslim pilgrims walk around the Kaaba at the Grand Mosque in the Saudi holy city of Mecca on November 30, 2009. (Mahmud Hams/AFP/Getty Images)

This Friday marks the beginning of the annual Hajj pilgrimage, a religious tradition that brings millions of devout Muslims to the holy city of Mecca, Saudi Arabia. Paying homage to Mecca is the fifth pillar of Islam, and participation is mandatory for devout Muslims at least once in their lifetime if they are able-bodied and can afford the trip. For many, the sacred journey is the highlight of their spiritual lives.

The rites of Hajj is usually observed over a five-day period. Participants, or Hajji, don special simple, white clothing called ihram. The simplicity of ihram is designed to mask any distinctions of wealth, class, or status — in order to be seen as equals by God.

Worshippers then begin traversing the distance between the hills of Safa and Marwah seven times, in a process called sa’i which commemorates the journey made by the Prophet Ibrahim’s wife to find water for her infant, Prophet Ismail.

After this, pilgrims traverse roughly five miles to Mina, a tent city where they pray and stay until dawn the next day when they make their way to the Arafat Valley. 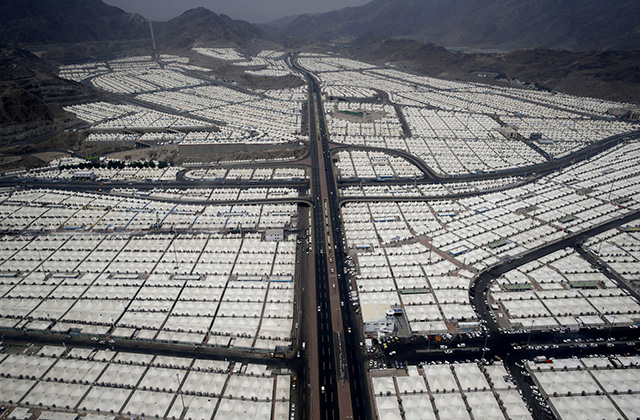 In the plains of Arafat Valley, pilgrims stand together in the open and issue prayers praising God and repenting for sins. According to Al Arabiya, the time spent in Arafat is considered the "most important day of Hajj." The rituals last until sunset, at which point pilgrims move to Muzdalifah. 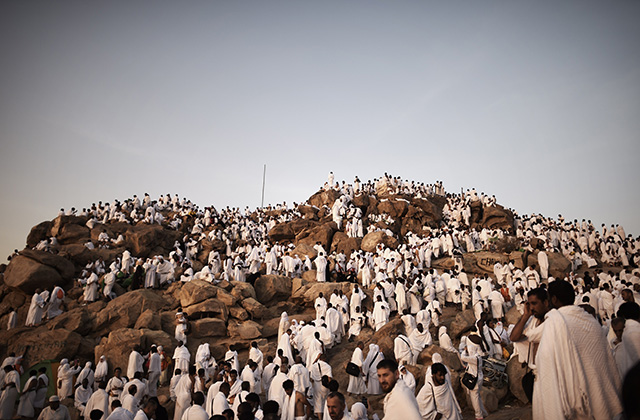 Muslim pilgrims gather on Mount Arafat near Mecca as they perform one of the Hajj rituals late on October 3, 2014. (Mohammed Al-Shaikh/AFP/Getty Images) 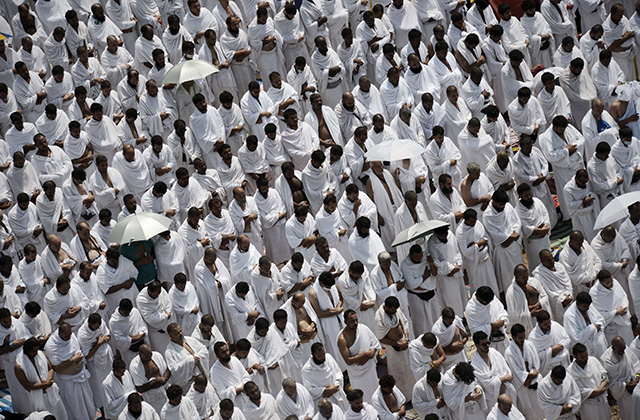 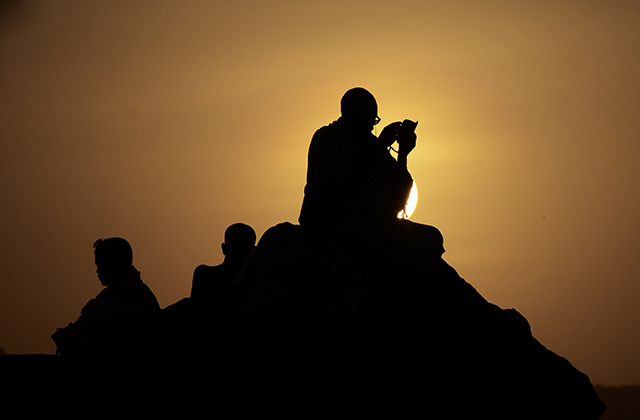 Muslim pilgrims gather on Mount Arafat, near Mecca, to take part in one of the Hajj rituals on October 3, 2014. (Mohammed Al-Shaikh/AFP/Getty Images)

The open land of Muzdalifah is an area where worshippers gather and perform the required Maghrib and Isha prayers. It is here where Hajji also collect small stones and pebbles for the ceremonies of the following day, called the Ramy al-Jamarat. 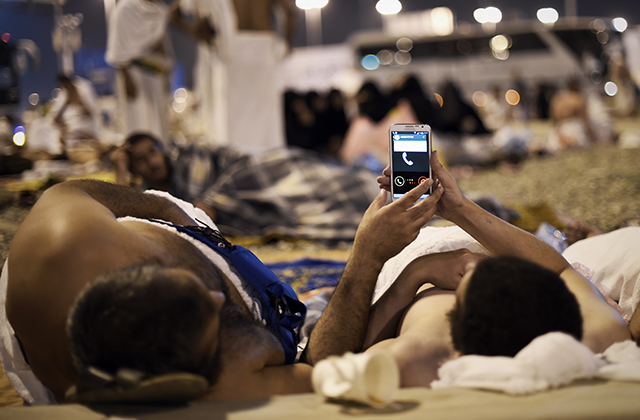 Muslim pilgrims use their mobile phones at Muzdalifah near the holy city of Mecca, late on September 23, 2014. At Muzdalifah, pilgrims collect pebbles which will be thrown in the "stoning of the devil" ritual in Mina over the following three or four days. Pilgrims then spend the night there, often sleeping in the open air, before leaving for Mina the next morning. (Mohammed Al-Shaikh/AFP/Getty Images)

The following day, worshippers then return to Mina to perform the rituals of Ramy al-Jamarat, the symbolic stoning of Satan. Devotees cast stones collected at Muzdalifah at three pillars which represent the devil. The stoning marks the third day of Hajj and the beginning of Eid al-Adha, the Feast of Sacrifice. 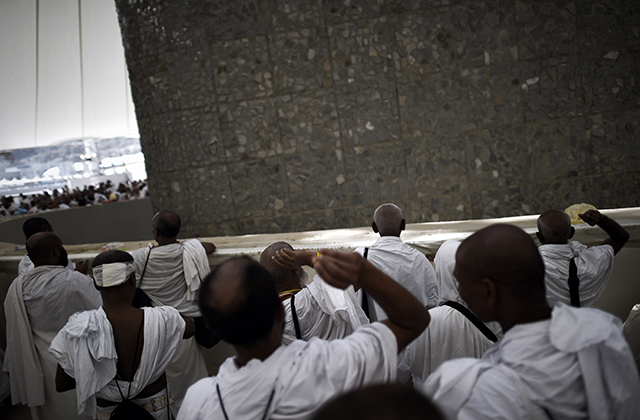 Muslim pilgrims throw pebbles at pillars during the Jamarat ritual, the stoning of Satan, in Mina near the holy city of Mecca, on September 24, 2015. (Mohammed Al-Shaikh/AFP/Getty Images)

Eid al-Adha is also celebrated by Muslims not participating in the annual pilgrimage and is traditionally marked by slaughtering animals, a representation of the Prophet Ibrahim’s willingness to sacrifice his son Ismail to God. Other forms of celebration include men shaving their heads and women cutting locks of hair. Over the three-day Eid festival, there are exchanges of gifts and greetings within families and Muslim communities and the continued stoning of the pillars. 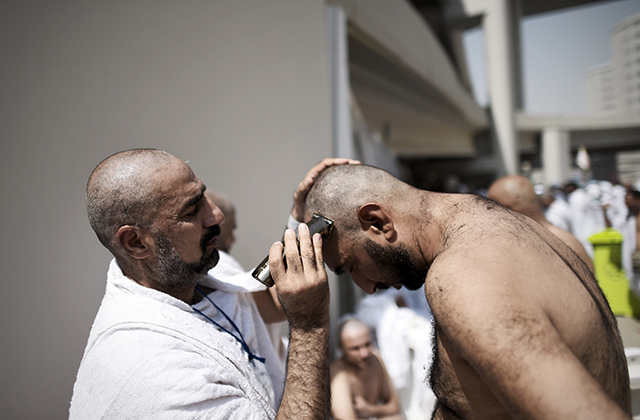 Muslim pilgrims shave their hair after throwing pebbles at pillars during the Jamarat ritual, the stoning of Satan, in Mina near the holy city of Mecca, on September 24, 2015. (Mohammed Al-Shaikh/AFP/Getty Images)

Pilgrims then make their way back to Mecca for their final tawaf walk, circling the Ka’aba seven times once more. This marks the end of the Hajj.