Roundup: Asians at the Olympics, Beyond the Games | Asia Society Skip to main content

Roundup: Asians at the Olympics, Beyond the Games 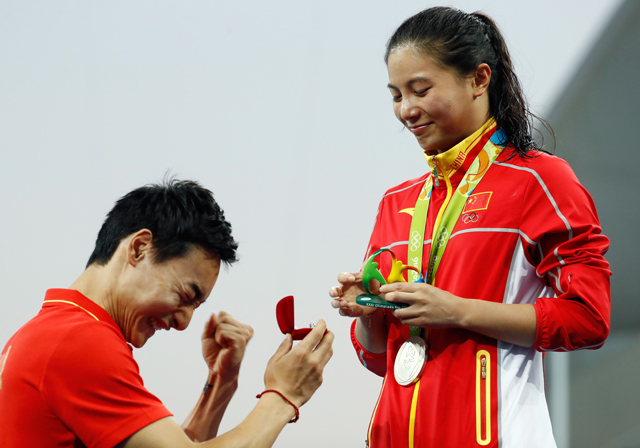 Chinese diver Qin Kai proposes to silver medalist He Zi of China on the podium during the medal ceremony for the Women's Diving 3m Springboard Final. (Clive Rose/Getty Images)

The 2016 Summer Olympics in Rio De Janeiro have seen no shortage of remarkable athletic performances from Asian athletes, as we've documented here at Asia Blog. But the Olympics is more than just a series of athletic events — it's also a spectacle. Here's a quick roundup at some of other the Asia-related stories we've been tracking in Rio:

China's He Zi didn't win the gold medal in the women's 3m springboard diving competition on Sunday, instead placing second to her compatriot Shi Tingmao. But He emerged with a rather different possession when her boyfriend, fellow Olympic diver Qin Kai, proposed marriage to her right at the podium. The gesture struck some as romantic — but others felt Qin stole his newly betrothed's thunder.

Which Asian athletes are doing best in Rio?  Learn more

No Chinese athlete, however, is having a better time in Rio than Fu Yuanhui, whose charm and exuberance — even in defeat — have earned the 20-year-old swimmer admirers across the world. Fu's more enduring legacy, however, may be her candid remark that she competed in the Games while on her period. In the New York Times' Sinosphere blog, Emily Feng writes that the remark helped shatter an archaic taboo against female athletes discussing their menstrual cycles.

The impressive victory of Joseph Schooling in the men's 100m butterfly, where he outlasted the great Michael Phelps, thrust the 21-year-old Singaporean into the international spotlight. One of the country's most visible brands, Singapore Airlines, naturally capitalized on Schooling's success by featuring the swimmer on its Facebook page. Alas, the photograph the airline chose almost completely obscured the charismatic Schooling behind two rows of smiling Singapore Airlines executives and employees. The pic — which the airline subsequently deleted — attracted widespread criticism and derision from critics.

And finally: It goes without saying that the Olympics places a lot of emphasis on winning — there's a reason people and countries obsessively track gold medal tallies throughout the Games. But for some athletes, simply making it there is an even more remarkable accomplishment. In Rio, the 18-year-old Syrian swimmer Yusra Mardini — representing the Refugee team — earned international applause for winning a heat in the 100m butterfly and placing seventh in the 100m freestyle heat.

Mardini's performance isn't the first time, however that an athlete overcame tremendous poverty, war, and strife to appear in the Games. In 1996, the Cambodian swimmer Hem Reaksmey competed in the 100m breast stroke competition, placing 46th — many seconds behind the medalists

In a recent article for the Des Moines Register, former U.S. Ambassador to Cambodia Kenneth Quinn reflected on the steep odds Hem faced simply making it to Atlanta:

When I would drive over to pick up my kids after practice, from afar the scene was the worst swimming environment I had ever seen: The concrete of the pool structure was blackened with mold and dirt; there was refuse and clutter everywhere; and the water was a dark pea green. Our children said that after an hour in the pool, they had a film of green algae on their faces.

Then, with the Atlanta Olympics approaching, we learned that Cambodia would have a team and that the two Hem children would participate, even though they were still essentially beginners. The very fact that Cambodia was able to even send a team to the Olympics seemed a miracle in itself. A society that had come close to cultural obliteration was slowly pulling itself back together.