Rivers of Ice: Vanishing Glaciers of the Himalaya 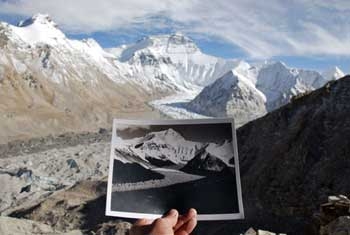 It is difficult to get everyday people, let alone world leaders, to agree on matters of climate change. However, anyone who sees David Breashears' photo exhibit, Rivers of Ice: Vanishing Glaciers of the Himalaya will have to agree on one thing: our world's glaciers are melting at an alarming rate. The volume of ice that has been lost over the last century is sobering. Some peaks have decreased by as much as 350 vertical feet-roughly the height of a 45-story building.

The exhibition features antique photographs of the Himalayan Mountains taken by early mountaineers and presents them alongside Breashears' current photographs shot at the exact same vantage points. The paired photos give cause for distress, not only on a global scale, but for nearly one billion Asians that depend on the glaciers for their livelihoods. The Greater Himalaya provides crucial sources of water for almost every major river system of Asia. Hundreds of millions of Asians who depend on glacial runoff for their water supply will suffer without this resource.

Breashears and a panel of experts discussed the issue at Asia Society on July 14. Vijay V. Vaitheeswaran, global correspondent for The Economist, moderated the panel comprised of Orville Schell, Director of the Asia Society Center on US-China Relations, Syed Iqbal Hasnain, an Indian glaciologist, and Bill McKibben, environmentalist and founder of 350.org. All agreed that the vanishing glaciers were a result of climate change.

"Most frozen things on earth are melting," said McKibben. "Human beings have raised the temperature one degree, and NASA data indicates we have just come through the warmest six months in history."

Panelists also agreed that we need global cooperation to put a stop to the planet's dependence on fossil fuels if there is any hope of turning climate change around.

Rivers of Ice: Vanishing Glaciers of the Himalaya is currently on view at Asia Society Museum in New York through August 15 Do you agree with the panel of experts? Do the vanishing glaciers in our planet's polar regions point to climate change?