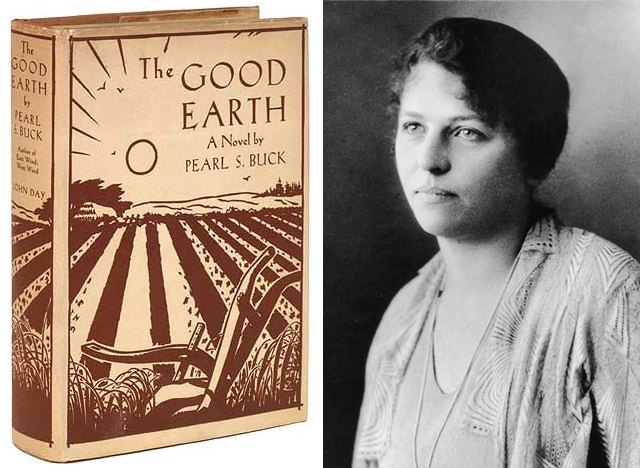 The Good Earth simultaneously manages to be both a classic and not very good. This is not, I trust, a controversial statement: Pearl Buck’s 1931 novel suffered a mixed reputation from the start. While many early readers hailed her work for its realistic descriptions of life in the Chinese countryside, critics derided The Good Earth as saccharine and simplistic. As Jonathan Spence notes in his New York Review of Books article on Pearl Buck: Journey to the Good Earth, even sympathetic biographer Hilary Spurling cannot help but describe Buck’s plot choices as “preposterous” at times.

After the Communist victory over mainland China in 1949, which received crucial support from the country's vast rural hinterland, The Good Earth, which had won a Pulitzer Prize in 1932, fell out of fashion in the McCarthy-era United States for its association with revolutionary peasants. In 2004, however, American readers flocked back to the novel after Oprah Winfrey selected it as a title for her popular book club. For my inaugural "Re-Reading" column, I decided to return to The Good Earth, the first book I ever read about China, when it was assigned in a world history course during my freshman year of high school.

The novel follows the life of Wang Lung, a poor farmer in Anhui province who gradually, through both hard work and unexpected fortune, acquires more land and money than he had ever dreamed of owning. Though Wang Lung gets temporarily caught up in the trappings of wealth (taking on a concubine and dressing himself in lavish silk robes), he eventually grows to re-appreciate the simple life of a hard-working farmer. His sons, however, lack their father’s work ethic and by the book’s conclusion it appears likely that the fruits of Wang Lung’s toils will be squandered by the excesses of the next generation.

I ventured back into The Good Earth expecting to be underwhelmed. After all, I had gone through over a decade of college and graduate school without having to re-read it. Surely, that meant it was out of date and unnecessary for the budding Sinologist of the 21st century to add to her already lengthy reading list.

I soon realized my error, however, as I happily fell into Buck’s clear, brisk prose and the story of Wang Lung the rags-to-riches farmer. The Good Earth touches on many phenomena thought of in the West as uniquely “Chinese” — female infanticide, concubines, opium-smoking, footbinding — but Buck also spotlights the banality of daily routines of life in rural China, recounting in detail the quotidian activities of Wang Lung, his loyal but unappreciated wife O-lan, and their family. Buck, a missionary’s daughter and agronomist’s wife who lived in China from childhood until her early forties (though with occasional time away in the United States), clearly made close observation of the society around her and used this knowledge to craft a book more notable for its realistic portrayal of rural Chinese life than for its plot. Small scenes describing events such as weddings and funerals provide insight into the social rituals of Anhui province. And while in many accounts of the late Qing and Republican era the central state plays the leading role, the residents of Wang Lung’s community have little interaction with the government above them, their lives embodying that old chestnut, “The sky is high and the emperor is far away.” For people living far from the center of power, events in Beijing would have had very little impact on their day-to-day lives.

Buck also guides her readers away from regarding China as a cohesive unit, a misperception still all too common today. Driven by famine to seek refuge in a southern city, Wang Lung and his family find themselves adrift in an alien culture, where language, food, and behavior all differ from those of their home. Wang Lung ekes out a living as a rickshaw puller, traversing the city’s streets but never penetrating the fabric of its society:

He lived in the rich city as alien as a rat in a rich man’s house that is fed on scraps thrown away, and hides here and there and is never a part of the real life of the house.

Nor does Wang Lung have any conception of himself as one of the millions that outside observers would lump together as “the Chinese”:

And when on another day he heard a young man speaking — for this city was full of young men speaking — and he said at his street corner that the people of China must unite and must educate themselves in these times, it did not occur to Wang Lung that anyone was speaking to him.

What’s perhaps most remarkable about The Good Earth is that many of the issues Buck raised 80 years ago are topics of discussion in present-day China. Wang Lung struggles with social mobility. He finds that having money means little to those around him if it is not accompanied by a change in his dress and behavior. During their time as refugees in the city, he and his family cling to the bottom of the social ladder, struggling to keep their heads above water in the face of indifference from those around them — an experience shared by the millions of migrant workers now residing in China’s urban centers. Official corruption, a plague to today’s Chinese government, makes an appearance when a magistrate steals funds intended to pay for dike repairs; when the public discovers his deed, the man commits suicide. And the lives of Chinese farmers remain precarious, as dependent on good weather as they are on hard work.

Though I found the book vivid and engaging for its verisimilitude, The Good Earth’s literary qualities are less impressive; the book reminded me in many ways of its near-contemporary, Gone with the Wind (1936), particularly for its glorification of “the land” and “the soil” as the foundation of life. But I do think that it deserves a spot on the bookshelf of anyone heading to the Chinese countryside for the first time who wants to know a bit about the history of Chinese peasant life.

In a straightforward but highly detailed manner, Buck has composed a classic account of rural Chinese life. That The Good Earth lacks clear temporal landmarks — which critics argue perpetuates the myth of China as eternal and timeless — in fact serves to emphasize the continuities between Wang Lung’s era and our own. With The Good Earth, Pearl Buck demonstrates that even a bad book can be worth reading.