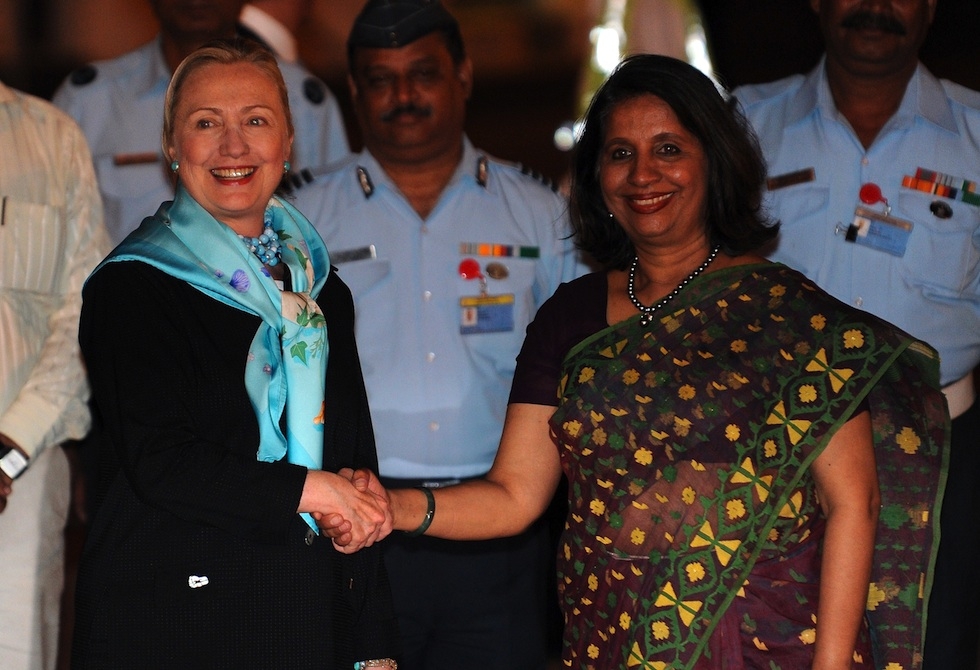 In a wide-ranging speech to Asia Society in Washington Thursday, Indian Ambassador to the United States Nirupama Rao described what she sees as substantial recent progress in deepening ties between the United States and India. Commenting on the June U.S.-India Strategic Dialogue, she said she was "upbeat about the future trajectory of India-U.S. partnership, which is full of hope, promise and opportunities for the benefit our two peoples."

Covering cooperation on trade, foreign policy and education, Rao described the U.S.-India strategic partnership as "important, both in the pursuit of achieving India's national development goals and for advancing global peace, stability and progress." She noted that "the compass is set in the right direction for our relationship, the hands on the wheel are steady and mature, the terrain is well scouted, and we have not lost our bearings. The partnership is yielding dividends, which are tangible and affect the lives of our two peoples in a positive manner."

Economic cooperation. The U.S. and India are developing a bilateral investment treaty that she said "would enhance transparency and predictability for investors, and support economic growth and job creation in both countries." The Ambassador recognized U.S. concerns about Indian economic reforms — which she said would not be disrupted — while also calling on the United States to take action on visa and market access for Indian business. Arguing that these reforms on both sides would benefit both economies, she said Indian IT companies had supported 280,000 jobs in the United States in 2011 and invested more than $5 billion dollars through acquisitions and green-field projects.

Education cooperation. Rao noted the progress of the U.S.-India dialogue on education, which announced the first grants under the Singh-Obama 21st Century Knowledge Initiative, building research and educational ties between U.S. and Indian universities.

Foreign policy. Rao shared her views of the "increasing convergence of interests when it comes to ensuring peace, stability and security not just in Asia but in the world at large." She elaborated that "our mutual understanding on critical issues, including on the global economic situation, terrorism, Afghanistan, regional challenges and Asian stability has become ever stronger and more emphasized."

Defense cooperation. Rao noted that the two militaries "once unfamiliar with each other, now hold regular dialogue and joint exercises in the air and on land and sea ... There is no, or insufficient, acknowledgement of how our defense trade, which was negligible a decade ago … is now worth over $9 billion, and it is bound to grow." She cited recent purchases of C-130J Hercules aircraft, and contracts for C-17 Globemaster III aircraft, P8i aircraft, Heavy Lift helicopters, and others.

Click here for a full transcript of Rao's comments. For other accounts of this Asia Society event, see Indian Express and the New York Daily News.

Rao's remarks followed on a preview of the Strategic Dialogue for Asia Society members and the U.S.-India World Affairs Council in June by Assistant Secretary of State for South and Central Asian Affairs Robert Blake and USAID Assistant Administrator Nisha Biswal.