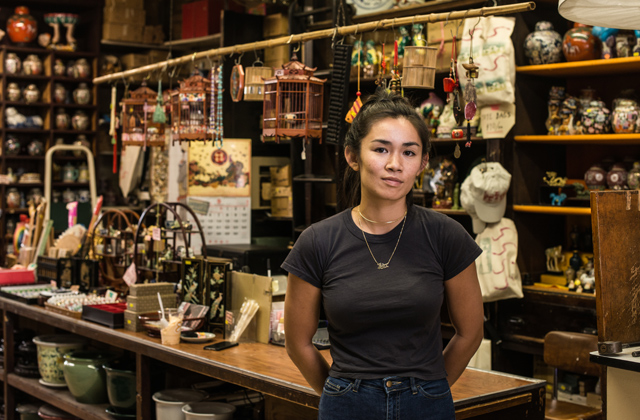 After living abroad in Asia, Mei Lum moved back home to New York’s Chinatown in 2015 to discover that her family was in the process of selling their historic shop, Wing on Wo & Co. The shop had been in Lum’s family dating back to the 1890s, when it first opened on Mott Street as a general store, but had recently struggled to keep up with a rapidly changing neighborhood.

Not ready to lose what she felt was an integral part of Chinatown’s soul, Lum decided to forgo plans to attend graduate school in order to save the family business. In addition to taking on her role running Wing on Wo & Co as its 5th-generation owner-in-training, Lum founded a community initiative called The W.O.W. Project out of a desire to reinvent the store as a space that promotes community building by hosting panel discussions, artist residencies, and workshops.

Now 26, Lum works in the Chinatown community to promote awareness about the issues local residents face and encourage dialogue about the future of the neighborhood. Since narrowly avoiding its sale, Wing on Wo & Co has been profiled in The New York Times and the family was recently honored at a celebration of “local community heroes” by the Museum of Chinese in America.

Asia Blog spoke with Lum about her decision to take on the family business, gentrification in New York, and why Chinatown is much more than just a place to buy cheap groceries or fake handbags.

What are your favorite memories from growing up in New York’s Chinatown?

A lot revolves around our family shop. I would always go there after school and hang out with my grandma in the back kitchen where she would have afternoon snacks prepared. My elementary school was only about three blocks away from the store. There was also a lady with a stand across the street where we would line up and wait for her to make fresh egg cakes. She knew my grandma, so she’d often signal to us so that we could go and skip the entire line. Really, all of my friends and family coming to the shop is what Chinatown has always been for me. The bulk of my memories is there.

Why did you want to take over the family store?

I used to live in China and Southeast Asia. I initially moved back to New York because I wanted to pursue graduate school and further my education in international development and do more work in the NGO youth development and community development sector.

But when I returned, my family was at a turning point with the store and were in the motions of putting it on the market. While I tried to understand their situation, I then met Diane Wong who is a doctoral candidate at Cornell University who is writing her dissertation on the gentrification of Chinatowns in the United States. She started her research in New York City’s Chinatown and walked into our shop because she wanted to interview both me and my dad. At that time, I had only been home for a month so it was a good way for me to confide in a third party and explain the context of what was going on with my family and the shop. From there, she offered to take me on all of her interviews for three months.

Through that experience and that process, I realized that the situation that my family was going through was larger than just us. If we sold the shop, it would affect our block, our neighborhood, and our community. I started thinking about how I could, in my capacity, reinvent the store and put some young, new energy into it. I wanted to make it a space where community members could come and work out these issues that are still happening around gentrification.

Could you talk about what The W.O.W. Project is and the idea behind it?

The W.O.W. Project is a community initiative housed out of my family’s shop — a porcelain shop that is the oldest store in Chinatown. The idea for The W.O.W. Project has historic roots: Back when Chinatown was just starting in the early 1900s, there were a lot of general stores that acted as a space where people could buy their goods and also gather and talk to one another — catch up, smoke in the corner, eat roast pork or chicken, etc.

In a way, the W.O.W. project functions the same by trying to gather people in the space to talk about certain community issues and to participate in a dialogue about the concerns about the neighborhood’s changes.

What do you see as some of the biggest issues facing Chinatown?

I think there’s a lot of pressure coming from the city — it starts from the mayor and his agenda and then trickles down to the local level. If you think about development and neighborhoods, there’s this whole issue of affordable housing and how ethnic neighborhoods in New York are seen right now. I think a lot of neighborhoods throughout the five boroughs are seeing exponential rates of gentrification because the mayor said he would create more affordable housing, something that I think is a very loose term. Affordable doesn’t mean the same for everyone.

A lot of the issues come from the city and the local government’s urban planning and rezoning policies that dictate the future and what it would look like for our community.

How do you think those new to the neighborhood and local residents can have a better relationship?

I think that it starts from curiosity and a willingness to learn more about the neighborhood you’re moving into. I can only speak about Chinatown specifically, but people come in with their assumptions. Chinatown is often seen as this place where you go for cheap groceries, dim sum, or (if you’re a tourist) buy fake handbags.

But it’s much more than that. It takes a lot more effort to get past those stereotypes and surface-level characteristics that a neighborhood is known for. If you strike up a conversation with a local business owner or you attend an event that brings up certain local issues or resident stories, that’s the first step in trying to learn more about a community. The second step is getting more involved and figuring out what that means for you in your capacity. Involvement for you might not be creating a community initiative. It might look different.

How do you think young people can play a more active role in the efforts to preserve Chinatown’s heritage?

What both groups can do is support local businesses and the local economy of the neighborhood. They can also volunteer time to organizations that support the community like The W.O.W. Project or tenant organizations. There are so many groups and it only takes 20 seconds to go online and figure out what’s best for you.

The W.O.W. Project just reached its first anniversary. What are some of your goals for W.O.W. in the coming year?

I think we’re looking to do more sustainable, long-term impact projects. The first year involved a lot of experimentation and one-off programs like panel discussions. Now, we’re launching our big fundraising campaign at the end of the month and will be rallying community support for that so we can do even bigger and better things in our second year. We’re looking at longer-term programming where a project could take between six months to a year so that we can have a deeper impact and build deeper relationships with the people we're working with.