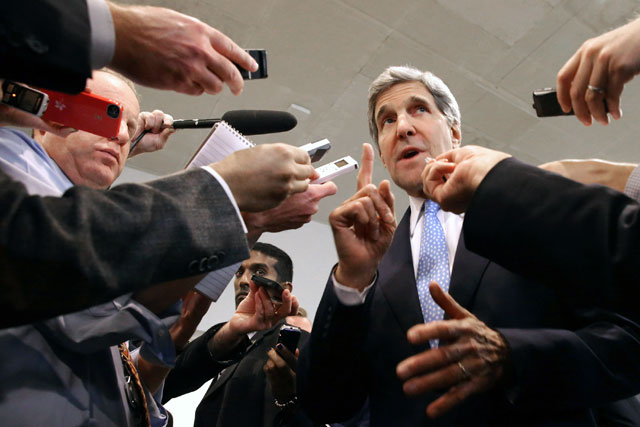 U.S. Secretary of State John Kerry speaks with reporters at the U.S. Capitol before testifying to the Senate Banking and Urban Affairs Committee in Washington, DC on Nov. 13, 2013. (Chip Somodevilla/Getty Images)

Today, the Obama administration announced it would target an expanded list of companies and individuals for violating international sanctions against Iran. The surprise announcement preceded a Senate Banking Committee hearing on Iran, which included testimony from Wendy R. Sherman, the State Department's lead nuclear negotiator with Iran, and David Cohen, Under Secretary for Terrorism and Financial Intelligence at the Treasury Department, with the Obama administration aiming to dissuade members of the committee from pursuing additional sanctions against Iran. Though the Banking Committee decided to shelve new sanctions legislation after the announcement, some members of Congress indicated they will continue to push for new sanctions.

Why is a deal that President Obama heralded as an "important first step" toward a key U.S. foreign policy objective — halting Iran's nuclear program — facing such opposition in the U.S.? The answer to this question appears to be much the same as the reason some in Iran oppose the deal: critics in each nation think the other country came out on top in the nuclear negotiations. Domestic debates about the deal in the U.S. and Iran are strikingly similar and may even affect one another.

It remains an open question whether the new enforcement actions announced today will assuage the concerns of members of Congress that oppose the interim deal. The new measures could also heighten opposition to the deal in Iran, if Iranians view them as evidence that the U.S. has backtracked on its commitment not to apply new sanctions. The U.S. and Iranian governments each have to juggle two negotiations: one at home, the other abroad. And opponents of the deal may find their criticism domestically has unintended consequences internationally.

Conservative pundits in the U.S. have argued that Iran got the better end of the interim deal. In a piece for CNN, political commentator David Frum said Iran got "a sweet deal" despite being a "bad actor." John Bolton, former U.S. Ambassador to the United Nations under President George W. Bush, was harsher, calling the deal "abject surrender." Charles Krauthammer, a columnist for The Washington Post, went so far as to say the "Iran agreement is a farce, the worst deal since Munich in 1938."

Some members of Congress have been equally vocal. They are unhappy with the deal because it does not fully dismantle Iran's nuclear program, yet provides Iran with limited sanctions relief. Senator Ted Cruz, Republican of Texas, called the agreement "a dangerous, wrong-headed deal." Senator Bob Corker, Republican of Tennessee and the ranking member of the Senate Foreign Relations Committee, called the deal "a total victory from [the Iranian] standpoint." To complicate matters for the Obama administration, Democratic lawmakers have also expressed reservations. Congressional opponents of the deal are seeking to impose additional sanctions on Iran that would kick in if it reneges on its obligations under the interim deal or if a final deal is not reached within six months.

The Obama administration has responded that additional sanctions legislation could jeopardize the negotiations altogether. Iranian Foreign Minister Javad Zarif has said, "if there are new sanctions, then there is no deal."

In Iran, advocates such as Foreign Minister Zarif have also faced domestic opposition. Iranian lawmaker Hamid Rasaei said the nuclear deal was a "chalice of poison" and alleged that the Iranian government was tricking the Iranian people into accepting it through "media manipulation." Another lawmaker, Ruhollah Hosseinian, contended the deal "practically tramples on Iran's enrichment rights." Iranian news site Alef called the agreement "oppressive" and asserted that Foreign Minister Zarif had returned "empty handed." Members of The Committee to Protect Iranian Interests, a hardline activist organization, pelted President Hassan Rouhani with eggs after the deal was announced, condemning Iran's negotiators for "burn[ing] all our winning cards in the first phase."

Interestingly, Iranian criticisms mirror American criticisms. Just as American critics have argued that the deal favors Iran, Iranian detractors have contended that the deal is too favorable to the United States. Certain political actors in both countries are prepared to block the compromises necessary for a final agreement. Yet domestic criticism in one country could blunt domestic criticism in the other. It may be difficult for Iranian critics to sustain an argument that the agreement favors the U.S., when some American lawmakers are threatening to undermine the agreement.

This dynamic is playing out most strikingly in the case of Israeli criticism of the deal. Israeli Prime Minister Benjamin Netanyahu has been a harsh and vocal critic of the nuclear agreement. He deemed the agreement "a historic mistake" that "has made the world a much more dangerous place." Prime Minister Netanyahu's statements have informed resistance to the deal in the U.S. but have had the opposite impact in Iran. Foreign Minister Zarif has invoked Israel's antipathy toward the deal to fend off conservative critics of the deal in Iran.

The Obama administration's announcement today shows that domestic debates could significantly influence the fate of the agreement and the future of Iran's nuclear program. How domestic rhetoric and politics play out in the negotiating countries could complicate matters as talks continue. The nuclear negotiators have an unenviable task. Even as they craft an international agreement few thought possible a few months ago, their toughest challenge may be selling that agreement at home.