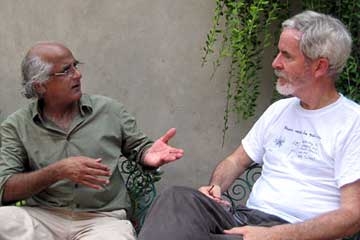 Salman Rashid, adventurer and prolific author, had offered to guide our discovery tour of Pakistan — in the spirit of Kipling's Kim and his lama, or earlier of the Victorian genius and spy Richard Burton. Our terrain would run from Karachi — from the mouth of the Indus River, that is — through deserts and lush fruitlands to Kashmir and then to K2, the second highest mountain peak on Earth.

But then, unexpectedly, blessedly, our trip with this soulful Punjabi gentleman broke down in tears in the village near Jalandhar (now India) where Rashid's father's Muslim family was massacred at the moment of Pakistan's birth, by Partition, in August 1947.

Rashid's grandfather was the prized doctor in that village, and he had doubtless treated the frenzied man who killed him with a shotgun blast through the eye and then lashed up the mob that dispatched the great aunts and cousins, as he says, "with swords."

This was the story that Rashid heard first-hand for the first time three years ago, from the son of the man who led the riot of killing. The story does more than overtake the travelogue. It fortifies the impression that "Af-Pak" is the wrong name for what afflicts this part of the world, and the rest of us. The real name of the root cause of so much injury and anger out of South Asia is more nearly "Indo-Pak." As Rashid recounts, it is a traceable and perhaps even a treatable source of misery when people are given the chance to absorb the whole awful history.