Podcast: Kamil Khan Mumtaz: Back from a Modernist Hell 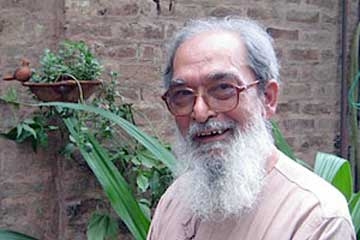 LAHORE — Kamil Khan Mumtaz, an eminence in Pakistani architecture, is giving us the gentlest of introductions to a revival in Pakistan of Islamic thinking about art and design and meaning in life. He's tracking two West-to-East journeys of his own over the last 50-plus years: one professional and artistic, the other personal and spiritual, and of course they're roughly parallel. In his student days in London in the 1950s, he was a modernist after the examples of Mies van der Rohe and Frank Lloyd Wright. LeCorbusier, a heroic model at the time, had the dream assignment of designing Chandigarh, the new capital of the Indian Punjab, at Nehru's personal invitation.

But what impressed young Mumtaz even more back home was how little he knew of the native tradition and the depths of the difference with the new: "really a difference in world view," he tells me — between the materialist modernism and the traditional ease with metaphysical and spiritual planes. What he learned over a hard journey writing the comprehensive history of Architecture in Pakistan was the radical value of proportion and ideal forms, and the importance of copying the classical exemplars — as imperative as innovation and invention. The message in modern buildings is man's technological prowess, he says; the highest praise is "how exciting!"

"It's all excitement… They're like huge billboards saying: 'go for it,' or 'you deserve it.' It's consumerism. Whereas traditional buildings set you in a different dimension: suddenly there's a hush and quiet… Modern architecture titillates the senses; traditional art moves us to contemplation. That's the difference."

The inner man was in transition, too, if only because "you cannot practice traditional art without a conviction in the truth of what it's based on… That cannot fail to affect literally your whole life, and it has transformed mine." The core of his Islamic belief and practice is the Sufi tradition. He can laugh at the notion that the West toys with Sufism as a sort of "Islam Lite." In the Mumtaz scheme of things Sufism is about a profound searching for the truth… "The truth more and more becomes the unity of all creation and the oneness of all mankind. That is its most important aspect. I would say the two distinctive and distinguishing things about Islam are tolerance and beauty. No other religion to my knowledge makes it an article of faith to recognize the truth of all religions," and most explicitly of the Hebrew Bible and the Gospels of Jesus.

Of the present day in general, he says, with half a laugh, "We're all going to hell. We're destroying ourselves." We have the power to blow up the planet, and a post-modernist outlook that there is no truth, no right or wrong. "Combine these and you've got a real killer."

Modernism turns up as the villain again when I ask for his "capsule understanding" of Pakistan at the age of 64. The extremism in so many dimensions of Pakistani life today, he said, "is nothing but the flip side of modernity."

Pakistan was a modernizing project. It begins with the deluge, the road-roller that went over us that is Western colonialism. We were just knocked out of our senses: 'What hit us?' And so there is anger in the street, anger against the West, which just bulldozed us. Remember, we, the Muslims, identified ourselves as one people, and we were the superpower. So there is anger against the Western modernizing forces for having replaced us as the dominant power; anger against our own brother Muslims for having strayed from the true path; anger at our state for having lied to us and not delivered what it promised to do. So there are all of these angers, rages which are now finding expression…

I was happy to tell Mumtaz, after two long conversations in his verdant second-floor porch and his library study, that any visitor might find in the spaces he created, if not proof of his doctrines, at least a warm, peaceful, comfortable confirmation in the harmony of many rectangles, of rose-colored rugs and "burnt Siena" bricks, of low cushions and seats and books to the ceiling. Immediately on entering it felt like a space I'd been trying to imagine, or maybe dreamt. He'd conceived that library in his "modern" days long ago, but it had evolved continuously, he said. It has "a certain presence and timelessness," he admitted. "Those are qualities that will strike even the least spiritual of persons, only because the spirit is in all of us."