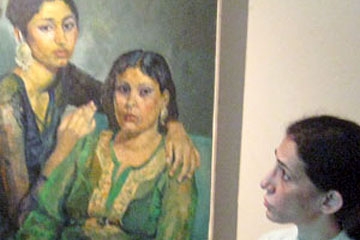 LAHORE — Pakistan's greatest prose writer, Saadat Hasan Manto, set his most famous story in the Lahore lunatic asylum, to render an immortal judgment on the Partition of India and Pakistan. As Ayesha Jalal (who chances to be Manto's great-grand-niece) sums it up in conversation: to Manto it was clear that "the madness outside is greater than the madness within the asylum."

The Partition had in fact two still-astonishing chroniclers of the horror that displaced nearly 15 million people and killed about a million. One was Margaret Bourke-White, whose black-and-white photographs for LIFE magazine stared into the shrouded eyes of the living dead on the march. The other was Manto, whose stories don't just drip with the cold sweat of rape, murder and unspeakable loss along the way; they also drill far into the absurdity of that vast project of separating neighbors.

I am thinking of a Manto story, "The Last Salute," about Rab Nawaz and Rab Singh — two soldiers who'd gone to the same primary school in a Punjab village, who'd joined the army on the same day and fought for the British 6/9 Jat Regiment in Italy, and in their final, fatal encounter are fighting for Pakistan and India in Kashmir — "the friends of yesterday… transformed into the enemies of today."

Manto writes realistic tales that brim with his own generous, forgiving embrace of sinners and saints, but incomprehension is the telling note of his Partition stories. As Ayesha Jalal notes for us: "… he cannot understand why India is partitioned. He cannot understand the logic of it." These are notes of incomprehension and absurdity that recur spontaneously to a visitor in Pakistan even now, 64 summers later.

Jalal is writing a biographical and literary reflection on Manto, to be published on the centennial of his birth in March, 2012. She is reminding us that in his short career, abbreviated by alcoholism and death at 42, Manto wrote brilliant sketches, successful screenplays and radio scripts, and essays as well as fiction. His nine "Letters to Uncle Sam" from the early 1950s stand up as playful, pungent and prophetic.