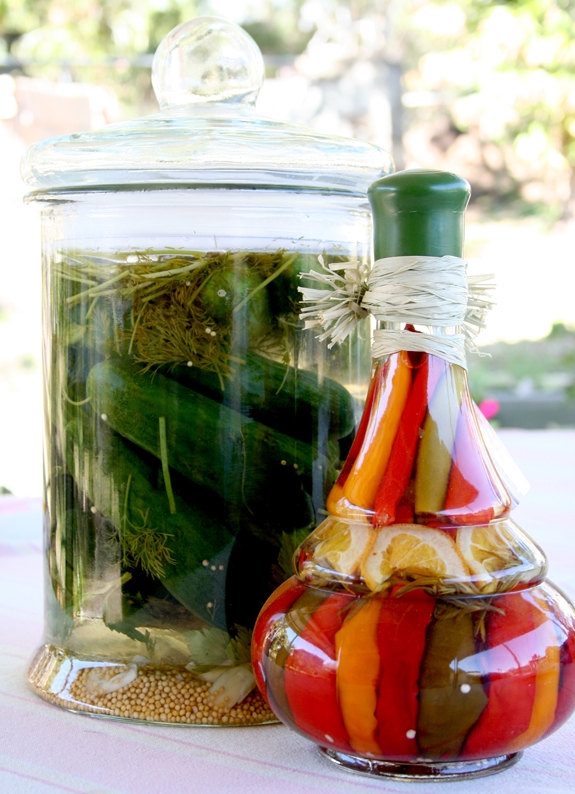 Lucy Norris's book Pickled: Vegetables, Fruits, Roots, More--Preserving a World of Tastes and Traditions (Harry N. Abrams, 2003) presents a varied collection of more than 80 pickle recipes--all passed down through families for generations. The dishes are international in scope and range well beyond cucumbers to a wide array of vegetables, fruits, and even a selection of meats and fish.

Norris covers traditional American pickles as well as an assortment of Asian pickles. For many of the Asian pickle recipes she spoke to people who now live in the US and whose recipes are linked to people, places, and events that are "preserved" in their memory but are no longer in their everyday life. "In many circumstances, I found that people's food memories were what was the easiest for them to maintain after migrating to the US. I think it is as important to a person's cultural identity as art or religion," says Norris.

Asia Society spoke with Norris about her cookbook, the pickling process, and her thoughts on Asian pickles.

How did you become interested in the history and culture of pickles?

I began researching pickle history, mainly related to Lower East Side Eastern European traditions, for the New York Food Museum's First Annual Pickle Day back in September 2001. Historian Suzanne Wasserman at CUNY (City University of New York) had found a dearth of archival information available in public records and the board realized it was ripe for us to kick off a major research effort. I was looking for a focused internship project that I could work on for a few months. I had already had some experience in interviewing my own family for other oral history projects for school and loved it, and so I offered to create a broad network of oral history interviews to gather New York pickle history in the form of oral history research. I had no idea at the time that I would spend the next three years studying world pickling traditions.

You go into further detail in your book, but can you explain briefly how a basic pickling process works?

Pickling is just one method of food preservation. There are two basic pickling methods: Foods preserved with salt and foods preserved with a wet acid solution or acid brined (vinegar or citrus juice). Pickling is a preservation process that occurs when fresh raw food is introduced into a moderately acidic liquid or brine which denatures fresh foods to the extent that it is no longer raw - but not necessarily cooked - halting spoilage temporarily. The acidity in vinegars and citrus juices, or those produced naturally by fermentation, is what “pickles” a food.

What sorts of stories did you come across when researching about Asian pickles?

Since many of the contributors of the Asian recipes were given to me by folks who now live in the US, many of the recipes were linked to people, places, and events that are "preserved" in their memory but are no longer. I was careful with some of these stories because they are both bitter and sweet. In many cases the recipes had already been adapted to American kitchens because of access to ingredients (i.e. such as the tiny green carabou mango pickle in a Filipino recipes, which is almost impossible to find here in NY). But the memory of home lives on and in order to "preserve the memory of home" the recipe has to be made in some form or fashion. In many circumstances, I found that people's food memories were what was the easiest for them to maintain after migrating to the US. I think it is as important to a person's cultural identity as art or religion.

Why has pickling been popular in Asian cultures?

Since pickling is such an old form of food preservation, there are many old myths surrounding pickles and pickle making. I also think that Asian pickles can encompass a whole range of tastes- hot, sour, salty, and sweet. So people all over Asia just love the taste and texture of their favorite kinds.

What have you found are some of the major differences between Asian pickles and American pickles?

It is mainly the key ingredients and spices. Everyone seems to agree that the cucumber is a great pickling vegetable but as far as bitter green fruits and vegetables, I think Asians on the whole (this is a very general statement I realize) are more interested in working with bitter foods to make them more palatable. But then, I was born in Texas and I love bitter greens!

It is mainly the use of oils and spices. I think this can even be broken down further to separate regional styles. For instance, Indian pickles from Andarah Pradesh are different than from the ones from Bihari or Bengal. Spices used in Canton differ from those used in Szechuan. So are the differences in pickles. Plus, it's all up to the person making them. If someone doesn't like spicy foods, they will leave out the chili pepper. But that doesn't mean it is inauthentic.

What are some of your favorite Asian pickles and where do you go shopping for them?

Here in New York I like to buy my pickles from Kalustyan's because they have a good variety of both South Asian and Middle Eastern pickles- both freshly made at the store or imported. Otherwise, I have bought Chinese pickles from China Food Imports, which is on Grand Street. I sometimes buy Japanese pickles at the Sunrise Market near New York University.

In your research have you found any health risks related to pickled foods? For instance I have heard there is a high incidence of stomach cancer in Japan and Korea and it is thought that it might be linked to diet. But is this more related to the spices?

Yes, I have read many scientific studies regarding the health risks and benefits involved with eating too many pickles. As I say in the book, unless a person has a serious health concern about eating too much salt and sugary foods, everyone should enjoy pickles in moderation.

When reading your book you soon realize how many variations of food can get pickled. Was their any food that you were surprised to find in a pickle recipe?

Duck tongues were the most surprising to me. But as I read more history and tasted more varieties, I realize that offal and other leftover meat cuts made excellent pickles.

There is a rich history of pickles in the Lower East side of New York City. There is even a "Pickle Day" celebration every year in that neighborhood. Can you explain briefly some of that history? Have you found other communities in the United States or internationally with a long history and celebration of the pickle?

Up to now, most of the exhibit panels for this celebration can be found in my book. We are looking to revamp the exhibit information by reaching out again to our fellow New Yorkers' stories. We are also interested in collecting pickling vessels to put on display. If anyone has access to heirloom kimchi pots, or old pickle presses, or earthenware or stone vases, please contact me.

In my book, I also list other American and Canadian pickle festivals that occur annually. There is a rather larger international pickle festival in Rosendale, New York before thanksgiving. About two years ago they hosted some Japanese pickle makers and it was a great success. Last year, the New York Food Museum allied with a Korean kimchi maker and they had a super-sized kimchi booth. People were lined up for yards to get a free sample of Korea's national pickle.