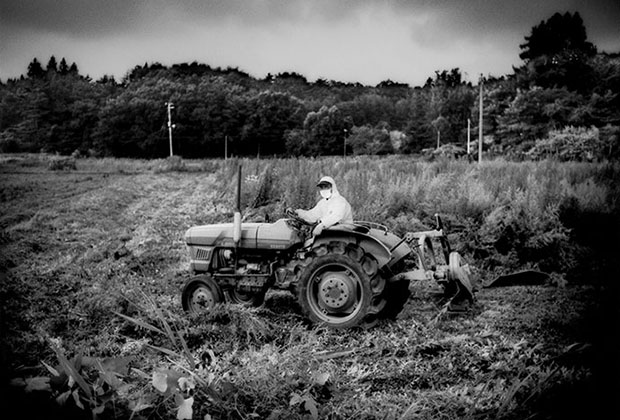 A farmer tries to plough soil irradiated after the Fukushima Daiichi Nuclear Power Plant disaster in 2011. Today, his fields have been converted to a 30-year dumpsite for radioactive soil. (James Whitlow Delano)

After the Tohoku earthquake spawned a tsunami which tore through northeastern Japan on March 11, 2011, photographer James Whitlow Delano used his Leica camera to document ubiquitous scenes of devastation and destruction.

On March 8, 9/11 survivors who participate in outreach programs with victims of Japan's tsunami spoke about their common bond.Learn more

Five years later, many have moved on — but the Tokyo-based Delano revisited the same places, unsure of what he would find. His photographs are a stark reminder of one of the worst tsunamis in recorded history.

On this anniversary, Japan is slowly rebuilding, and an optimistic feeling of permanence has started to take hold. To see the changes from 2011, use the slider in the below images to see how the landscape has changed.

In March 2011, an elderly woman shuffles along a road at the edge of Rikuzen-Takata, Iwate Prefecture, a city almost wiped out by a tsunami arriving 30 minutes after the largest earthquake in Japan's recorded history. Five years later, a ruined apartment building still stands, at left. Four of the five floors were completely inundated. Rock has been blasted from the mountains on the horizon and transported to raise the city nearly 150 feet — a megaproject to make it safer for inhabitants to return.

Near Minami Soma, Fukushima Prefecture: A barrier demarcating the 12-mile, nuclear, no-entry zone in 2011 was overgrown with vines six months after the earthquake and tsunami. Five years later, residents have returned to their homes — yet thousands of black sacks filled with irradiated soil like those seen on the left side of the frame are still present.

An individual walks along the streest of Rikuzen-Takata in the aftermath of the tsunami about just over a mile from the sea, where debris reaches the rooftops. The rest of the city was completely leveled, and about 5,000 of the city's houses were submerged by the tsunami. Five years later, only the road and the mountains are recognizable. The debris has been cleared and the ground level raised another 50 feet. The mounds on the left and far right line up fairly closely with the rooftops in the photos from 2011.

Ofunato: In 2011, a tug boat, homes, and debris were tossed about by the flood waters caused by the tsunami and came to rest high above the harbor, which is more than 1 kilometer away. The cherry tree in the middle of the photograph bloomed the following spring. Five years later, both trees have been removed, the houses nearby have been repaired, and the riverside is devoid of any vegetation at all.

Toni, Iwate Prefecture: The tsunami wall was not enough to hold back the wave that hit these homes. Even the homes high on the hill (in the top left) were damaged up to the second floor. Five years later, the tsunami wall and harbor repairs continue.