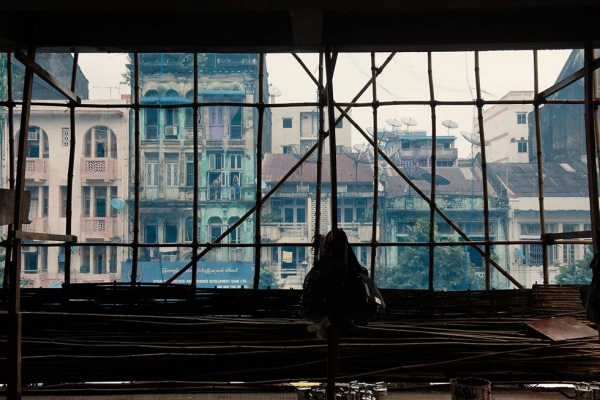 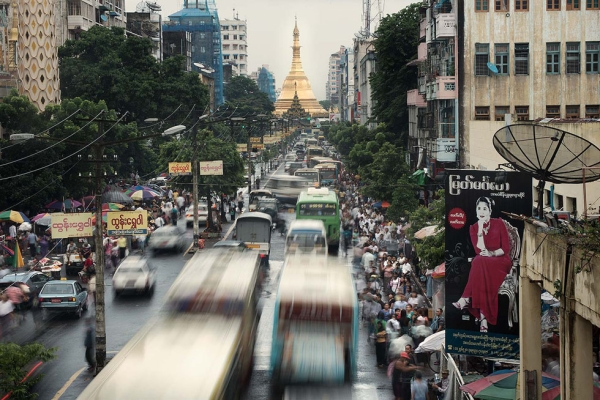 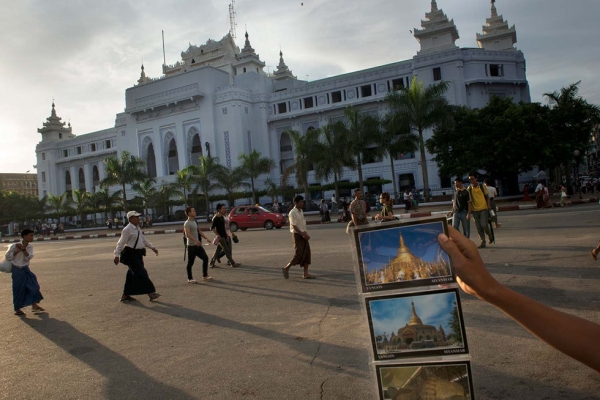 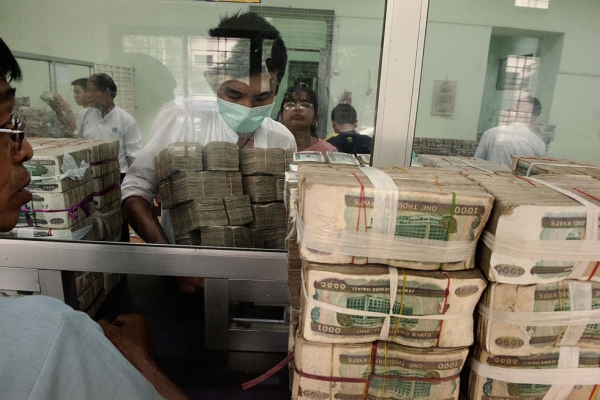 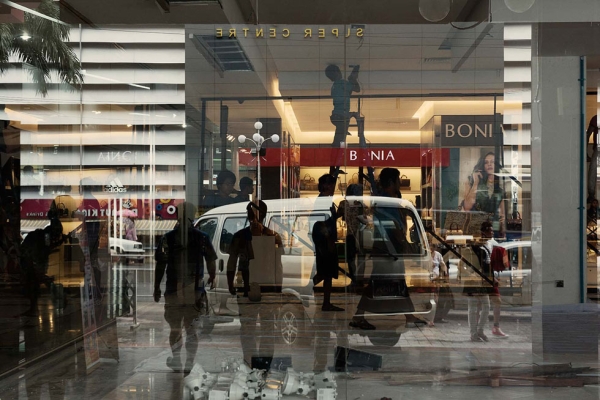 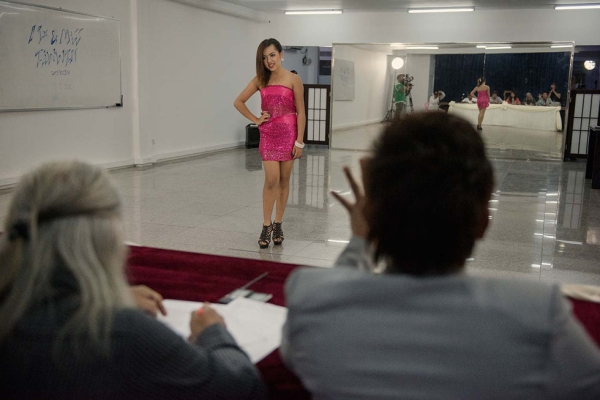 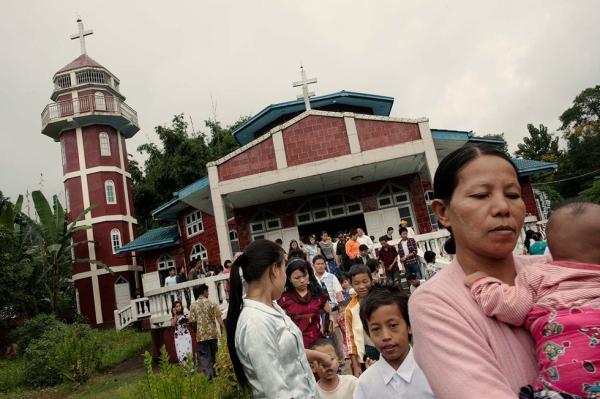 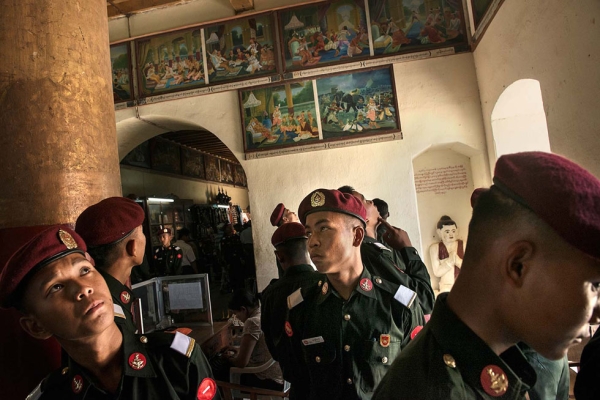 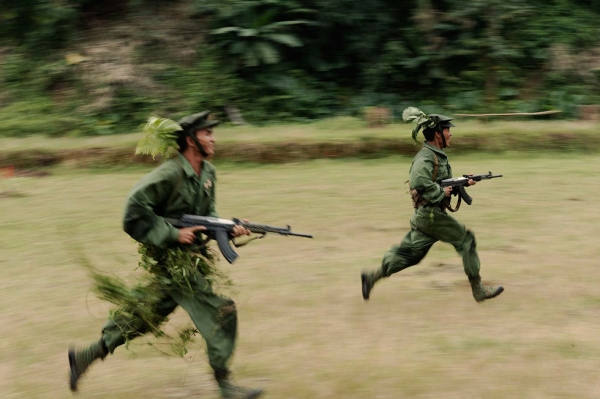 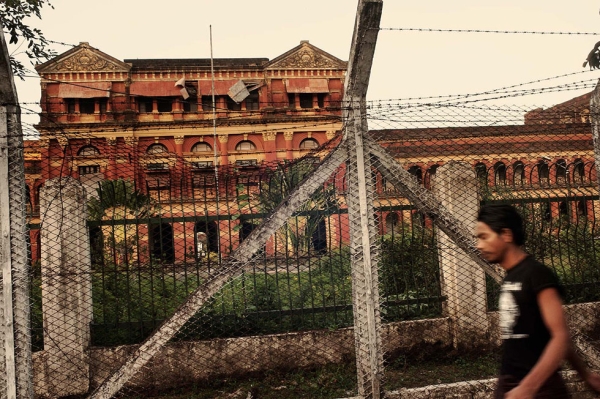 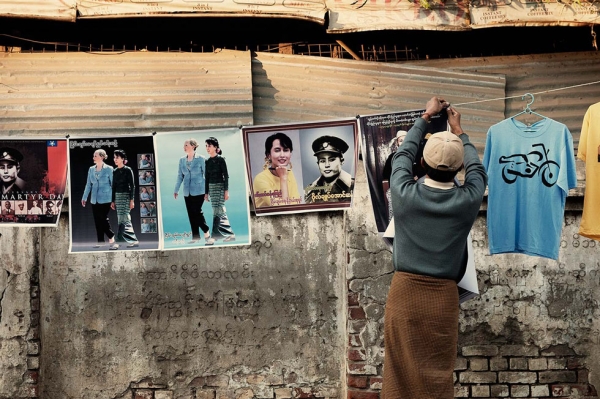 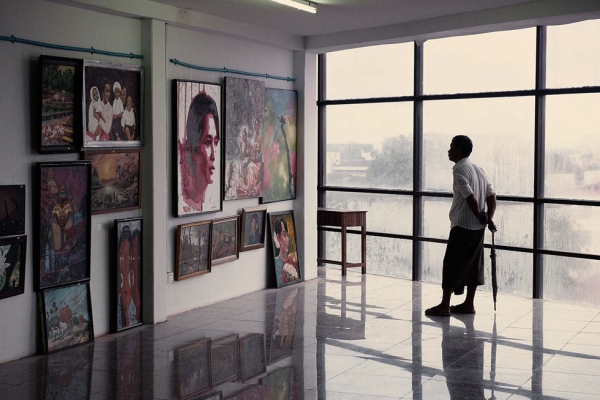 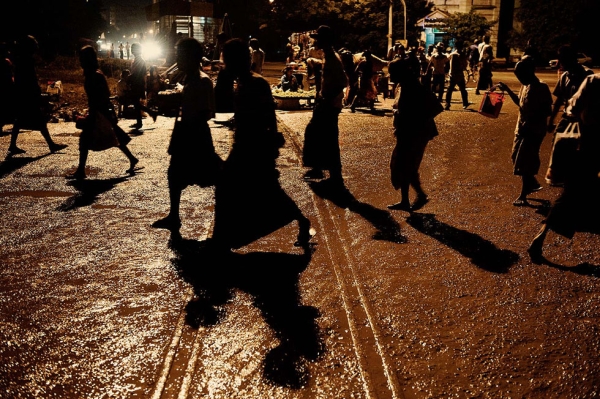 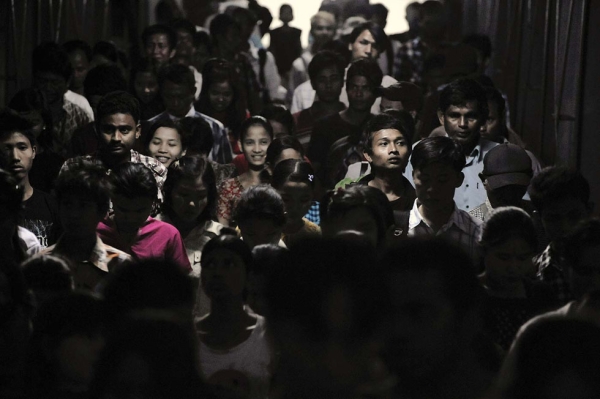 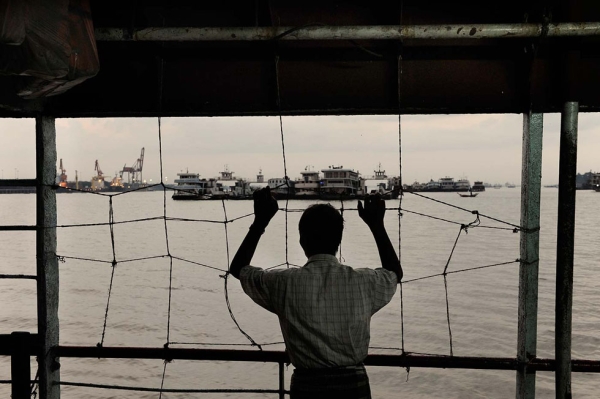 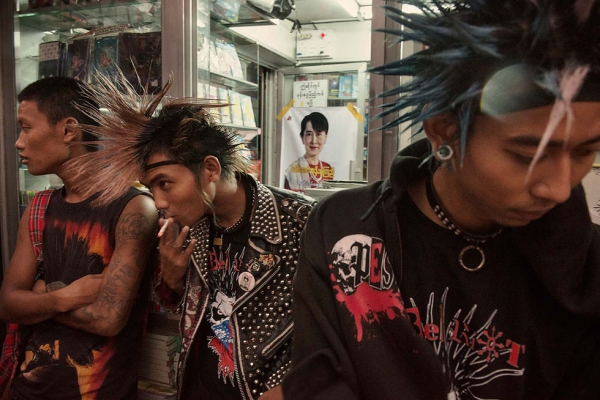 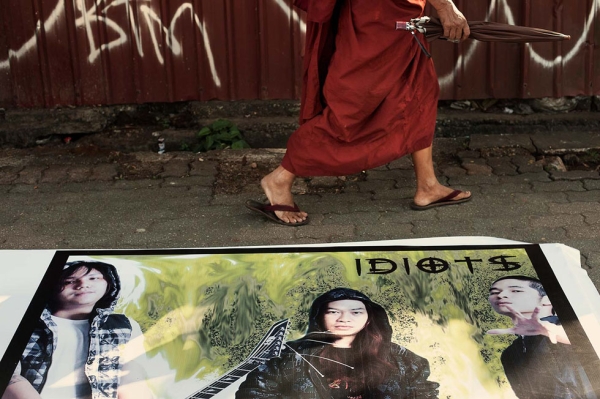 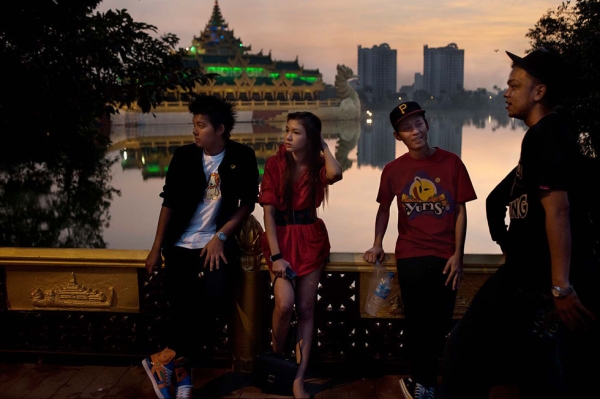 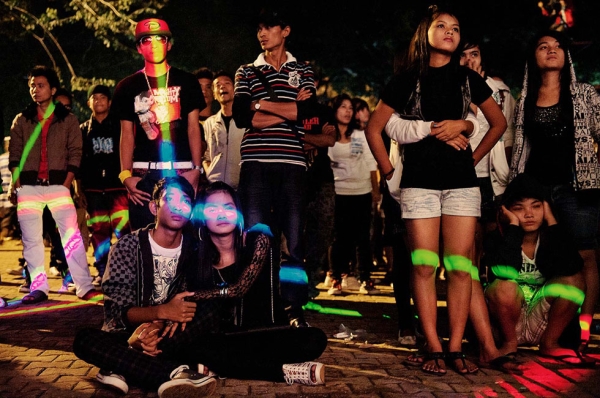 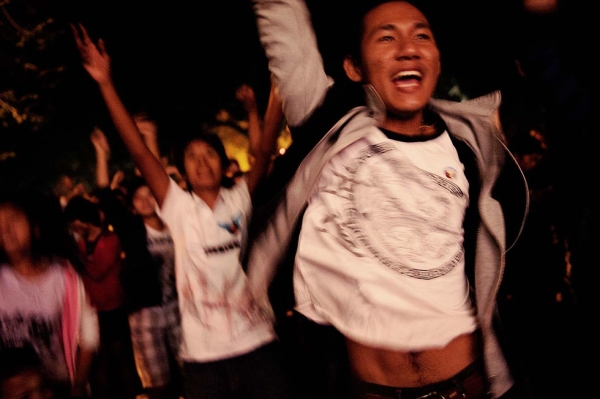 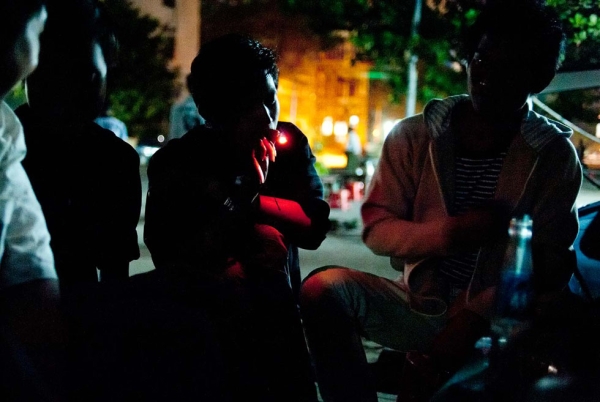 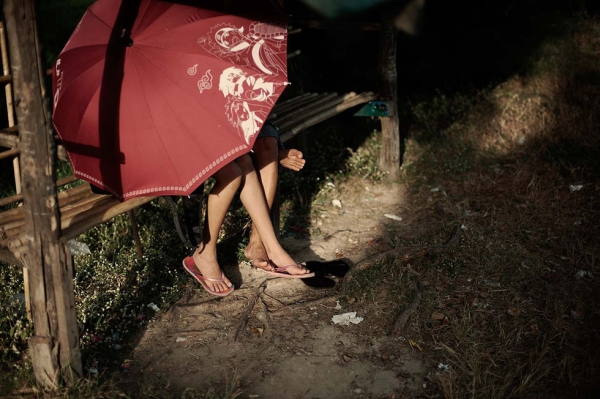 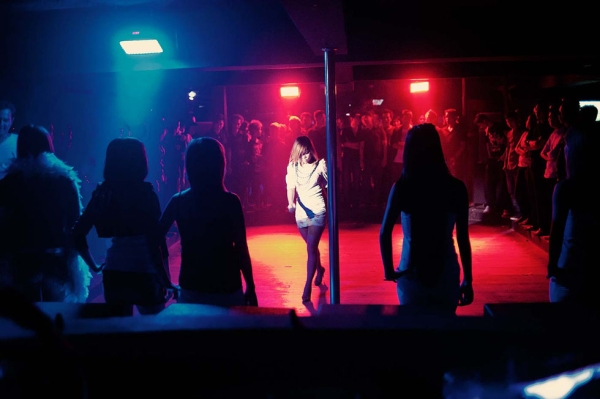 French photographer Gilles Sabrié has an eye for the telling detail. His photographs tell stories of social change, whether during life's quieter moments and bygone eras or tumultuous reform as history writes itself. As the photo editor for ChinaFile, a new online magazine from Asia Society's Center on U.S.-China Relations, I have had the pleasure of working with Sabrié on a few of his stories. During President Barack Obama's recent visit to Myanmar, I asked Beijing-based Sabrié to share with the readers of this blog some of his images and experiences from his travels to this emerging democracy. I have condensed and edited his writing to maintain clarity here.

My first trip was just a few kilometers over the Chinese border to Kachin State.

One of the first questions I was asked by my host, an officer of the Kachin Independence Army (K.I.A.) was, “Have you been to Burma before?”

“No, this is my first time,” I replied candidly.

To which I was told with a faint smile, “This is not Burma, but Kachin land."

The atmosphere, in Laiza, this border town where the K.I.A. has set up its headquarters, was filled with tension. A deadline for the K.I.A. to disarm had expired a couple of months before, and everybody was preparing for war. In a training exercise, dozens of new recruits in green fatigues were pretending to fire their rifles, shouting “Paw-paw-paw!” in a poor imitation of what could have been the sound of real bullets. What I learned in this remote land, rich with jade, gold, timber and hydropower, is that Myanmar is hardly a unified country, and that the ethnic issue remains one of the biggest challenges to the ongoing democratization process. One month later, Aung San Suu Kyi would be released from her decade-long house arrest, and a year later war would break out, with 75,000 Kachin refugees feeling its acute effects.

My second trip a few months later was to the economic center, Yangon, a decrepit and fascinating city unlike any I had visited in Southeast Asia. I felt I had gone back in time. Downtown, grand colonial buildings, witnesses to the time when this city was the richest of the [British] Empire, were left abandoned and decaying. At times, power cuts would plunge the city into darkness. A few Japanese cars jostled in the potholed city streets with ramshackle buses that still bore their faded ideograms from the foreign country that cast them off. Neither the newly “elected” civilian government, a creation of the junta, nor the recent release of Suu Kyi, whose name could still only be whispered, had yet to have an impact. Informers where everywhere, so we were told, and I could spot a few, camera in hand.

I was there documenting the thriving music scene, a rare space of freedom where the youth was seeking escape from a suffocating environment. “We hate the government, but they have guns, we don’t. There is nothing we can do,” said a young rapper whose day job as radio host barely made him a living. He was running a travel radio programme, telling his audience about faraway places he only knew about from surfing on the slow and restricted internet. For whatever reason, his dream city was Vienna. For the time being, his only possible escape was music and weed.

I came this last time to document the change. What were the most visible signs that the country was embarked on a historic, peaceful democratization process? What had changed for my friends? On the streets a few obvious signs pointed to the shift. The graceful smiling face of Suu Kyi was ubiquitous, on posters, T-shirts, teacups, key holders, and paintings of newly opened art galleries. Cell phones, hardly seen a year before, were everywhere. Bamboo scaffoldings were now wrapping many of the decaying colonial buildings. Car dealerships filled with shiny Japanese four-wheels had mushroomed, and so had the city traffic. Customers were battling with newly installed ATMs, unsure of how they worked. On street walls, graffiti played with the mold. At the N.L.D. headquarters, the atmosphere was still electric a couple of months after the elections. Suu Kyi had just come back from a triumphal visit to the United Kingdom, and young militants were busy registering new members whose applications were piling up on their improvised desk. I expected some enthusiasm and optimism for the turn the country was taking. I was surprised by people's subdued reactions. "What has changed?" "Not much, still the same people running things."

The concerns of my friends, the musicians, were still the same: finding a job, getting an apartment that would allow them to get married to their girlfriend. Their songs still filled with rage and craving for escape. If not better, some things had gotten worse: with reform came a frenzy of real estate speculation. Apartment ownership or even rental is now further beyond the means of the average Burmese. Economic reforms had not yet translated into growth, and job prospects were few. Suu Kyi calls youth unemployment a "time bomb." I started to realize that the immediate beneficiaries of the country’s change were the former generals and their business allies, whose bold moves had gained them a sudden respectability and the ability to extend their business deals to new partners. My stubborn questioning on what had changed eventually got me to the obvious: "We are not afraid to talk anymore."

The fear is gone. Now, as a photographer, how could I possibly capture that?