In the Philippines, Hearing Music as a Key Step on Path Toward Peace | Asia Society Skip to main content

In the Philippines, Hearing Music as a Key Step on Path Toward Peace 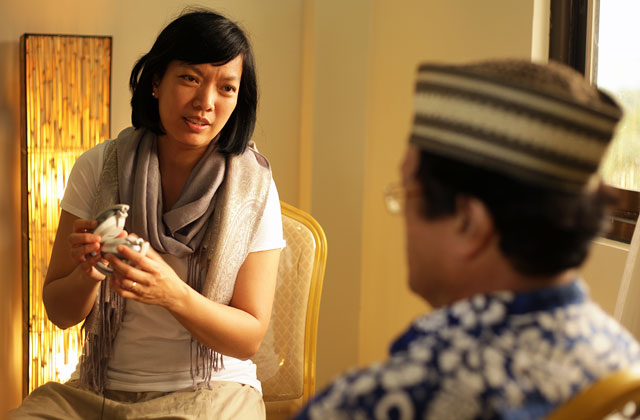 Composer and musician Susie Ibarra, shown here in "The Cotabato Sessions," travels throughout the Philippines recording indigenous musicians in an effort to preserve and promote a cultural heritage. (Joel Quizon)

New Yorkers have a unique opportunity to immerse themselves in the culture of the Philippines tonight when Asia Society and the Asian American International Film Festival co-present a multifaceted look at the indigenous art form known as kulintang (rhythmic gong ensemble music) in both traditional and contemporary forms. With roots predating the influences of Islam, Christianity or the West on the Philippines, kulintang has a unique history of crossing Philippine indigenous matriarchal society and Muslim cultures. It is particularly associated with Mindanao, the southernmost major island in the Philippines, home to a significant Muslim population, that has in recent decades also been the site of political and ethnic strife.

Asia Society's program begins with the documentary The Cotabato Sessions, which focuses on a respected elder within the kulintang tradition, National Heritage artist Danongan Kalanduyan. Following the screening, Kalunduyan himself appears on the Asia Society stage, accompanied by dancers from the the Palabuniyan Kulintang Ensemble. Susie Ibarra and Roberto Rodriguez then offer their updated experimental take on kulintang, after which a Q & A session will bring together Kalanduyan, Ibarra, and Joel Quizon and Maya Santos, the director and cinematographer, respectively, of The Cotabato Sessions.

Susie Ibarra is also one of the key creative personnel behind The Cotabato Sessions, making her a sort of triple threat in Asia Society’s program. In addition to being a percussionist and composer, Ibarra is an Asia Society Asia 21 Young Leader, a member of the music faculty at Bennington College, and co-founder, with Roberto Rodriguez, of Song of the Bird King, a music company that creates multimedia events centered on her interest in indigenous music and ecology.

Ahead of tonight’s program, Ibarra offered Asia Society a few thoughts on her engagement with kulintang — and her conviction that the values in traditional music, and indigenous culture overall, can bring people together.

Kulintang music and the indigenous music in Mindanao has been a great inspiration to me in my creative practice as a percussionist and composer. I think it has been two-and-a-half decades of keeping close to the music and culture since I was first introduced by my Tita and Tito [adult family friends] as a teenager. I am also especially sentimental because the Kalanduyans and Maguindanaons were the first Filipino musicians I began field recording for my preservation work, which inspired me to meet and work with other tribes in the Philippines, from the north to the south. Their performing arts derive from Philippine court music and some of their masters have the virtuosity to play from 10 to 30 variations on one style of music. It is beautiful and also rhythmically very powerful.

It was during that time, in 2004, that I realized I would like to help indigenous artists and communities have a more sustainable life. I'd like to make a difference in the economic, civil, environmental, and human rights issues that have affected these communities. This dialogue would stem from music and the performing arts. I'd like to help make a difference in both sharing these beautiful art forms and continuing their traditions. There are so many valuable practices and mysteries regarding why people have been playing and dancing these art forms for hundreds and, in some cases, thousands of years. What would our world be like if we didn't have them anymore?

In Mindanao it's been an ongoing struggle for peace. We are all very excited about the peace treaty signed in March by the Christian government and Muslim community leaders. Moving forward, I am supporting cultural preservation and peace initiatives with Song of the Bird King, the digital music company that I co-founded. I am collaborating with the Heavenly Culture, World Peace organization, who helped broker the treaty, to move forward peace initiatives and construct case studies with Muslim tribes in Mindanao. I am also building a sister city project between Bennington and Tagum, a known music capital with many neighboring indigenous tribes, which will create a new performing arts biennial in Tagum that crosses indigenous and contemporary art forms and engages with its surrounding ecology.