Partnership Is the New Alliance: Why U.S.-Singapore Relations Should Be a Model for the U.S. in Asia | Asia Society Skip to main content

Partnership Is the New Alliance: Why U.S.-Singapore Relations Should Be a Model for the U.S. in Asia 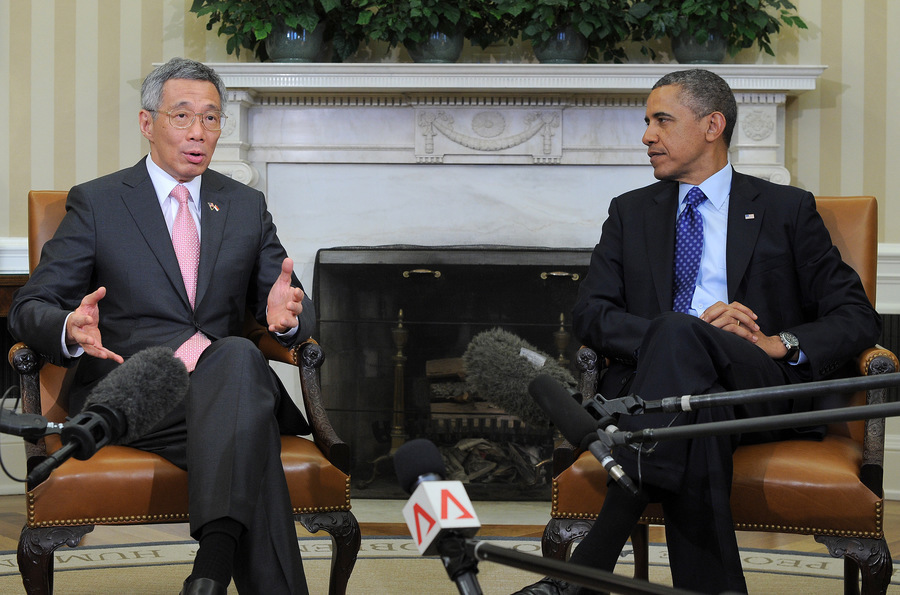 This post is adapted from the author’s chapter, “The Singapore-U.S. Strategic Partnership: The Global City and the Global Superpower,” in the National Bureau of Asian Research publication Strategic Asia 2014–15: U.S. Alliances and Partnerships at the Center of Global Power. This annual volume will be released Tuesday, December 2, 2014 in Washington. The views expressed here are those of the author and do not reflect the views of the Asia Society Policy Institute.

The fine art of treaty negotiation may well be lost to history. In Washington, gridlock encourages executive action over international agreement. In Asia, emerging powers pursue strategic autonomy, informed by history, long-standing national policy, and often an interest in positive relations with both the United States and China.

While U.S. alliances remain the cornerstone of U.S. engagement in Asia, they are creations of the Cold War. The budding relationships that offer the biggest potential gains for the United States — for example, with India, Indonesia, and Vietnam — are all political cultures centered on non-alignment, and unlikely to commit to similar treaty alliances.

It will be a trick at times for Washington — conditioned by the Cold War and the global war on terror to the habits of a “with us or against us” world — to adapt to this new reality. But this is not unexplored territory, as it’s been done before, and well, with Singapore.

Although Washington and Singapore have never become treaty allies, they have stretched the definition of “partnership.” In the public statement following their 2013 Oval Office meeting, President Barack Obama thanked Prime Minister Lee Hsien Loong for “extremely close military cooperation…and [the facilities] that allow us to maintain our effective Pacific presence,” an economic partnership that helps create U.S. jobs, and “the advice and good counsel of Singapore” as the United States pivots to Asia.

U.S. policy makers should draw five lessons from the U.S.-Singapore relationship and what it means for the U.S.’s relations with other Asian countries.

First, there was nothing inevitable about the partnership that has developed. In October 1967, then-Prime Minister Lee Kuan Yew made his first official visit to the United States. For Singapore, positive relations with the United States were then a matter of “survival,” as Lee put it to Vice President Hubert Humphrey. Fears of Communist expansion were rising in Southeast Asia, but U.S. credibility as a partner was suspect and Lee judged U.S.-Singapore relations to be “superficial.” A long-term commitment and perspective was necessary, and both sides delivered these over decades.

Second, the U.S.-Singapore partnership, at its foundation, relies on Singapore’s assessment that the United States will be “preeminent in setting the rules of the game” for decades. Prime Minister Lee has publicly resisted the declinist argument, often concluding, as he told Politico, that the United States is a “very resilient country and it has tremendous energy and creativity and drive, and it’s going to bounce back” from recession and political gridlock.

Third, it follows that, in the post–Cold War world of what scholar John Ikenberry describes as U.S. “power, but not authority,” U.S. success depends on the United States’ economic vitality and its attractiveness as a society. This means that the U.S. commitment to Asia is likely to be more complex substantively and more demanding politically, but less expensive to the U.S. Treasury, than a defense-focused analysis might imply. Today, U.S. credibility in Asia grows as the United States establishes defense agreements for joint training, new deployments, and cost-sharing with partners like Singapore, but also as it develops economic ties that advance shared prosperity, facilitates easy travel between the United States and Asia, enforces norms and practices developed in response to global challenges like illicit trafficking, drives innovation, and develops with its partners shared values and common visions for the future.

Fourth, despite its strong commitment to and optimistic outlook on U.S. power, Singapore’s relationship with Washington is not its only foreign policy imperative. Singapore’s economic and security requirements for positive relations with both the United States and China lead it to urge the two powers to accommodate each other. Its pursuit of positive relations with both Washington and Beijing are seen not as conflicting but as complementary. There is no choice for Singapore between China and the West, for a rupture with either would be deeply challenging to Singapore’s interests.

Finally, the U.S. partnership with Singapore shows that a strategy that builds as many and as varied connections to Asia as possible, using all the tools of American international engagement, is the strategy most likely to create advantages for the United States over time. The long, hard work of deepening partnerships across many elements of a relationship is the only sustainable way for a country to maintain its place at the center of the web. Indeed, engagement across defense, diplomatic, and trade dimensions differentiates the U.S.-Singapore partnership from Singapore’s significant but less robust partnerships with other Asia-Pacific powers.

In the end, in assessing U.S. intentions, Asia will look as much at the Trans-Pacific Partnership trade negotiations as at the Seventh Fleet. Managing this reality is no easy task. U.S. politics and U.S. government bureaucratics incentivize defense-focused solutions to challenges abroad, given the strong implementation and strategy-development capacity of, political support for, and resource allocations to the U.S. military. Support for trade and diplomatic initiatives is more limited and politically fraught.

In partnership, the United States and Singapore are two of the most influential nodes in an increasingly complex web of Asian economic, political, cultural, and security relations. Treaty commitments are the constant, robust foundation for the United States’ engagement, but America’s success in building partnerships on the U.S.-Singapore model will determine whether U.S. engagement in Asia flourishes in the 21st century.