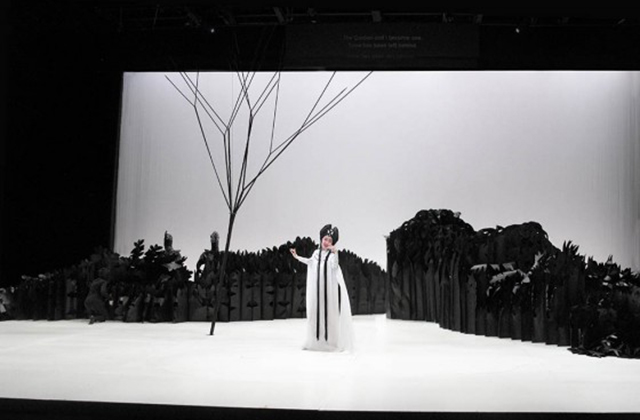 Soprano opera singer Qian Yi in front of the unique and intricate set of 'Paradise Interrupted' which is partially made of paper. (Lincoln Center Festival/Lihe Xiao)

You may not know her name, but you have probably seen the work of Jennifer Wen Ma. The director, visual designer and librettist was a creative mind behind one of the biggest performances ever put on by China, on one of the biggest global stages: the 2008 Beijing Summer Olympics opening ceremonies. Ma was one of seven members on the core creative team for the jaw-dropping spectacle that explored China’s historic and modern achievements and contributions to the international community. Her newest piece of original work — the hybrid opera-art-installation 'Paradise Interrupted'  — brings her unique philosophy of "extending tradition into contemporary discourse" to the stage. The results, however, are anything but old-fashioned.

Along the way, Ma found a musical counterpart in Huang Ruo, the composer and one of the librettists for Paradise Interrupted whose long list of achievements include projects that bridged together unlikely elements, techniques, and music to create new and totally unique compositions.

You said in one of your director’s notes that a core philosophy for you is “extending traditions into a contemporary discourse.” Is this a general philosophy? Where did this desire to fuse the traditional with the modern come from?

Jennifer Wen Ma: It probably came from my time spent working on the [Beijing Summer] Olympic opening ceremonies. I honestly did not have much of a profound appreciation for the classical before that — not just practices, but also philosophy. Back then, I was more bright-eyed and bushy-tailed, looking to the future. But during that project we spent 10 months in the initial brainstorming process in Beijing discussing the merits of Chinese culture and civilization: what contributions we made to humanity, to world civilization. Examining those things and that process, in hindsight, was really quite profound and influential to me because it made me realize there were some really amazing things in the past that were brand new to me. It made me think about ways to incorporate those traditions in new things. Maybe it’s not in every single project, but philosophically, it’s definitely a part of my thinking now.

Were there challenges in trying to bring the traditions of kunqu opera — one of China's oldest and most prominent forms of opera —  into the modern world?

My interest in theater has been long standing with Chinese opera. First I was interested in it purely out of curiosity, because it seemed so different than contemporary modes of performances and performance art. It’s very codified. It’s a very complete system in itself. In a way, opera aficionados consider it a dying art because the level of performance that is done now compared to the level of appreciation from the fans doesn’t match-up — the heyday is already gone. But the art form itself is so pure. It’s been honed by generations of great artists. It has a very deep history. This is how my general interest in opera was formed — it’s very symbolic — every gesture, every move, every set piece. It’s not only what you see, but all the things behind it, I found that very interesting.

My specific experience with kun opera was because in 2012 I did an installation at the Ullens Center of Contemporary Art (UCCA) in Beijing. It was a hanging garden that was 60 feet long and hanging 20 feet in the air. It had an upside down component, and it cast shadows and it made a reflection that looked like a 3D rorschach drawing. I suggested doing a kun opera performance in this space — this unusual, surreal space — and decided to do this dream sequence from Peony Pavilion. The dream sequence happens in the garden — which could be black, or upside down. The installation had that surreal quality of a dream. And that was a beautiful performance, but because this is a contemporary piece, during the rehearsal period, when I was asking the performer to be a little more loose the performer said “no.” Like I said, kun is very codified, complex, and rigid. It’s all “how many steps here”— every gesture — they have to do it as their teacher told them. “It’s perfect, I cannot change anything about it,” the performer said. So when you hear that, for me, because art is about creating and about innovation, I still wanted to see what can be done.

When I met [Paradise Interrupted soprano] Qian Yi I found a great partner in that. She is so well-trained, she’s at the top of her game, but she’s also experimented a lot with different kinds of voices, singing performances, and styles. She’s so open, but she maintains the core and essence of kun. I want to work with someone who can get to the essence and not get bogged down by the external rigid rules. And that takes a really great artist to go through that journey with you.

The idea of "paradise" and "the garden" are so different between the dream in Peony Pavilion and the Garden of Eden. Yet many elements within each tale tie them together. What lead you to this theme? Describe the connection you saw between the two.

I was really looking into the idea of paradise — that’s really what I was thinking of. I had this idea of this woman who has experienced something before. She’s not a virgin, in the sense that she has experienced life in its most idealized form. So I think Peony Pavilion's dream sequence involved that particular character. At the same time, I was thinking about the [previous] project in Beijing, which had me thinking about the Hanging Gardens of Babylon, something with a lot of myths and mythology attached to it. This led me to look for the location of the Garden of Eden and all the myths and fables and pseudo-archaeological hypotheses about where the garden was.

At that point I realized that the two different sets of research I was doing at the time could be tied together in this performance. So the more universal idea of this utopian landscape we’re looking for, and how paradise from its original word means “walled inclosure." Something I realized is that it’s always inner or outer, inclusive and exclusive, and humans have been trying to break through — either getting out of a garden or getting back into it. I just thought there were so many interesting parallels, I wanted to place this character not necessarily in a location that’s a set, but more of a psychological landscape, exploring. Having multiple references, I really like that there’s not a specificity to a location and that it could have a more universal resonance with audiences across different cultures.

Why the decision to use multi-media — particularly the paper garden, but also the video, lighting, etc.? How did these elements interacting enhance the storytelling? Was there a specific inspiration that brought all those elements together?

It extends from Chinese opera. One amazing thing about the opera tradition is that the stage is often very empty. Props are maybe a table and two chairs because it’s traditionally performed by a traveling troupe and they didn’t want to put too much into it. Everything is done through symbolic singing, gestures, choreography, the libretto, how the music is played, and the performer. I really love the idea that on the empty stage, symbolically, things are gestured. But, being a visual artist, I also love the idea of having a very full visual experience, not merely suggested through one gesture or a line.

I wanted to do it so that a set could come and go very easily. Have something that has full physical presence, visual imagery, but then could go away easily so that you're not burdened by it. So projection lends itself to that — you turn it off, nothing’s there, and you have a blank canvas again or you have a world that can come out. Rather than having a traditional backdrop, I wanted to create something that still had a physical presence, which took me on a long journey to figure out how to use cut paper and assemble it into a very small piece that is folded on the side like a pop-up book. When you open it, it becomes a huge presence that isn’t just a painted prop. You can interact with it and you can walk around and immerse yourself with its presence. But then it could disappear very quickly within 60 seconds. And you have that empty stage again, you have that possibility again to do anything you want.

When you first heard of the concept of Jennifer’s Paradise piece, which visually, is a departure from the traditions of kun opera, did you immediately feel you understood how to portray the piece sonically? What was your approach?

Huang Ruo: When I first learned about the concept of Paradise Interrupted, I immediately felt that it was going to be a very special, unique and meaningful project. The show not only brings together music, visual arts, singing and choreography, but it also transforms an ancient art form from China and integrates into a new operatic art form of today, to create something totally new on top of that. For me, this was my main focus and approach and the main drawing point for the composition. At the same time, we are prolonging the tradition of kun opera, while also creating something new. Then, we are also able to bring in an international audience to see it.

Your past projects show you have a talent for bridging together languages, styles, and genres. How did your previous experiences shape Paradise Interrupted?

Every experience in the past helps. But, I also feel that every project I'm doing is new and different and that’s what keeps me going and keeps me inspired to keep creating something new. However, my first opera, Dr. Sun Yat Sen, which premiered at the Santa Fe Opera in 2014, was a good precedent for Paradise Interrupted. With Dr. Sun Yat Sen, I had Western singers singing the opera in the Chinese language and in Paradise Interrupted I also have Western operatic voices singing in Chinese. It has been special to be able to continue creating opera works for the beautiful Mandarin language from my first to my most recent projects. Also, for Dr. Sun Yat Sen we actually also did two events at the Asia Society related to the show before the premiere, like we will with Paradise Interrupted. So it will be great to be back at the Asia Society, this time with a new opera.

Beyond lyrics and themes, you are composing for Chinese and Western instruments. What is the instrumental interplay like, and how did it enhance the piece?

I also want to trace back to Dr. Sun Yat Sen which is my first opera in which I also have several Chinese instruments being part of the orchestra. In Paradise Interrupted, Chinese instruments are more prominent. This concept of bringing instruments from two very different backgrounds and cultures together probably was not meant to be, say, 100 years ago. It used to be hard to imagine that. So now, my challenge has always been to make sure they don’t sound separate, like “this part is East, and this part is West.” I wanted to make sure the two integrate into one. That is my aesthetic and approach. To me, the key is that they are no longer so divided into Eastern and Western instruments. Rather, together they are just a unique orchestra that provides sounds that reflect what our story needs, and to support the voices also combined with traditional kun opera singing and Western operatic singing.