Pakistan's Moment is Near — but Will Anyone Care? | Asia Society Skip to main content

Pakistan's Moment is Near — but Will Anyone Care? 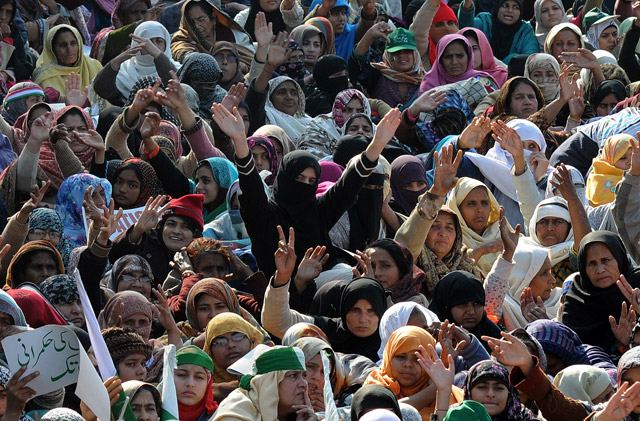 Supporters of Pakistani cleric Tahir-ul Qadri gather at a protest rally in Islamabad after the government ignored his ultimatum to disband parliament on January 15, 2013. (Asif Hassan/AFP/Getty Images)

The lack of excitement is due, in part, to a worsening economic situation and rampant corruption. Today, Pakistan’s Supreme Court ordered the arrest of Prime Minister Raja Pervez Ashraf for fraud related to power plant deals. The previous day, Muhammad Tahirul Qadri, a former elected parliamentarian and an important religious figure who just returned from Canada, led tens of thousands of people in a protest against political corruption in the capital of Islamabad.

Taking control of the reins of government after a long military rule is never easy. Often people expect quick results and don’t fully realize the damage done to both the polity and society by dictators. They dream of jobs, justice and security, but it takes decades — not years — to build foundations of systems that deliver such goals in a progressive fashion. That said, if the transition can happen without any extra constitutional step, elections expected between April to June this year could be an important move toward a more successful Pakistan.

Despite a rocky five-year reign of the current civilian government, there are signs — both symbolic and tangible — of hope. The country’s recent cricket victory against India on Indian grounds brought a reason for cheer to the faces of its distressed populace. Bilateral visa relaxations with India and better regional trade prospects deserve recognition and Western support, though a recent skirmish in the Kashmir zone was an unfortunate reminder of tensions.

Furthermore, Pakistan's "negotiations with the Taliban" are continuing, and some progress is indeed being made in the so-called reconciliation efforts and increased collaboration between Pakistan and Afghanistan. The invisible push from D.C. is finally working. Still, at best one can be cautiously optimistic about an amicably reached final settlement that will bring peace to the region, especially Afghanistan. Manipulating and distorting Islam has become an art for the Taliban, and no one can confidently predict what new slogan will be employed by them after the projected 2014 U.S. exit. Even if the moderate elements among the Taliban are successfully co-opted, it is unlikely the Pakistani Taliban will lay down arms voluntarily and follow their "brothers in arms" across the Pashtun frontier.

Meanwhile, a heartening story is emerging from the Hazara Shia community in Baluchistan. The results of a brutal genocide of their religious community are still playing out, but their peaceful response created a new precedent in the history of nonviolent protests. The Hazara Shia refused to bury the 87 victims of the most recent terrorist attack in Quetta and camped in freezing conditions with the wrapped bodies for over three days demanding justice.

Protesters included small children and women from the families of the victims and their plight touched the hearts of Pakistanis around the country. Within just a few hours thousands of people — rising above any ethnic or political affinities — came out in the streets across the country to show solidarity with these matchless campaigners. All this happened in the midst of a severe threat of terrorism to these processions. This surge of support forced the political leadership to move out of its slumber and dismiss the Baluchistan government. A democratic remedy of this tragedy is no mean feat. The fact that the protesters remained peaceful is an even a brighter signal for the moral health of the society.

Everyday Pakistanis, however, still face troubling violence in their lives due to a rising crime wave in Karachi and continued militancy in the Pak-Afghan tribal belt. Low investment in law enforcement and the rule of law, as well as failure to bring the tribal areas into the mainstream, has not helped security issues. No one in the corridors of power seems to be pushing for the education of the tens of millions of young Pakistanis who face unemployment and frustration. No wonder that Imran Khan, a rising political star, had earlier attracted mammoth crowds across the country challenging the status quo. The tens of thousands now camping on the streets of Islamabad as part of a "long march" under the Tahirul Qadri, are also bracing the cold along with women and children to vent their discontent. Qadri's demands are too ambitious and beyond what the constitution permits, but his supporters' motivations to bring change appear genuine.

These public outpourings have also created fear about the derailment of the train of democracy. An activist judiciary and alarmed military are creating suspicions. That said, it is likely Pakistan will continue to inch towards national elections in coming months and people will speak through their votes. One earnestly hopes that people will take out their rage at feudalism and dynastic politics, the true bane of democracy in the developing world. Manipulating democratic systems in a country with low or poor education standards requires little creativity and even fewer leadership skills.

At the end of the day, it all comes down to the effectiveness of governance models adopted by the state and the quality of leadership. As a remedy of the governance crisis faced by South Asia, teachings from Ali Ibne Abi Talib, the "patron-Saint" of Islam and a great Muslim leader of early times, is relevant. He argued that the best preparation to become a leader is to be in "the service of mankind" and warned that "abandoning equity and justice leads to tyranny and oppression." In Pakistan, it's crucial that future leaders follow this wisdom.

Today in an address and discussion, Foreign Minister Hina Rabbani Khar of Pakistan will answer the most vexing questions facing the U.S. and South Asia. It will be moderated by Joe Klein, political columnist for TIME. Tune in to AsiaSociety.org/Live at 6:30 pm ET for a free live video webcast. Viewers are encouraged to submit questions to moderator@asiasociety.org.