Pakistan: Starlet, Skin and Spies Add Up to Scandal 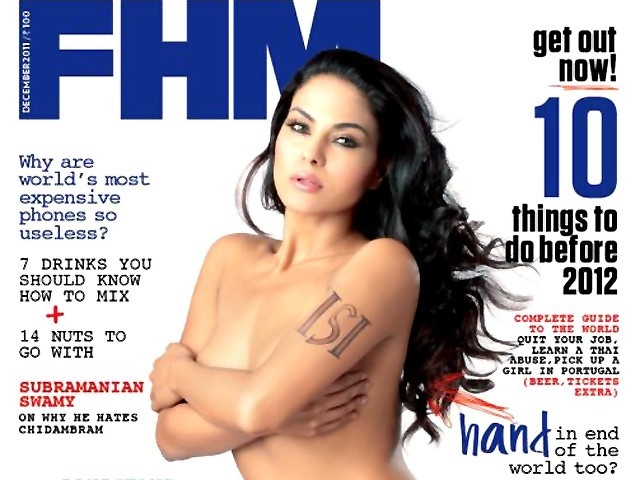 The social media world is all abuzz over a disputed nude image of Pakistani actress Veena Malik on the December 2011 cover of the Indian magazine FHM India.

The cover has caused a sensation in Pakistan both because of the nudity and because the initials of Pakistan's controversial Inter-Services Intelligence spy agency are tattooed on Malik's arm. The reaction in the media is also in part due to perennially troubled relations between the two countries.

The ISI has been in the headlines in recent weeks after senior U.S. official Admiral Mike Mullen, chairman of the Joint Chiefs of Staff, accused it of supporting militants based in Pakistan's tribal areas who target American troops in Aghanistan. Pakistan has denied the allegations.

Malik's PR manager, Sohail Rashid, told the Express Tribune in Pakistan that the actress has done no such photo shoot, adding that she has instructed him to approach their lawyer to deliberate a legal course of action with regard to the matter.

"Veena knows her limits. I know we have done quite bold stuff/shoots, those which are available on our website, but she knows her parameters. Yes, we need to be bold for international magazines, but she won’t cross her limits," Rashid said.

But FHM India's editor Kabir Sharma claimed that the photos had not been doctored, even telling the BBC:

"We have video footage of the shoot as well as emails from Veena about how she's looking forward to the cover."

As Times of India points out Veena Malik has been in the media spotlight before. First when she appeared as a witness to a match fixing scandal, but most notoriously when she appeared on the Indian reality TV show Big Boss in 2010. The appearance followed a fierce debate back in Pakistan with a Muslim cleric who decreed that Malik had displayed "immoral behavior."

FHM India has also been in the news in the past for similar allegations of altering photos. According to reports, Indian actress Kajal Agarwal accused the magazine of modifying her pictures taken at a photo shoot for the September 2011 issue of the magazine.