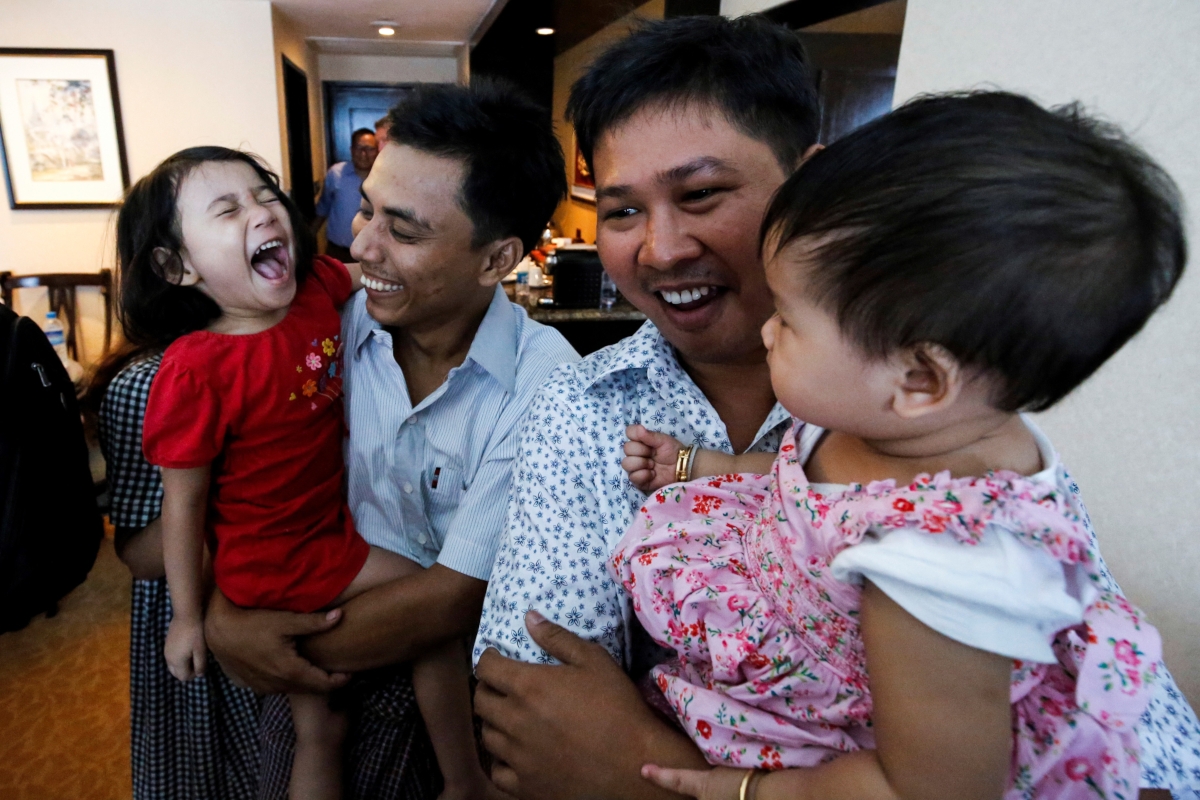 Reuters journalists Wa Lone (R) and Kyaw Soe Oo celebrate with their children after being freed from Insein prison after a presidential amnesty in Yangon on May 7, 2019. (Ann Wang/AFP/Getty Images)

On May 21, Asia Society will present the 2019 Osborn Elliott Prize for Excellence in Journalism in Asia in a lunchtime ceremony in New York. The program will be available via live webcast from 12:30 p.m. New York time.Learn more

When Wa Lone and Kyaw Soe Oo were awarded the 2018 Osborn Elliott Prize for Excellence in Journalism in Asia, they achieved an unhappy distinction: They were the first winners of Asia's most prestigious journalism award to be imprisoned for their work.

As of Tuesday, the two men are now free.

The New York Times reports that the Wa Lone and Kyaw Soe Oo have been released after 511 days in prison, as part of a wider presidential pardon that freed more than 5,000 others.

Wa Lone and Kyaw Soe Oo had authored a series of stories for Reuters on Myanmar's persecution of the Rohingya, a Muslim minority native to Rakhine State along the country's border with Bangladesh. Through careful reporting, the journalists revealed how Myanmar's military subjected the Rohingya to a campaign of displacement, rape, and killing that the United Nations has labeled genocide. The pair were arrested in December 2017 and sentenced last September to seven years in prison as part of a broader crackdown on press freedom overseen by Aung San Suu Kyi, Myanmar's civilian leader. The incarceration of the two journalists attracted international opprobrium and tarnished the legacy of Suu Kyi, a Nobel Peace laureate who has served as Myanmar's de facto leader since 2016. Just weeks ago, an appeal filed by Wa Lone and Kyaw Soe Oo to secure an early release from prison was rejected. 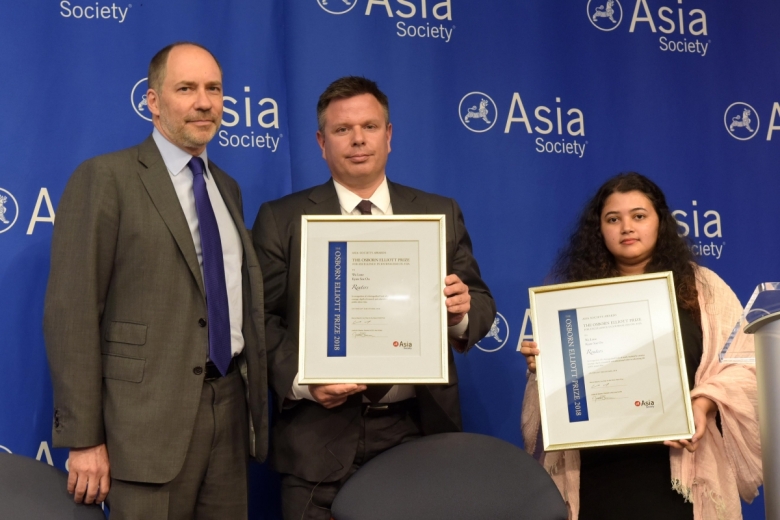 On May 23, 2018, Kevin Krolicki (C) and Shoon Naing (R) accepted the 2018 Oz Elliott Award Prize from jury chair Marcus Brauchli (L) on behalf of their Reuters colleagues Wa Lone and Kyaw Soe Oo, who had been imprisoned for their work. Wa Lone and Kyaw Soe Oo were released on May 7, 2019. (Elsa Ruiz/Asia Society)

Last May, Asia Society welcomed their Rueters colleagues Kevin Krolicki and Shoon Naing, along with Burmese journalist Lawi Weng for a lunch-time ceremony honoring the imprisoned journalists. The group described the challenges faced by reporters in contemporary Myanmar, a country emerging from decades of isolation and stagnation into an uncertain future, and spoke about government efforts to conceal the true nature of atrocities inflicted on the Rohingya. Watch the complete video of last year's Oz Elliott Prize ceremony below: