Orville Schell: Summit an Opportunity for 'Breakthrough' in US-China Relations 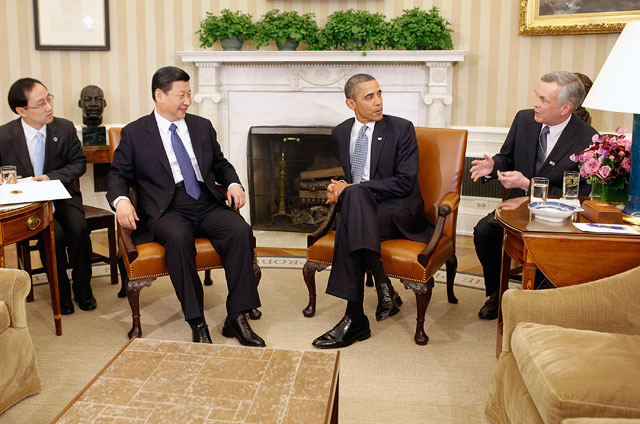 Orville Schell, director of the Center on U.S-China Relations at the Asia Society, makes the case in today's Daily Beast that Chinese president Xi Jinping's first state visit to the United States since taking office in March may be cause for optimism. When Xi and American president Barack Obama convene at the Annenberg Estate in Rancho Mirage, California this weekend, Schell argues, there's potential for a "breakthrough" in bilateral relations that will translate to establishing rapport and greater cooperation.

U.S.-China relations could certainly stand a little Confucian “rectification.” In so many ways, the manner of our interaction has fallen so radically out of sync with the problems that confront us. It is perhaps a recognition of this fact that has helped make so many Americans and Chinese look back on the 1972 Nixon/Kissinger visits with Mao Zedong and Zhou Enlai with such nostalgia. That was the last time the U.S. and China had a breakthrough that truly transformed the nature of our relationship. Ever since, we have been left yearning for our leaders to somehow find a way to again transcend differences, recognize our growing common interests, and begin to collaborate in a new and more active way.

Now, as President Xi returns home from the Caribbean and Latin America, he and President Obama have managed to grab a few informal days together at Walter Annenberg’s former estate, Sunnylands, in Rancho Mirage, Calif. And once again fantasies of a breakthrough are proliferating.

And wouldn’t it be ironic if Obama, who is paralyzed in so many ways back in Washington, ended up finding his Chinese counterpart a more flexible and willing partner than his erstwhile Tea Party and Republican counterparts back in our nation’s capital? It would, indeed, be a strange irony if Xi and Obama left Sunnylands with smiles on their faces, after establishing a new rapport, if not a some general agreement to step up the level of cooperation on such issues as climate change, economic growth, and the need to rein in North Korea’s growing nuclear capacity.