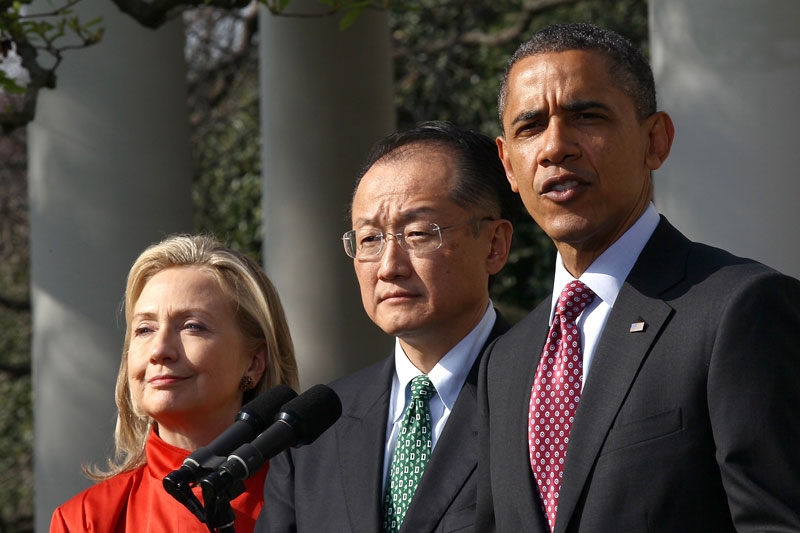 Pundits and reporters expressed surprise at President Barack Obama's nomination Friday of Korean-born Jim Yong Kim for chief of the World Bank. The post, which has been filled predominantly by U.S. financiers and politicians, had some analysts guessing candidates such as U.S. ambassador to the United Nations Susan Rice, former U.S. Treasury secretary Larry Summers, and U.S. Senator John Kerry.

Instead, Obama announced today he was putting up Dartmouth College President Kim in part because of his experience in development and global health, and particularly his work fighting the spread of AIDS and tuberculosis.

Asia Society President Vishakha Desai called the choice a "cause for celebration."

President Obama's decision to put up a Korean-born health and development expert for the World Bank chief job could help quell critics arguing against another U.S. politician or financier in the post.

"A dedicated development professional, Dr. Kim has deep experience in creating partnerships between the developed and the developing worlds to solve intractable health problems," she said. "He would not need to learn on the job as his professional mission and the mission of the World Bank are completely aligned."

The move could also quiet some critics who say the World Bank needs a leader less biased toward U.S. interests, according to Suzanne DiMaggio, Asia Society's Vice President of Global Policy Programs.

"This under-the-radar move should help to quell critics from developing and emerging economies who have been lobbying for a non-American face to lead the Bank," she says. "It also recognizes Asia's ever-growing importance on the world stage."

Developing countries have been calling for more of a voice at the World bank, with Angola, Nigeria, and South Africa putting forward corruption-busting Nigerian Finance Minister Ngozi Okonjo-Iweala. U.S. development economist Jeffrey Sachs was nominated by a number of developing countries. Sachs, who had previously said he would like to end political appointments to the post by the White House, issued a release Friday expressing his support for Kim's nomination.

While the U.S. controls the majority of the votes on the World Bank's executive board, Obama's nomination does not officially put Kim at the head of the bank. The nomination could mean controversy in the months ahead because in comparison to past nominations his "pre-eminence is less clear," says Asia Society Associate Fellow Thom Woodroofe.

"President Obama's choice of Korean-born Dartmouth College head, Jim Yong Kim, to be the next President of the World Bank is too cunning by half," Woodroofe says. "While Kim brings a wealth of experience to the role and a strong commitment to global health, the decision is nothing more than a shallow attempt to demonstrate a decreasing monopoly of control over the role's appointment."

Woodroofe also notes that, if Kim is placed in the position, he and Korean-born U.N. Secretary General Ban Ki-Moon would "occupy two of the world's most powerful roles."

Kim's background will be a factor in how he runs the bank if elected, according to Desai.

"Born in Seoul at a time when Korea was barely recovering from the ravages of war, Dr. Kim also knows from personal experience what it means to have lived in a barely developing nation," Desai says. "His trans-cultural life experience also will come in handy as he navigates the larger global footprint of the World Bank."