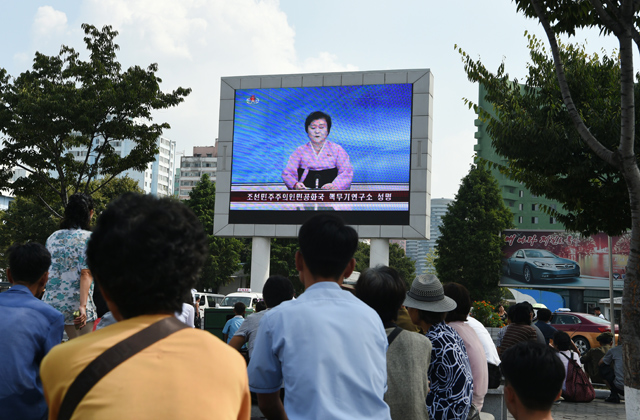 "If we cannot prevent (North Korea's) development of nuclear weapons, the nuclear threat will become a reality soon," Park, who appeared alongside Russian President Vladimir Putin and Japanese Prime Minister Shinzo Abe, said. "In order for Pyongyang to take the decision to abandon its nuclear program, it is important to give it a strong unified message."

The timing of her remarks was uncanny. On Friday, North Korea announced that it had conducted its fifth underground nuclear test, producing a magnitude 5.0 tremor and releasing 10 kilotons of energy. The test is certain tensions throughout the region and complicates international efforts to disarm Pyongyang.

Park, Putin, and Abe were speaking at the Eastern Economic Forum, an event held in Vladivostok intended to promote foreign investment in Russia's Far East. But much of the discussion — moderated by Asia Society Policy Institute President Kevin Rudd — centered around matters of regional security. Prime Minister Abe appealed to President Putin to resolve the two countries' longstanding dispute over the southern Kurile Islands, an archipelago referred to as the Northern Territories in Japan.

“Vladimir, shall our generation not be the one to have the courage to fulfill our responsibilities?” said Abe.

Proposals for enhancing regional security cooperation were discussed at the #EEF2016 @AsiaPolicy pic.twitter.com/jFYF8Lhtej

In the years since North Korea's nuclear program emerged as a major diplomatic crisis, neighboring countries — and the United States — have struggled to devise a multilateral approach to curbing Pyongyang's ambitions. Rudd discussed this problem in a brief video released after the conclusion of the forum.

"The question of the future is: Are we going to have purely bilateral security relations in this region full of frictions? Or can we develop, over time, regional approaches to common security?”