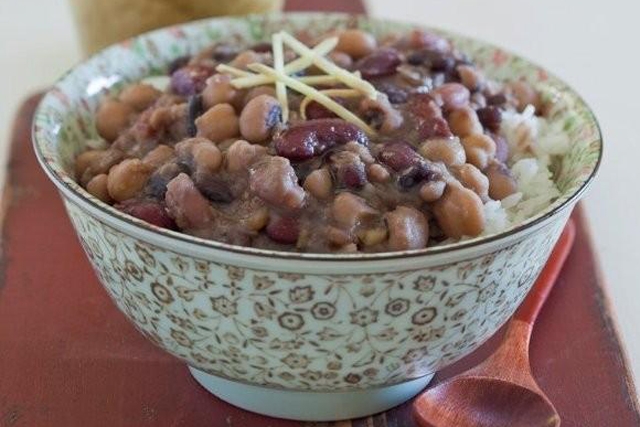 In Nepal, kawatee is eaten during the harsh winters to “warm” and protect the body. Restaurant-owner Roshita Shrestha who hails from Kathmandu recommends it for women during confinement and while breastfeeding. Roshita ate kawatee often after the recent birth of her daughter in Seattle and says it also offers a taste of home. You can use any type of dried beans or legumes to make 2¼ cups total.

Rinse all of the beans and pick out any stones and grit. In a large bowl, soak them in enough water to cover by 2 inches for at least 8 hours. Drain and rinse.

In a large heavy-bottomed pot or Dutch oven, heat the oil over mediumhigh heat until it becomes runny and starts to shimmer. Add the garlic and grated ginger and cook until fragrant, 15 to 30 seconds. Tip in the beans and stir and cook until lightly browned and well coated in oil, 4 to 5 minutes.

Pour in the water and bring to a boil. Reduce the heat to medium. Cover and simmer for about 1¼ hours , or until the beans are tender and squish easily between your fingers.

Toss in the ginger coins and simmer for another 15 minutes. The soup should not be too thick but have the consistency of a thin vegetable stew. Add more water if necessary.

To make the tempering oil, heat the ghee in a small skillet over high heat until it melts and starts to bubble gently. Stir in the ajowan seeds and asafetida powder. The mixture will sizzle and sputter. Immediately stir the entire contents of the skillet into the soup. Add the salt and serve hot with basmati rice.

Pat’s Notes: A tempering oil (called channa or tarka) adds extra richness and depth to a dish. Spices (usually whole) are mixed into hot ghee and allowed to “bloom” before the entire mixture is immediately poured into a dish at the end of cooking.

Ajowan seeds are small ridged seeds that look like celery seeds. They belong to the same family as coriander, cumin, celery, lovage, and fennel. When ground, ajowan tastes and smells like thyme, but is more intense with a peppery backnote. Ajowan seeds can be found in South Asian markets, but if necessary, thyme, cumin, or caraway may be used as a substitute.

Asafetida is a strong onion-garlic flavored powdered gum resin. After cooking, its flavor is like the mildest, mellowest garlic. It does wonders for the digestion, which is why it’s often used in legume dishes. Buy it ground (Vandevi brand) and store in a very tightly sealed container. You can substitute the same amount of onion or garlic powder.