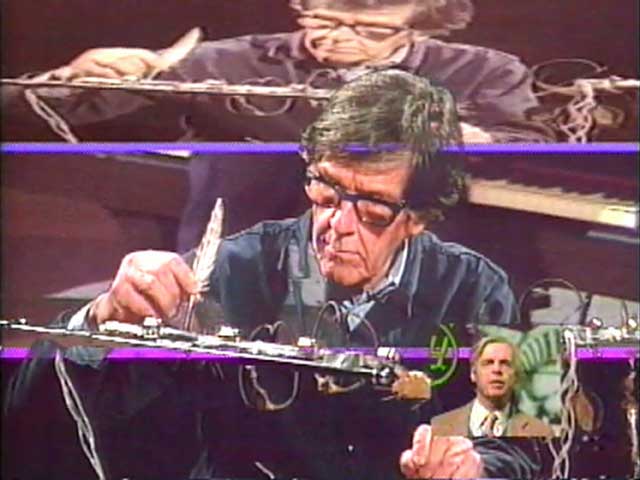 The ability to distort and colorize a video image is a tool we take for granted today, a basic part of programs like Premiere, Avid, and Final Cut. Forty-five years ago, however, when Nam June Paik and his collaborator, Japanese electronics engineer Shuya Abe, created the Paik-Abe Video Synthesizer, they were part of a technological vanguard — one that was developing the earliest machines designed to alter existing video and give it the malleability and expressivity of painting or ink.

Their breakthrough followed a long period of gestation. Paik had been manipulating used TV sets since the early 1960s, and by the time he created Magnet TV (1965) he was already distorting an existing video image — in this case, by placing a large horseshoe magnet on top of a black-and-white set. By 1969, as he wrote in his widely-quoted statement of intent "Versatile Color TV Synthesizer," the artist was envisioning a device that would

enable us to shape the TV canvas

The Paik-Abe Video Synthesizer's new production and postproduction capabilities could transform closed-circuit video broadcasts and prerecorded footage into video collages that ranged in appearance from realistic images to pure, abstract patterns. The synthesizer featured cameras that could feed live-action images while simultaneously accessing computer-generated or film-generated imagery already recorded on videotape or film. These images could be layered, multiplied, or divided within each frame, thus allowing temporal and spatial shifts to proliferate over the course of the video.[2]

The device that accomplished all these feats was a far cry from today's sleek digital hardware. David Atwood, a WGBH television director, later recalled that "The Synthesizer was a collection of the cheapest electronics around, the bare minimum. It was a miracle that it even made an image."[3] In Asia Society's catalogue, the contemporary artist Kenzo Digital (Paik's grand-nephew) memorably describes a later iteration of the Synthesizer as "a hulking ziggurat of monitors, patchbays, and other devices."

That rough-and-tumble aesthetic extended to the machine's function. In a 1975 New Yorker profile by Calvin Tomkins, Paik said of the Synthesizer, "Is sloppy machine, like me." John Godfrey, supervising engineer at the WNET's TV Lab in the 1970s, has added, "And so it was its imperfections that made it work and made it interesting."[4]

The qualities Paik and Godfrey allude to would seem to go hand-in-hand with a democratizing impulse that was always part of the Synthesizer's conception. For all his rhetoric invoking da Vinci and Picasso, Paik dreamed of a tool that would give not only artists like him but also ordinary people access to processes that had been available up until then only at TV studios full of expensive equipment run by professional technicians. To that end, once the Synthesizer was built, its 1970 debut — the WGBH-TV broadcast of Paik's Video Commune, a four-hour live production set to the music of the Beatles — was public in several senses: Paik actually invited passers-by off the street, mid-broadcast, to enter the studio and experiment with the Synthesizer.

As Mary Ann Kearns and others have written, a similar egalitarian bent was evident a year later, when Paik exhibited the Synthesizer at Galeria Bonino in New York City. Visitors were encouraged to perform in front of the camera and then play with their own footage, effectively becoming participants and directors at the same time. Meanwhile, to make the Synthesizer's innovations more shareable among the artistic community, Paik helped create duplicate models of it for WNET/THIRTEEN in New York, Cal Arts, and the Experimental Television Center in Binghamton, New York.

The seminal videos that resulted from the Paik-Abe Video Synthesizer, like the artist's Global Groove from 1973 and Guadalcanal Requiem from 1977, are one part of its legacy. Another is the effect it had on subsequent generations of video artists, perhaps best described by the contemporary American multimedia artist Jon Kessler, in Asia Society's exhibition catalogue: "Paik laid the groundwork for artists like me who play with the apparatus and mechanisms of the medium, turn it in on itself, and come through the rabbit hole still believing that it's possible to make engaging, playful, and serious work."

For anyone who wants to learn more about Nam June Paik and the role of emerging technologies in contemporary art, a panel discussion tonight at Asia Society New York brings together exhibition curator Michelle Yun; Tim Griffin, Executive Director and Chief Curator of The Kitchen; and Barbara London, who founded the video exhibition and collection programs at the Museum of Modern Art, for a talk on the evolution of new media art from its inception to the present day. Click here for complete details and ticket information. The program will also be a free live webcast at AsiaSociety.org/Live at 6:30 pm New York time.