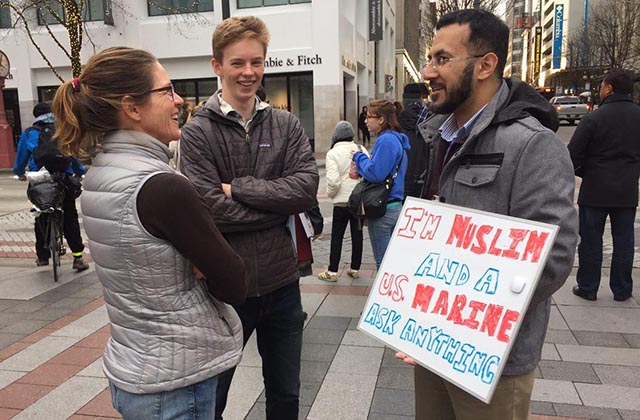 During the 2016 American presidential campaign, amid heated rhetoric regarding terrorism and Islam, hate crimes against Muslims reached their highest levels since after the September 11, 2001 terrorist attacks. Mansoor Shams, a Pakistani-American Muslim who immigrated to the United States with his family at age six, served in the U.S. Marine Corps. from 2000 to 2004 and felt like he had to "come out of his cave" to address the deteriorating environment for people of his faith. In the summer of 2015, he launched the website Muslimmarine.org, where he encourages people to email him with questions about Islam and engage him on a "human level."

More recently, Shams has begun giving speeches to address misconceptions about Muslims and has even taken to the streets throughout the country with a sign that reads "I'm Muslim and a U.S. Marine. Ask anything" in order to engage with anyone who might be passing by. In an interview with Asia Blog, Shams discusses how he's been received and how his status as a Marine veteran helps chip away at misconceptions.

What was it like being a Muslim in the Marines, particularly around the time of 9/11?

On April 20, Asia Society in New York will host a discussion on the role of the faith in governance, public life, and terrorism, and how governments — especially those under pressure from a fearful or ill-informed population — can best engage their Muslim populations.Learn more

I decided to join the U.S. Marine Corps after high school, which I would say was very natural. It was very Muslim of me and very American of me. I never really thought twice about it until recently when people would ask me if that's compatible with my religion. It never occurred to me until people threw it in my face. Of course it's compatible. Love of one's country is a part of my faith as taught by the Prophet Muhammad.

I spent four years in the Marine Corps. It was a pretty decent experience overall. There's no doubt that after 9/11, some things changed a bit. There were small jokes, like people calling me Taliban, Bin Laden, terrorist, and things of that nature. The way I nipped it in the bud was I sort of laughed it off in the beginning, but then I felt I needed to address it because if I didn't maybe it would head down an area where this would become the new norm. I can tell you that in at least a few cases after 9/11, there were some people — even with this Marine Corps creed of brotherhood, unity, all as one big family — that took a little bit of an issue with who I was. I saw that in their behavior. But I also made some very awesome lifelong friends.

What prompted you to start standing outside with your sign?

The sign is another addition to the larger goal of spreading positivity and showing people the true face of Islam through my service as a United States Marine, because I know that resonates with people. They connect with that, have a respect for that — at least most people do. Several months ago, a person in the Ahmadiyya Muslim community took a sign around that said "I'm a Muslim, ask me anything." I was inspired by that initiative and thought that I needed to do it with my own little twist. I was thinking about it for some time and eventually got the courage and just did it.

In the time that we live in, Muslims, unfortunately, have such a bad wrap so it was important for me to come out of my cave and show my fellow Americans another side that they need to know about. As a proud Muslim American United States Marine veteran, I'm doing a service for my country. I did a service to my country with my life from 2000 to 2004 and today I get to do a service to my country by bringing a message of positivity and trying to unite everybody as one America, regardless of what your faith, color, tradition, or background is.

I've been very fortunate that it's connected really well with a lot of people. I’ve been to Texas, Colorado, Oregon, Washington, New York, and Maryland. Next, I'm headed to Kentucky, then Tennessee, Alabama, Georgia, Pennsylvania, and New Jersey. I have a goal to go to as many states as possible with my sign and give speeches. 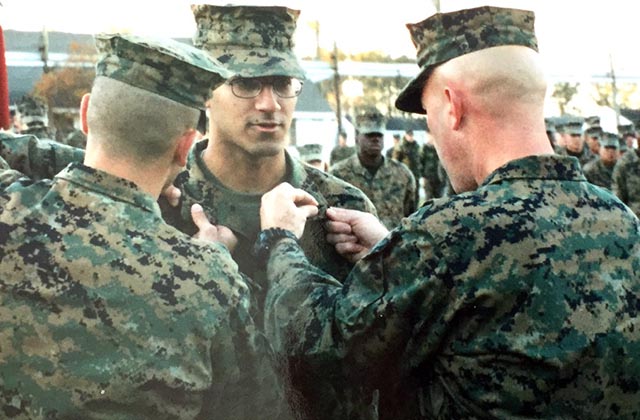 What are some of the encounters that stick out most in your memory?

I had an experience in Texas where a guy sort of stared me down and I just shrugged and laughed it off with one of my friends. But then he came charging at me and said, "What did you say to me?!" I told him that he had given me the evil look and eventually it led to an amazing conversation where we became friends. He was a nurse practitioner — an educated guy. He said that he hadn’t read the whole sign, only the Muslim part (laughs). I couldn't believe it. I was like, "Seriously man, so if I wasn't a Marine ... " He replied, "I know I know, please help me, educate me. I'm so sorry. I've been played like a pawn." He realized that he had been taught to be divided, and these divisions are breaking us apart as basic human beings. We exchanged phone numbers and on the spot we became friends.

For the most part, I'd say I've encountered good people — people who have supported me either through high fives, smiles, or an email. But I do know that the other side also exists because I see that on my social media feeds. Some people email me and say things like "You're not even a Marine" or "you're the most dishonorable Marine I've ever seen." That’s fine and I'll engage with them for two or three emails in a positive way, but if I see it's not being constructive, then I just sort of stop. You have to let that person be as they want to be.

It will be interesting when I go to the southern red states. I want to target smaller towns because I feel a lot of those people unfortunately just haven’t ever met a Muslim. I think that's really what it is.

What are some of the most common misconceptions you encounter about Muslims among those who come talk to you?

I think the biggest one, in general, is just when people don’t even take a moment to see me as another human. They see a guy who looks like me with brown skin and a beard and assume that I'm a terrorist, associated with ISIS, the Taliban, or things of that nature. But that guy could be a family man, he could be a normal human being, he could be a United States Marine for God's sake. Unfortunately, the state of our nation has created this image that certain people who look like this or follow this faith are a certain way.

A lot of questions are related to Sharia Law, which literally means "a path to life-giving water." It’s just a moral code. Like 90 percent of the time they don't even know what they're saying, they just use the word as if they've studied it for the last ten years. You want to laugh it off but at the same time, you have to see that in this person’s mind, they sincerely believe that I'm there to kill them or something. Some people really believe this.

Do people with these attitudes usually change their opinion to some degree after talking with you?

Yes, for the most part … if they give me that moment to have a conversation and engage. Some have a hesitancy and skepticism, but when they do engage, I do believe that things usually go in a positive direction. I'm not targeting their specific faith or belief system. I don't care if they voted for President Donald Trump or believe everything he says. I want to go after their moral compass as a human being and connect at the human level as part of the larger human family.

Meeting me has to be a head-scratcher for someone who holds a terrible outlook towards Muslims. “How can it be that you have ISIS on one hand and then this guy who also claims Islam who's a United States Marine. Is there something in my ideology that's flawed? Have I misunderstood something?” As the gentleman from Texas said: "I’ve been played like a pawn."

With the direction our country is headed, I feel like that's my responsibility — to help bring America back to its basic principles that everyone is created equal with the opportunity for life, liberty, and the pursuit of happiness. Why does everyone want to come to America? Because it's so awesome, but I feel like it's turning away from some of its core values.

One gentleman asked, "How do you feel now being a Marine with the way your country is treating you?" I told him that I don't allow one person or group to define my America. Just like I don't allow some group like ISIS define my faith and the faith of 1.6 billion-plus Muslims around the world. Yeah, we have a rocky side, but that's not what all Americans are like. Trump said certain things about Muslim bans, but not everybody agrees with him. After the initial travel ban, I saw people at airports who don't look like me, follow the same faith as me, who have completely different lives, and they're at airports defending me. It shakes you to the core. How awesome is that? How could I not defend that America? How could I not love that America and put my life on the line for it?