Most of World Favors Obama Over Romney in Landslide; Why is Pakistan Different? | Asia Society Skip to main content

Most of World Favors Obama Over Romney in Landslide; Why is Pakistan Different? 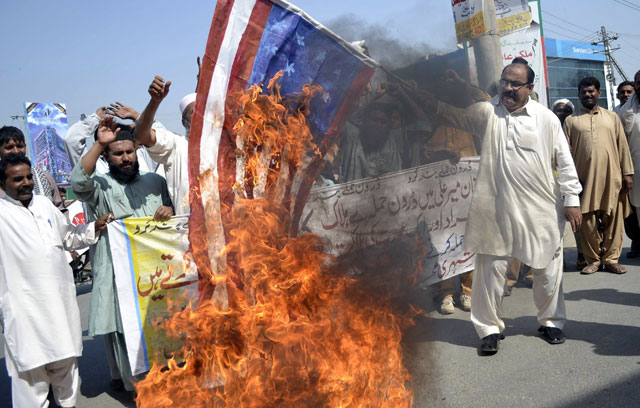 A Pakistani United Citizen Action demonstrator holds a burning US flag during a protest in Multan on October 25, 2012 against the US drone attacks in Pakistani tribal areas. (S.S. Mirza/AFP/Getty Images)

U.S. President Barack Obama would win the upcoming Nov. 6 election by a landslide if the rest of the world were allowed to vote, according to a recently released BBC World Service opinion poll. In a survey of 21,797 people in 21 countries, 50 percent of the respondents favored Democrat incumbent Obama, with 9 percent supporting Republican challenger Mitt Romney in the run up to the U.S. elections.

Twenty of the 21 countries favored Obama, often heavily. The only country to break the unanimous international trend? Pakistan, where respondents favored Romney over Obama.

This shouldn't come as a surprise to observers of U.S.-Pakistan relations. There is a perception in Pakistan that Republicans tend to be more generous in terms of aid and international support to Pakistan. This is part of a historical narrative that started in the 1980s, when the Reagan administration channeled aid to Pakistan and leveraged Pakistani agencies to arm and finance Afghan militants to defeat the Soviet Army.

In the 90s, when the Democrats were in power, U.S. aid to Pakistan plummeted and relations grew colder after Pakistan tested a nuclear bomb. Things changed after 9/11, as the Bush administration and the Musharraf government became close allies in the fight against terrorism. As a front line state in the war on terror, Pakistan once again became a beneficiary of American aid and international support.

The Obama administration, despite making serious efforts to enhance aid to Pakistan, continues to be unpopular in Pakistan due to its decision to dramatically expand the use of drone strikes inside Pakistani territory. In the final analysis, Obama's image suffers most in Pakistan due to his inability to deliver on the "hope for change" he generated during 2008's election campaign. At the time, many Pakistanis believed that Obama would reverse Bush's foreign policy in the region after coming to power.

Four years later, Obama has failed to live up to the aspirations Pakistani people projected onto his presidency. "Obama is a more sophisticated version of Bush," argues veteran journalist Talat Hussain.

"The world's schmaltzy 2008 romance with change is over," wrote Ejaz Haider, a senior Pakistani journalist, in a recent op-ed piece for a national newspaper. "Four years of realism have buried that optimism. If Obama loses, not many would shed tears at his loss; if Romney wins, there will be no tears of joy."

Haider's position echoes the most interesting qualitative insight to emerge from the BBC poll: Romney only has a slight lead over Obama in the Pakistan poll, with a significant number of people choosing not to respond to the question. Pakistanis realize that both candidates don't differ significantly when it comes to their foreign policy for the region and this time they're not getting their hopes too high.

This would explain why an image of an anti-war protestor is being shared widely by Pakistanis on Facebook. The protestor is holding up a placard which reads:

No matter the outcome of the U.S. election, Pakistanis are bracing themselves for more of the same.