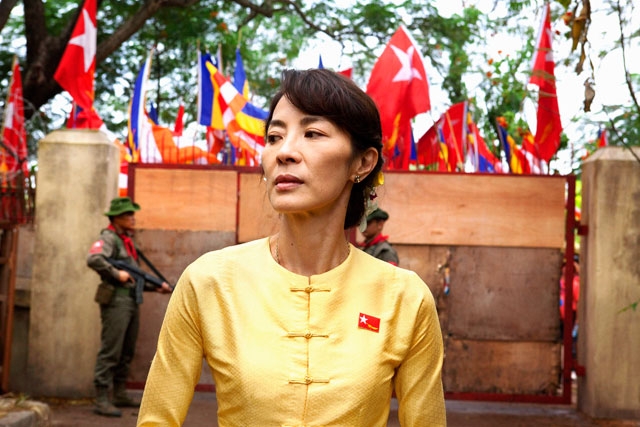 With Burma in the spotlight after Secretary of State Hillary Clinton’s historic visit last week and Aung San Suu Kyi’s plan to run in upcoming parliamentary elections, a new film by Luc Besson (The Fifth Element 1997, La Femme Nikita 1990) is set to shed light on Suu Kyi's personal story, with Michelle Yeoh in the leading role.

The Lady tells the extraordinary story of Suu Kyi and her British husband Michael Aris. The film's title is the nickname bestowed upon Suu Kyi by the Burmese people, who see her as a beacon of grace and courage, in particular for the huge personal sacrifices she has made in fighting for Burma’s freedom.

The movie will screen at Asia Society New York next Sunday, December 11, and will be followed by a Q & A with Yeoh and Besson.

Yeoh, a Malaysia-born, ballet-trained actress who became a Hong Kong screen sensation for performing her own stunts in films such as Yes, Madam! (1985), Police Story III: Supercop (1992) and The Heroic Trio (1993), gained international fame portraying a Bond girl in Tomorrow Never Dies (1997) and a martial arts heroine in Crouching Tiger, Hidden Dragon (2000). On screen, Yeoh radiates both toughness and femininity. There is a gentleness embodied in every action role she plays.

When Yeoh received the script for The Lady by Rebecca Frayn in 2007, she was deeply moved by Suu Kyi’s story of love and sacrifice and knew right away that it would offer the role of a lifetime. She immediately brought the script to Besson’s attention. Equally touched by the story, Besson agreed to direct the film. His company EuropaCorp also signed on to produce the film.

It is hard to think of anyone else to portray Suu Kyi, the Nobel Peace Prize laureate who spent some 15 years under house arrest in Burma — not only because Yeoh has a track record of playing female figures who embody great strength, but also because she and Suu Kyi share a startling physical resemblance.

But Yeoh knew that was not enough to portray such a significant real-life figure. In order to prepare for the role, the actress went through 200 hours of videos of Suu Kyi in order to acquire her body language and demeanor. She spent months studying Burmese in order to deliver lines in the language, including the historic speech Suu Kyi gave at the Shwedagon Pagoda in 1988.

The actress even successfully obtained a visa to visit Burma and met with the Lady herself. Yeoh was struck by Suu Kyi's warmth and generosity. As she explains in the film's official production notes, “No matter how petite she looks, she exudes amazing strength. More than anything else, I felt like I already knew her, like she was an old friend because I’d been watching her so intently and she was exactly what I figured she would be."

Yeoh has made it. This is no doubt her most powerful performance to date. I say: Michelle, you are The Lady!