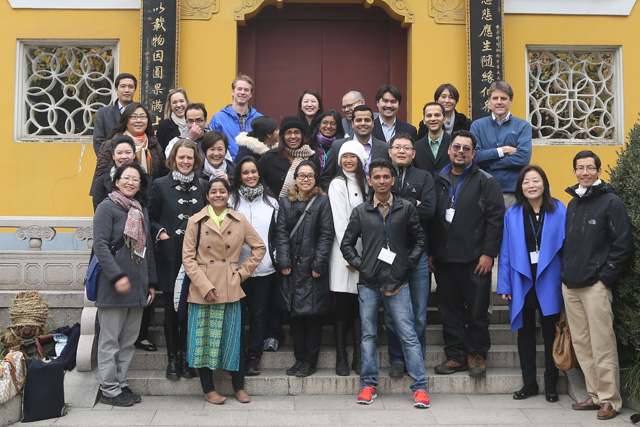 The new class of Asia Society Asia 21 Young Leaders had just arrived for their “summit” in the Chinese city of Zhenjiang when word came that Nelson Mandela had died. The news broke in the early morning, and over breakfast conversations turned to Mandela’s achievements, and his great gifts as a leader: integrity and humility, quiet perseverance and boundless courage.

“We have so much to learn from that man, the way he lived,” said Pandu Sjahrir, CFO of a leading Indonesian mining company.

Later, an Asia 21 veteran — Sonam Tashi, chief planning officer for Bhutan’s Ministry of Economic Affairs — asked that the group pause for a few moments of reflection. “When people called him a saint, Mandela said ‘I am not a saint, unless you think of a saint as a sinner who keeps on trying.’ We must all keep trying to improve the world,” he said. Then all 100 young leaders rose, bowed their heads, and spent a minute in silence.

It was a moving tribute, one of many powerful moments in a three-day gathering aimed at bringing great minds and talent together to tackle issues across the Asia Pacific. This was the eighth such summit for the Asia 21 network — a group created by the Asia Society that now numbers more than 800 leaders, representing over 30 countries and all manner of professional backgrounds. Thirty new young leaders and roughly 70 members of past classes were in Zhenjiang, the first time Asia 21 had come to China.

“It’s just an incredible group,” said Tania Hyde, a former Australian Air Force officer who now serves as a director at Sydney-based Taylor Street Advisory. “There’s so much brain power and variety of experience in that one room.”

Over the three days, that brain power was put to use in different ways. The group discussed best practices for leaders generally; reported on recent progress and future plans for country-specific leadership groups (there are already Afghanistan 21 and India-Pakistan 21 spinoffs); and cross-sectoral teams planned projects for the year ahead.

More on those projects below, but perhaps most powerful at the Zhenjiang conference was a session devoted to “Moments of Truth,” namely those light-bulb moments the young leaders identified as crucial, even life-altering, on their own paths to leadership.

Sabhanaz Diya, from Bangladesh, came to the microphone and told a harrowing story of having been molested for years as a young girl. “I was four-and-a-half when it started, with an uncle and then another man, and it went on for years,” she said. In all that time she never spoke up, afraid and unsure how or to whom she should complain. “And I was from a well-to-do family, best schools, the whole thing.” Diya said the experience steeled her as a leader and motivated her to found the One Degree Initiative Foundation, which has won global acclaim for empowering young people through mentoring and social entrepreneurship. “Those experiences led to this, my life’s work,” Diya said. “And they taught me to be tough.”

It seemed a difficult story to follow, but Indian entrepreneur Navneet Singh Narula came forward with his own remarkable “moments of truth.” Navneet had come to the U.S. at 18, a visa lottery winner with boundless energy but only $93 in his pocket and no real plan for his future. “I didn’t know anything,” he said. He spent nine days at the home of an Indian taxi driver; took menial jobs; discovered he could — for the price of a cup of coffee — sit in a bookstore all day, and wound up reading about and then winning a scholarship to Michigan State; he flourished for a time at college, only to suffer a brutal hazing that left him bloodied and beaten, physically and mentally.

“I was lost,” Navneet told his Asia 21 colleagues. “Back to square one.” Navneet found early professional success at Accenture, and when the 2004 tsunami struck southeast Asia he requested leave to go and help. The request was denied but Navneet went anyway, stayed for several weeks and wound up adopting a boy he met in Aceh, Indonesia, who had been orphaned by the storm. Since then Navneet has led humanitarian efforts for victims of Hurricane Katrina and earthquakes in Japan, Chile and Pakistan totaling $500 million, and been honored with the U.S. Presidential Lifetime Volunteer Service Medal. Today Navneet is CEO of nBrilliance, which focuses on leading global innovations for Fortune 500 companies.

“I learned many things from these experiences,” Navneet said. “I learned that trying to fit in is not always the answer. And above all I learned that whatever things you achieve, there has to be a bigger reason we are here.”

The new Asia 21 class is studded with overachievers. They have saved the lives of HIV patients in India; saved cultural treasures in Myanmar; and — less poignant but important nonetheless — a Pakistani lawyer has fought to save YouTube and Blackberry in his country. Class members have created a news network in China; an environmental protection network in Vietnam; and an international film festival in Pakistan. Many have harnessed new technology for powerful impact: a solar-powered cooker for Himalayan villagers, who often suffer respiratory illness or worse from cooking in their homes; in the Philippines, internet technology that teaches blogging to slum children; and in India, the use of SMS texting to help more than 120 million people gain access to the internet.

That latter project is the brainchild of new Asia 21 Young Leader Deepak Ravindran. I spent some time with Deepak in Zhenjiang, and, while one might say this of any in the Asia 21 group, I would suggest you remember his name. Deepak was in his late teens when he asked a friend for advice on how best to pursue a certain young girl. You can Google that and get answers, his friend said. Deepak’s odd “moment of truth” came when he found that he and millions more in India had no Internet access and thus no entrée to Google. What people did have were cellphones, and that led Deepak to his SMS idea, and the creation of a mobile technology company called Innoz. That in turn sparked another dream — the building of a “startup  village” in Kerala, in southern India. The goal was to help launch 1,000 small companies in a decade; in just 18 months, Deepak’s village has already launched more than 1,100 startups. Deepak Ravindran is 25 years old.

Asia 21 exists not only to gather these remarkable people, but to leverage the power of the network to maximum effect. Not surprisingly, sparks of innovation, business-building, and problem-solving fly when these people get together. Jo-Ar Herrera, Asia 21 Class of 2007, is now commandant of the Philippines Civil-Military Operations School, and he reported on how Philippine members of Asia 21 had joined forces to bring a variety of help to the victims of Typhoon Haiyan: medical teams deployed, fundraisers held, on-site volunteer work, and counseling for children. Herrera himself managed the collection and distribution of relief organized by the Philippine Army.

The typhoon-relief discussion sparked a conversation about how best to activate Asia 21 “rapid-response teams” for future crises. Physician and disaster-relief specialist Satchit Balsari, Class of 2010, suggested that those in the network with relevant expertise present “disaster drill” best practices to nations or cities across the region.

There are many other Asia 21 collaborations in progress: The Afghan 21 chapter is working on “Ten Ideas For the Next Ten Years,” a series of projects designed to help their nation once international forces are gone. The group’s 40 members have planned mini-summits for other young leaders around the country, organized a town hall in Kabul to encourage people to vote in the April elections, and they are preparing position papers for the presidential candidates. “The youth are the best reason for hope in my country,” Sulaiman Akbari, head of Mercy Corps in Kabul and a member of the 2013 Asia 21 class, said in Zhenjiang. “We are working to be sure the next government hears from our young leaders.”

Also this year: Phloeun Prim, a Cambodian from the Asia 21 Class of 2012, spearheaded the major cultural festival Seasons of Cambodia, which came to New York with considerable fanfare and acclaim in May. Humaira Bachal (Class of 2013) founded the Dream Foundation Trust, a non-profit to help girls in rural Pakistan, with the help of Sharmeen Obaid Chinoy (Class of 2011), an Oscar-winning filmmaker. Sharmeen produced a beautiful short film for the new enterprise, which was shown to the group in Zhenjiang. “The Asia 21 connection has made so much possible for us,” Humaira said.

Meanwhile, the India-Pakistan group has completed a slick set of videos to be shown across India and Pakistan, videos which promote cultural engagement, exchange programs and a sea change in how the two countries view each other and the cost of this ongoing conflict. Last spring, the 2012 Asia 21 class traveled as a group to Bhutan in the spring, introducing hi-tech infant warmers to the Health Secretary and to medical practitioners, and conducted workshops on leadership for managers of Bhutanese civil society organizations.

Before leaving Zhenjiang, the group laid plans for 2014 projects, and a collective pledge to do what the conference agenda had urged — namely, to turn “Passion To Action.”  “We are all busy people,” Satchit Balsari told me afterwards. “But when we put our minds to it we can use Asia 21 to great effect. And we will keep doing so.”