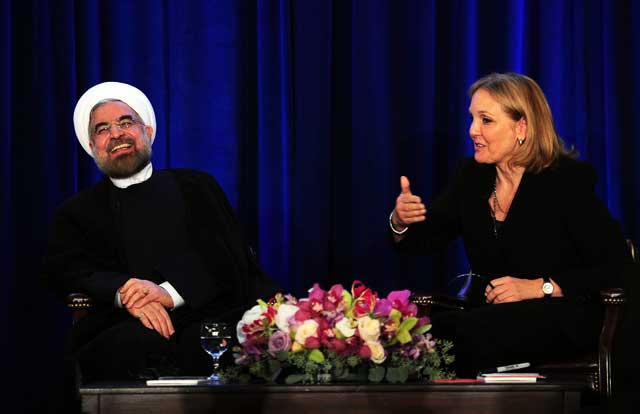 As the international community watches for developments in another round of nuclear talks today between Iran and six world powers, including the United States, The Wall Street Journal ran a front-page story by Jay Solomon and Carol E. Lee looking at the long trail of quiet diplomacy leading to the direct U.S.-Iran engagement, and noted the role of Asia Society’s Vice President of Global Policy Programs Suzanne DiMaggio in facilitating unofficial communications between the two countries.

“The intricate communications network helped propel the recent steps toward U.S.-Iran rapprochement,” write Solomon and Lee. The article goes on to note DiMaggio’s behind-the-scenes work, as well as the organization of an event with Iran's President Hassan Rouhani and Foreign Minister Mohammad Javad Zarif on the sidelines of the United Nations General Assembly in September. The report continues:

Ms. DiMaggio of the Asia Society says she was among those in New York who contacted Mr. Zarif shortly after he was brought in to the Rouhani government. A veteran facilitator of informal contacts between Iranian and American officials, she held numerous meetings over the past decade with the U.S.-educated diplomat on ways to end the nuclear impasse.

This time, she says, it was immediately clear Mr. Rouhani's government was significantly altering Tehran's negotiating framework and might be willing to accept some of the nuclear limits the West was demanding in exchange for sanctions relief.

The Journal quotes officials saying “major differences still need to be bridged” before reaching an agreement, but that relations between the countries have changed significantly in the past year.

"It was clear to me that the Iranians were describing an endgame to the crisis," DiMaggio is quoted as saying in the piece. "I thought it was well worth testing."