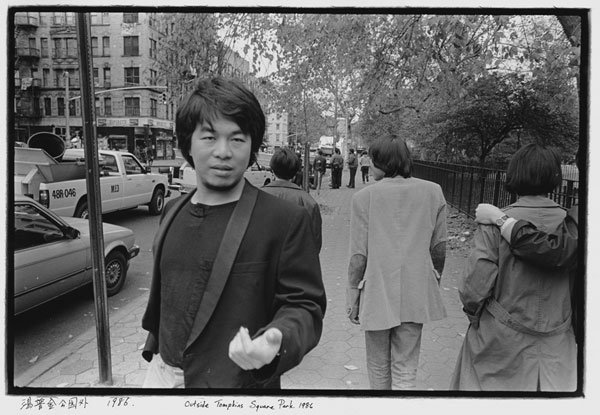 Commenting on the exhibition, the New York Times Lens blog posted, "This week, the exhibition opened at the Asia Society Museum in Manhattan, ending uncertainty as to whether it could go on at all while Mr. Ai was in detention."

Long before Ai Weiwei, 54, became famous for his hand in creating the Bird's Nest stadium for the 2008 Beijing Olympics, he was a struggling artist living in Manhattan's East Village. Ai himself selected the 227 black and white photographs on display out of an archive of 10,000 pictures from his time in New York in the '80s to the early '90s — "a period which helped shape his art and his politics," reported the BBC.

This is the first time Ai's New York photographs have been displayed outside of Beijing.

Watch a BBC video about the exhibition:

Living in New York and seeing protests there gave Ai "a strong sense of the power of the individual," according to Melissa Chiu, museum director at Asia Society, in a New York Observer article.

Ai captured not only portraits of himself and his circle of friends, from fellow Chinese artists (composer Tan Dun, famous for Crouching Tiger, Hidden Dragon's soundtrack, for example) to Allen Ginsberg, but also of social upheaval and change at the time. On the gallery walls are images of police brutality at a protest in Tompkins Square Park and political figures such as former president Bill Clinton and Rev. Al Sharpton.

"The pictures are as much of a portrait of Ai Weiwei as they are of New York City at the time," said Chiu.

One gallery attendee agreed with Chiu's statement, seeing in the photos what had changed and what had stayed the same since the photographs were taken.

"Having lived there in the East Village during that time, this was a blast from the past," he said.

Ai Weiwei: New York Photographs 1983-1993 will be on display at Asia Society New York until Aug. 14. WNYC calls it a "must-see" event, and it also comes highly recommended from NY1 and Bloomberg. See more media links below.