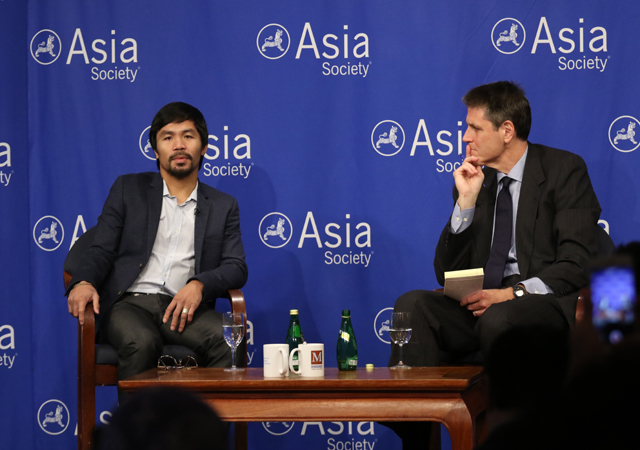 Manny Pacquiao remains very active in the world of boxing. In May, the Philippine welterweight lost a much-publicized fight against Floyd Mayweather Jr., due in part to an injured shoulder. And on Monday, appearing at Asia Society in New York, Pacquiao told reporters that his shoulder was "80 to 90 percent healed" and that he would be ready to fight again next March. But throughout the 36-minute press conference, Pacquiao spoke at length about his post-retirement plans. A member of the Philippines House of Representatives since 2011, Pacquiao has announced his intention to run for a Senate seat and hasn't ruled out an eventual try for the presidency. This political ambition is, in a sense, surprising: Pacquiao himself admitted that he originally "hated politics," comparing it to "a boxing match." So why bother? Pacquiao explains:

"I want to help people who are starving, who are hungry," he said. "I feel what they're feeling because I've been there."

Pacquiao said that his impoverished childhood informed his political beliefs. "The most important thing [a person needs] is shelter and then a sustainable livelihood," he said. "It's not enough to just give people money."

Pacquiao's fighting has contributed to his enormous popularity in his home country and across the world. This, combined with his philanthropic efforts, led Asia Society to recognize him as its 2015 Game Changer of the Year on Tuesday night. But the boxer would like to be remembered for his accomplishments outside of the ring.

"One day, when I'm gone from this world, my legacy will be that I helped people."